You are here: Home / Blog / Great Escapes: Newspaper Rock National Historical Site
This post may contain affiliate links or mention our own products, please check out our disclosure policy here.

One of Utah’s best-preserved panels of Indian rock writing is usually bypassed by hurried travelers, which is unfortunate given the peaceful setting and ease of access. Located about 12 miles west of U.S. Highway 191 between Monticello and Moab, on Highway 211 leading to the Needles District of Canyonlands National Park, Newspaper Rock National Historical Site is one of the few petroglyph panels that you can literally drive right up to— no hiking required. Since this mixture of human, animal, and abstract forms can be seen and photographed up close, plan to stop and take a look at these amazing and perplexing 2,000+ year-old rock carvings.

Surrounded by towering cottonwood trees, Newspaper Rock features a 200 square foot area of extremely dense Native American petroglyphs inscribed into desert varnish, a blackish manganese-iron deposit that gradually forms on exposed sandstone cliff faces. Vandals have added a few of their own scribblings, but those are easy to spot and disregard. Concentrate on the real carvings, which are thought to have been made by the Anasazi (AD 1 to 1300), Fremont Indians (AD 700 to 1300) and Navajo (AD 1500 onwards). Newspaper Rock is about 250 feet tall, but the glyphs are located at its base, with only a chain-link fence to remind visitors not to touch. 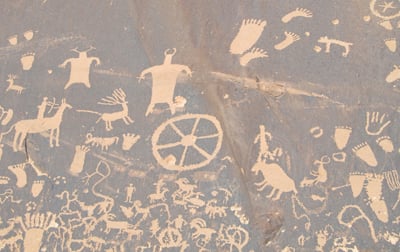 Although many theories exist as to what each symbol means, “The Rocks Begin To Speak” written by Douglas LaVan Martineau is one of the best books to read if you want to better understand petroglyphs. Contrary to many archeologists, the author uses a combination of cryptography (the encoding and decoding of secret communications) and his own upbringing (an orphan adopted into the Paiute tribe of southeastern Nevada and southwestern Utah), to provide evidence that petroglyphs are important Indian writings and not decorative rock art. Each glyph has a meaning, and read together, is a story about actual events or warnings.

If you visit several petroglyph sites throughout your travels, you’ll start to see patterns emerge— some of the same dots, squiggles, footprints, sheep-like figures, and more are used repeatedly to mean the same thing at different locations. Some images seem logical— touching arrowheads representing war or hostility. Other symbols are more conceptual such as spirals denoting directionality, and pointy animal horns representing strength, not an actual mammal.

Listed on the Register of National Historic Places, Newspaper Rock was designated a state historical monument in 1961. It is FREE to visit, open year-round, and worth a stop whether you think petroglyphs are meaningless ancient graffiti, or a real ancient language waiting to be fully decoded.