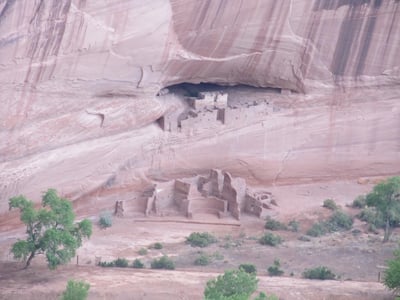 More than 700 prehistoric ruins have been found in Canyon de Chelly National Monument. Constructed between the 11th and 13th centuries in alcoves high above the canyon floor, it is still unclear why the ancient ancestors of the Navajo, the Anasazi, built in such inaccessible locations. Perhaps it was to avoid floods or evade enemies? No one knows for sure. The most well-known cliff dwelling in the canyon is the White House ruin, located along the South Rim Drive. For the best view from White House Overlook, use binoculars or your camera’s zoom. You can also get a closer look via a 2.5-mile round trip hiking trail that descends 600 feet to the bottom of the canyon. The White House Trail is the ONLY place you can enter Canyon de Chelly without a backcountry permit and an authorized guide. 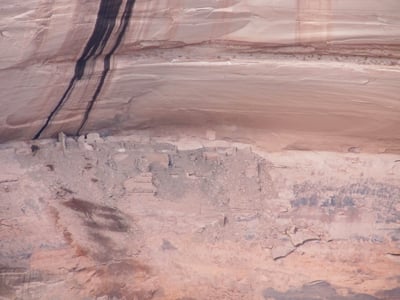 Sliding House Overlook is another chance to see ancient ruins that were built more than 700 feet above the canyon floor. These ruins were built on a narrow shelf and appear to be sliding down into the canyon. Inhabited from about 900 until 1200 A.D., Sliding House once contained between 30 and 50 rooms. 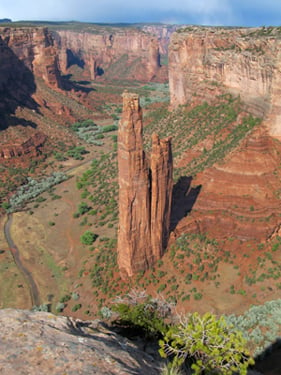 At the end of the Canyon de Chelly’s South Rim Drive is the 800-foot twin rock towers known as Spider Rock. According to Navajo legend, this is the home of Spider Woman, one of the most honored deities. Spider Woman has two important roles: one as the teacher of weaving, the other is to enforce obedience in children. Navajo kids are told that if they do not behave, Spider Woman will carry them away to be eaten. The top of Spider Rock is supposed to be white because of the bones of children. Are you traveling with kids that try your patience? This might be a good time to share the story of Spider Rock!

The park is a non-fee area.

The Visitor Center is open daily all year from 8 a.m. to 5 p.m., except for Christmas Day. The North and South Rim Drives and the White House Trail remain open all year.  The drives are paved roads.