You are here: Home / Blog / The 19th Hole: Teeing it up Cowboy Style in Cody, Wyoming
This post may contain affiliate links or mention our own products, please check out our disclosure policy here.

by Rick Stedman
September 8, 2012Filed under: 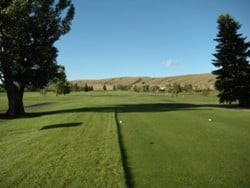 With all the magnificent natural settings in Cody, whose elevation is just about a mile above sea level, there’s a lot to explore in the surrounding area. Don’t miss the following:

Heart Mountain Relocation Center on the outskirts of Cody is something every visitor must see. During World War II, the U.S. government rounded up Japanese-American citizens from their homes on the West Coast – mostly from Washington and California – and placed them in 10 internment camps located throughout the West. From August 12, 1942 to November 15, 1945, Heart Mountain housed in excess of 14,000 Japanese-Americans, which at that time, was the third largest community in Wyoming.

Col. William F. Cody opened the landmark Irma Hotel on Nov. 1, 1902, naming it for his daughter. The dining room is graced by a priceless cherry wood bar which was a gift from the Queen of England. The hotel operates year round and is on the National Register of Historic Places.

For a complete listing of Cody offerings, visit http://www.yellowstonecountry.org/.