You are here: Home / Blog / Great Escapes: Seamen’s Bethel
This post may contain affiliate links or mention our own products, please check out our disclosure policy here.

In his famous book “Moby-Dick” Herman Melville wrote “In this same New Bedford there stands a Whaleman’s Chapel, and few are the moody fishermen, shortly bound for the Indian Ocean or Pacific, who fail to make a Sunday visit to the spot. I am sure that I did not.”  While the story itself is fiction, much of it is based in fact, including the small church on Johnny Cake Hill now called the Seamen’s Bethel. The author, who came to New Bedford, Massachusetts in late December 1840 and stayed until he sailed out on the whaleship Acushnet on January 3, 1841, did indeed attend services here. You can, too, or at least stop by for a quick and free tour. The pew where Mr. Melville sat is marked in the southeast corner. 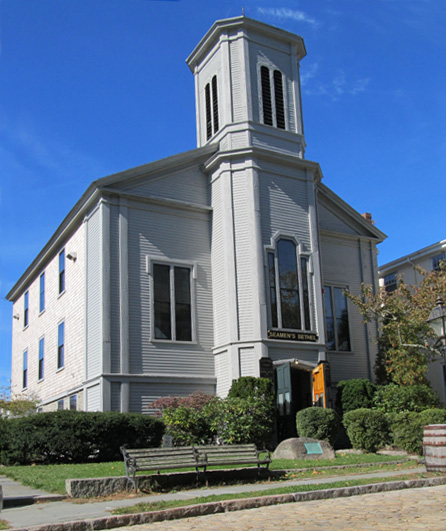 Built in 1832 by the New Bedford Port Society for the Moral Improvement of Seamen, the small sanctuary’s purpose was to provide a moral oasis amidst the tempting taverns, gambling dens, and brothels that lined the waterfront. Like Melville, who was 21 when he came to New Bedford looking for adventure, many young men had no family or friends here. Many were also illiterate. The nondenominational Bethel was not only for saving souls, it was also a place for sailors to attend classes in reading, writing, arithmetic, and navigational skills. Perhaps its greatest purpose, though, was as a visible memorial to men who lost their lives at sea.

Thirty-one cenotaphs line the walls of the Seamen’s Bethel. They look a bit like gravestones for good reason—when a whaleman was buried at sea, his family and friends had no grave to visit. But a cenotaph (Greek for “empty grave”) could be purchased and provide a place for loved ones to pay their respects. “It needs scarcely to be told, “ Melville penned, “with what feelings, on the eve of a Nantucket voyage, I regard those marble tablets, and by the murky light of that darkened, doleful day read the fate of whalemen who had gone before me.” Reading the tablets today gives good insight into the dangerous life aboard a whale ship. One cenotaph tells of a young man who died after being bitten by a shark, others give accounts fatal illnesses contracted in foreign ports. 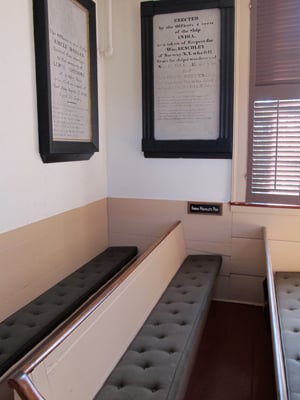 Ironically, the one descriptive element in “Moby-Dick” that helped to make the Bethel famous is pure fiction. Melville wrote of a prow-shaped pulpit from which Father Mapple delivered his fiery sermon on Jonah and the Whale. But there was no such ship-shape pulpit— not originally anyway. It wasn’t until the movie came out in 1956 and tourists flocked to New Bedford, disappointed to find an ordinary looking podium, that a mock-up was made of the one described in the book. Visitors loved it, and so it remains today— a focal point of the Seamen’s Bethel that has endured for more than 180 years. 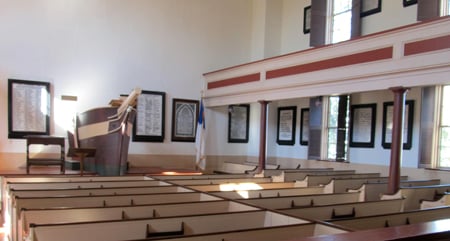