You are here: Home / Blog / Adventures in RVing: Boondocking Disappointment!
This post may contain affiliate links or mention our own products, please check out our disclosure policy here. 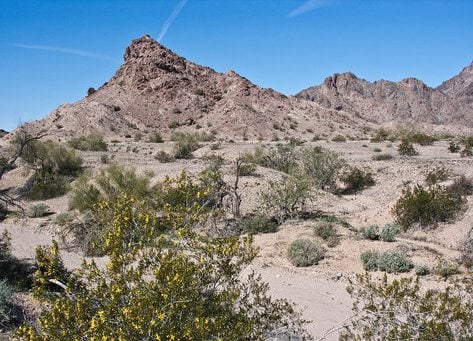 If you have been following this blog over the past several years, you know I am a big fan of using Google Earth to locate boondocking campsites in advance. Ninety nine percent of the time the information I have gleaned in advance from Google Earth is what I find upon arriving at a chosen site. However, there is that one time out of a hundred when things are not as expected. Let me share one of my recent misadventures with Google Earth. 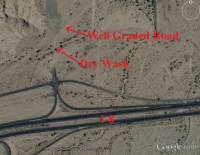 Needing to locate a place to boondock between Tucson, AZ and Salton City, CA last fall, I went to Google Earth to see what options were available in the desert east of Yuma. After a little searching, I found a nice spot to the east of the Mohawk Mountains just off of I-8. It showed what appeared to be a well graded dirt road departing the freeway interchange leading into the desert. Street view showed the area vegetated with mesquite trees and a great view of the rugged Mohawk Mountains. I recorded the coordinates that would lead us to our desert oasis.

Upon exiting the freeway days later I found the dirt road was well graded, but not well traveled. It seems a large volume of water had rushed down the dry wash in recent history taking the section of road that crossed the dry wash with it. The washout was either not discernible on Google Earth or occurred since the last photos were posted. Disappointed to be cut off from our selected desert oasis, we moved on down the road to a backup site. Yes, we could have stayed between the freeway and the end of the road at the dry wash, but if I had wanted to deal with the freeway noise, I would have just stayed in one of the many RV parks along the freeway in Yuma! For me boondocking is all about the solitude.

Arriving to the unexpected, just another adventure in RVing!