You are here: Home / Blog / Adventures in RVing: RV Dryer
This post may contain affiliate links or mention our own products, please check out our disclosure policy here.

by Dave Helgeson
September 9, 2014Filed under: 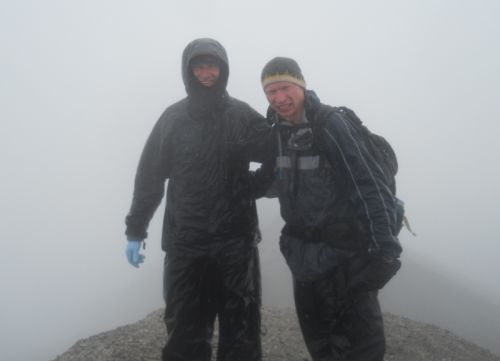 Climbing permits for Mt. St. Helens go “on sale” each February and quickly sell out. Therefore, when one of my adventurous RV friends was able to secure permits for his family and mine for the Saturday of Labor Day weekend, it was engraved on my calendar with permanent ink.

Those of you that live in the Pacific Northwest know we have been enjoying an awesome summer, above average temperatures and nearly endless sunshine perfect for exploring the Cascade Mountains. However, as the Labor Day weekend approached, my heart sunk as the weather service predicted a chance of rain. Hoping for the best I tuned into Northwest Cable News to watch the Portland, Oregon weather forecast as Rose City is the closest city to the mountain offering TV weather forecasts. The weatherman, who will stay anonymous, stated “Saturday would offer the chance of an occasional passing shower, would not be a rain out and not to let the forecast change your plans”

While not ideal, I could deal with a passing shower or two, so off we went with the RV to our base camp near the Mt. St Helens climbing trailhead. 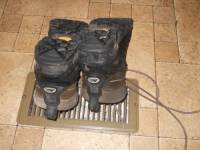 Saturday we awoke to a light drizzle, not unusual with the infamous Pacific Northwest marine layer. I thought that by the time we start climbing it will either be burning off or we will climb above it as it typically doesn’t exceed 4,000 – 5,000 ft in elevation. Unfortunately, I was wrong in both cases. Not only was I wrong, but the unnamed weather forecaster in Portland was too. It dumped sideways rain for most of the day. While we did summit the mountain, we were soaked!

However, not only had we planned on climbing Mt. St. Helens, but we had planned to spend the following day exploring other areas around the mountain. Since none of us had anticipated being drenched to the skin, none of us had thought about bringing spare gear, especially boots! Therefore, upon return to the RVs, the boots were rinsed off, placed inverted over the heat ducts, windows opened wide and furnaces turned up high.

Using your RV as a boot dryer, just another adventure in RVing!