You are here: Home / Blog / Adventures in RVing: Wrong Turn!
This post may contain affiliate links or mention our own products, please check out our disclosure policy here.

by Dave Helgeson
September 30, 2014Filed under: 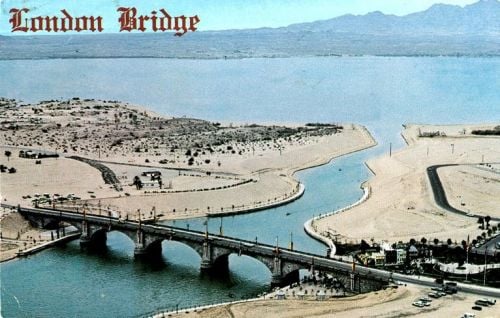 If you have followed this blog for long you know I regularly share RV adventures my wife and I have experienced while enjoying the RV lifestyle. This week I would like to share an adventure in RVing that happened many years ago as related by a 96 year old friend before it is lost to time

October 10, 1971: Clyde Miller and his wife arrive in Havasu City, Arizona towing a travel trailer. Being their first visit and long before onboard navigation they weren’t quite sure on where to find parking for their RV while they visited town. Spying a street without any vehicles and open curbs they turned onto it hoping to find a place to park. Unfortunately, temporary “No Parking” signs had been placed along the edge of the road preventing anyone from pulling off. As they traveled along not only were there more no parking signs along the way but the sidewalks were lined with people much like they would line a road waiting for a parade. As he crossed a bridge and descended the other side receiving cheers from the crowd lining the sidewalk, he realized his mistake. He had just crossed the famed London Bridge moments before it was to be crossed by dignitaries and dedicated.

Keep in mind: To celebrate the English heritage of the bridge, it opened with pomp and circumstance fit for a queen. I can just picture a square, early 1970’s travel trailer crossing the very decorated bridge.

Afterwards, they stopped to eat at a local Havasu City restaurant. As people entered and spotted Clyde and his wife seated at a booth they pointed, snickered and smiled at the guy who made a wrong turn and opened the bridge with a RV.  The owner of the restaurant even covered the cost of their meal as he felt their presence at his establishment attracted additional diners.

Not wanting to attract any more attention to themselves, they decided to head down the road rather than finding a RV park in town that evening.

Being the first RV over Havasu City’s London Bridge, a pretty awesome adventure in RVing!