You are here: Home / Blog / Camping in the Spring Mountain Mining District in Idaho
This post may contain affiliate links or mention our own products, please check out our disclosure policy here. 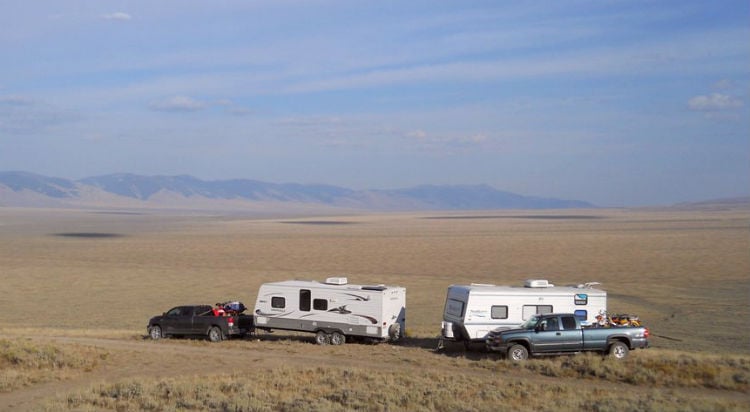 Always have a couple of back up campsites on hand.

Those of you that have been following this blog over the past eight years know that ghost towns and old mining camps rate high on my list of places to explore. While researching for places to visit in Idaho with some RVing friends, I came across the Spring Mountain mining district and the ghost town of Hahn.

Obviously, RV parks were not available in the area so a boondocking site would have to be found. Zooming in on an the area via Google Earth showed several RVs camped near the base of Spring Mountain. Looking at the date, the image was captured September 9, 2014, indicating it was Labor Day Weekend. My research revealed that Spring Mountain was also a popular area for ATV use. I assumed the camped RVs were enjoying the weekend and doing a little off-roading.

My thinking was if we arrived on a weekday, we would have our choice of boondock sites. The number of RVs in the photo also led me to believe that the road conditions were suitable with easy access. Nobody would tow their RV miles over a rough road just for a weekend of fun.

My assumptions, however, proved wrong. We turned off Idaho State Hwy 28 in late August and saw two travel trailers in the distance. They were atop the old smelter site at Hahn where I was planning on camping.

As always, I had a couple of back up campsites flagged on my map. We proceeded to an alternate site on what was a very rough road. How had I miscalculated so badly on someone being camped on a weekday and the condition of the road? After setting up camp and visiting with our ATVless neighbor I had my answer. They were archery antelope hunters!

In my home state of Washington, you don’t have to worry about competing with big game hunters for a camp space until October. In Utah, September is typically the time RVs show up in the national forests to set up hunting camps. I never imagined we would have to compete with hunters for a place in the boondocks before Labor Day. 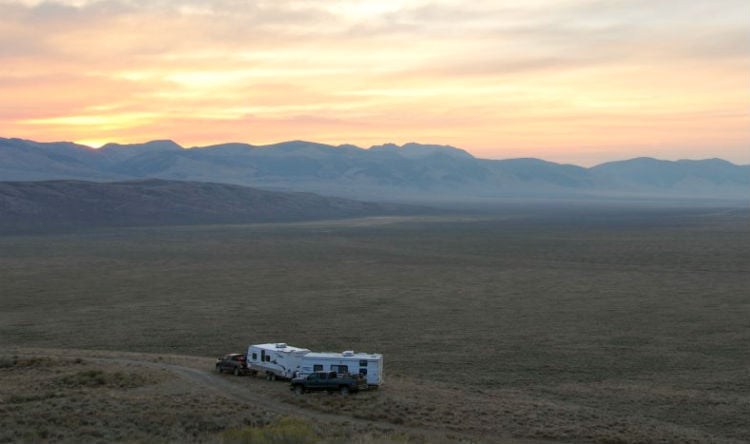 Our campsite in Hahn, Idaho.

Turns out archery season for antelope opens in mid August. When I learned this and after reviewing Google Earth again, I noticed there we no ATVs parked alongside the RVs in the photos. It now made sense that the RVs in the Google Earth photo were week-long (or longer) hunting camps and not weekend warrior camps.

Wrong assumptions and competing with hunters for campsites prior to Labor Day is just another adventure in RVing! If anyone knows of a comprehensive website that lists hunting seasons for the western states I would love to know about it.