You are here: Home / Columns / Tech Tips / CO Wakeup Call
This post may contain affiliate links or mention our own products, please check out our disclosure policy here. 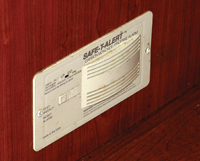 The mind is weak at 4 in the morning. It’s difficult to get a clear thought through, especially if you’ve been sound asleep and suddenly rung back to consciousness. But that’s what happened to us the other morning. A sound sleep was interrupted by an insistent, piercing, beeping noise. Both of us jerked straight up off the pillows. Some kind of alarm—outside the bedroom.

Being the male of the species, I was quickly nominated to go forth and determine the cause for the alert. As I’ve said, 4 a.m. in the darkness isn’t a good time for clear thinking, but it didn’t take long to find the source of the disturbing noise. Down at floor level in the edge of the kitchen, a little brown alarm box was screaming its fool head off. A light was blinking, and down on hands and knees, I tried to sort out the meaning of the light. I could see the light, but the print on the alarm box was too small. Back on my feet, I stumbled around, found a magnifying glass, and read the words that chill: CARBON MONOXIDE.

In retrospect, the proper response would have been to grab everyone in the house, toss them out the door, and call 9-1-1. But 4 a.m. thinking doesn’t always manifest itself in wisdom. I was awake enough by then to try and rattle off a few points of logic. Carbon monoxide will kill you, yes; it also gives off certain symptoms. Was I having any of the symptoms? Was this, perhaps, some sort of false alarm? By this time, I had gotten smart enough to open the outside door to start ventilating the house. I also trotted out to the RV and grabbed the carbon monoxide (CO) detector from the trailer. I wanted a second opinion.

It didn’t take long for that opinion to be rendered. My RV detector has a digital readout, and it soon indicated we had in the neighborhood of 70 parts per million of the nasty gas in the house air. Not enough to create immediate harm, but enough to cause us to completely ventilate the house, and work out where the problem was coming from. In the end, we found that a maintenance issue with a pilot light had to be addressed. But the whole thing gave us pause—how many RVers are really conversant with their CO detectors?

Statistical Tragedies
Carbon monoxide is a colorless, odorless, tasteless, and often deadly gas, the byproduct of incomplete combustion. The combustion source in an RV could be an improperly operating furnace, water heater, oven, generator, or any other device that burns fossil fuels. Small amounts of CO can make you sick—in fact it’s the leading cause of accidental poisoning in the U.S., with almost 10,000 cases heading into ERs every year. Larger amounts can make you dead: roughly 200 Americans a year join that statistical tragedy.

The symptoms of CO poisoning include headaches, nausea, dizziness, fatigue, shortness of breath and two real bad ones: unconsciousness and death. Carbon monoxide is a tricky thing: A little bit of CO over a long time can harm you, or a lot over a short period of time can do the same. Since there are plenty of devices in an RV that could produce carbon monoxide, it’s good for RVers to know the symptoms of CO poisoning. But it’s much better to have a CO detector warn you before you get symptoms.

Replacing Detectors
All new RVs come from the plant with a CO detector, but hang on. These devices have a limited shelf life. After five years from manufacture, your detector needs to be replaced. The hard part is that CO detectors for RVs have to meet special requirements—after all they are exposed to a wide range of temperature conditions and get knocked about with road bumps. Result: Like a lot of things in RVs, prices for CO detectors for your rig are typically more costly than the ones off the shelf at Homer D. Poe’s.

If you’re replacing an older, out-of-date detector that was installed by the manufacturer, replacement should be fairly easy. Simply dismount the old detector, observe wiring polarity, and reinstall the new detector following the instructions that come with it. Many OEM detectors are “hard wired” into the RV 12-volt system. However, before you go shopping for the new detector, make sure that it is rig-powered. If you buy a new detector that “looks” for 12-volt RV power and your old one was battery powered, you’ll be up to your neck with a wiring issue.

If your new detector wants 12-volt rig power and there are no handy 12-volt wire stubs, you’ll have to locate a source of 12-volt power near your installation area and run the wires out to it. MAKE SURE the wires are not switched, that is, you can’t accidentally shut off the power to the wires you tap into. Lighting circuits are a good bet, but they should not be switch controlled.

Where should CO detectors be located? CO has a specific gravity very close to that of air; when a heating appliance kicks out heat, it will tend to lift any CO present. You’d think putting the detector above floor level would be the idea, but it turns out each manufacturer has its own slant on things, so follow instructions included with each unit. You don’t want to install one near a gas appliance that may produce a small amount of CO on startup, nor too close to kitchen cooking appliances. Still, it’s important to have them close to sleeping areas so you’ll be sure—like us—to hear them if they sound in the middle of the night.