You are here: Home / Top Stories / Exploring Texas Hill Country
This post may contain affiliate links or mention our own products, please check out our disclosure policy here. 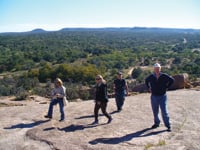 Texas is special. If you don’t believe this, just ask one of its residents, especially someone born and raised there. The Lone Star State offers a rich history, gulf beaches, rugged mountains, historic forts, great Tex-Mex food, straight roads, and some of the most unusual individuals you will ever run across. It’s no wonder television producers chose Texas as the state in which to showcase a group of eccentric characters, including an unscrupulous oil tycoon.

The state is also large. Really large! The borders stretch forever in all directions as a drive from Beaumont to El Paso proves ever so well. Following that seemingly endless trip, try Amarillo to Brownsville and get an even better feel for the distances involved in traveling through this state.

Over the years we have explored much of the Lone Star State including a number of visits to one of our very favorite places, Big Bend National Park. Another interesting and scenic area in the western part of the state encompasses the Davis Mountains north of the town of Alpine. Nearby the mysterious Marfa lights sometimes hover over the night sky.  Padre Island National Seashore on the Gulf Coast near Corpus Christi is another great place to visit. 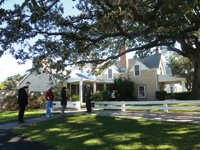 While Texas is home to all these wonderful places, our favorite region of the state is its famed Hill Country that former President Lyndon Johnson loved so much. This region in the east-central portion of Texas comprises approximately 15,000 square miles and covers most of 19 counties. San Antonio and Austin, two of the state’s largest cities sit on the region’s extremities, but small towns such as Kerrville, Johnson City, Dripping Springs, Comfort and Blanco are its soul.

One of these smaller towns, Fredericksburg, is considered by many as the heart of the Hill Country. It is also our favorite Texas town. Fredericksburg is home to an outstanding military museum, a downtown historic district that includes a collection of 19th century structures, and a series of quaint shops bordering Main Street. Fredericksburg reeks of Texas, the real Texas. Gillespie County in which Fredericksburg is located is peach country, wine country and cattle country.

Fredericksburg’s German Heritage
The Hill Country was settled in the mid-1800s by German immigrants who wished to escape the political and economic turmoil of their home country. Promised transportation and land by a German society that eventually went bankrupt, the settlers faced a number of hardships, including disease and conflicts with the Comanche.

Soon after the 1845 establishment of the first settlement in New Braunfels, the group’s leader commenced a search for a second site. This resulted in the founding of Fredericksburg, named for Prince Frederick of Prussia. The town’s population reached 966 within a year, and 15 retail establishments opened. That same year saw the group’s leader successfully negotiate a treaty with the Comanche.

With Fredericksburg’s German settlers came their food, music, social groups, and, of course, their beer. Particularly interesting are Sunday houses that German farmers and ranchers living in the outlying areas maintained in town for the weekends when they would shop, visit and attend church. Many of the German traits and activities have been kept alive by the settlers’ descendants who continue living in the Hill Country of Texas.

Fredericksburg Today
For a modest size town of 12,000 residents, Fredericksburg offers a surprising number of activities and interesting places for visitors to explore. Main Street is lined with locally owned restaurants and shops offering everything from western wear to hand-dipped chocolates. Want a glass of local craft beer and a basket of breaded onion rings?  How about a Rueben sandwich followed by a dish of homemade ice cream? No problem except choosing among the half-dozen local brews (including Not So Dumb Blonde Ale) and about 40 varieties of homemade ice cream.

The town’s major attraction is the National Museum of the Pacific War that honors persons who served in the Pacific during World War II, especially native son Admiral Chester Nimitz, who was appointed commander-in-chief of the Pacific Fleet.  The museum complex includes the George H.W. Bush Gallery that utilizes photos, exhibits, multimedia presentations, and interactive displays to transport visitors through the entirety of the Pacific conflict from Pearl Harbor to the signing of the Japanese surrender aboard the U.S.S Missouri. 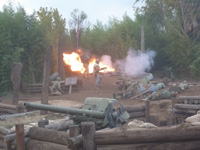 The Admiral Nimitz Museum, located in historic Nimitz Hotel where Robert E. Lee was once a guest, tells the story of the Fredericksburg native. The museum complex includes a Japanese peace garden, a Plaza of Presidents that pays tribute to the 10 American presidents who served in WWII, and a combat zone where living history demonstrations and reenactments are presented.

The Pioneer Museum complex on Main Street includes 11 historic buildings on 3.5 acres. Structures include a schoolhouse, Sunday house, bathhouse, smokehouse, log cabin, barn and several homes representative of Fredericksburg from the mid-1800s to the 1920s.  Several hundred thousand artifacts date back to when Fredericksburg was founded. Themed tours including one featuring German food are offered periodically.

In the middle of downtown, the community’s best known structure, the Vereins Kirche, was constructed in 1935 to replace a similar 1847 building used by settlers as a church, fort, storehouse and meeting hall. The building now houses historical exhibits relating to Fredericksburg and Gillespie County. It includes a small store where books, postcards and souvenirs are sold.

Nearby Attractions
Sixteen miles east of Fredericksburg, Lyndon B. Johnson National Historical Park and adjacent Lyndon B. Johnson State Park and Historic Site preserve and interpret the ranch home and other properties associated with our 36th president. A visit to the ranch will make it clear why, following his presidency, LBJ and his wife chose to continue living in the Hill Country. The national historical park includes LBJ’s ranch home and show barn.  Guided tours of the home are offered. LBJ’s reconstructed birthplace home, his first school, and his grandfather’s home are also here. The family cemetery where LBJ and wife, Lady Bird, are buried is alongside the road leading to the ranch home. Tours of the ranch begin across the river in the state park that also includes a living history farm.  LBJ’s Johnson City boyhood home is in a separate unit of the national historical park.  Plan a full day to explore these interesting sites.

Eighteen miles north of Fredericksburg on RR 985, Enchanted Rock State Natural Area protects some of the most beautiful terrain in Texas, highlighted by a massive pink-colored granite dome. Visitors can hike the area’s eight miles of trails, including a rewarding climb to the summit that offers outstanding views of the Hill Country.  Technical and rock climbing opportunities are also available.

One of the area’s biggest draws is “Trade Days” on the weekend of the third Saturday of each month. Located in a group of former chicken barns, the marketplace has more than 350 vendors, who offer antiques, furniture, clothing, jewelry, food and more.  The market is just off U.S. Highway 290 seven miles east of town.

David and Kay Scott are authors of The Complete Guide to the National Park Lodges (Globe Pequot).  They reside in Valdosta, Georgia. They can be found online at mypages.valdosta.edu/dlscott/Scott.html.

RVing in the Hill Country:
The Fredericksburg area is home to several attractive RV parks that offer plenty of spots for overnight and long-term stays. We were told by two Fredericksburg RV park managers that their operations have increasingly become destination parks in which RVers stay for several months, especially during winter.  Thus, it is wise to reserve a site, especially if you plan a lengthy stay.

Lady Bird Johnson RV Park (fbgtx.org; 830-997-4202), three miles south of town is part of a 150-acre municipal park that offers hiking trails, a swimming pool, tennis courts, pavilions with barbecue pits, and softball fields. Rates are $30 nightly, $175 weekly, and $395 monthly. The latter is available only from September through March. Full hookups and cable TV are included while Wi-Fi is available for an extra fee.

Fredericksburg KOA (koa.com/campgrounds/fredericksburg; 800-562-0796), five miles east of town on U.S. 290, offers both back-in and pull-through sites that can handle rigs of up to 100 feet in length. Cable TV, Wi-Fi, and a pool, along with live weekend music, are offered. Rates are in the range of $50 to $55 per night depending on the season.