You are here: Home / Blog / First Glance: Brought Back to Life
This post may contain affiliate links or mention our own products, please check out our disclosure policy here.

One man’s junk is another man’s treasure, as the saying goes, and that’s certainly true of old travel trailers. When I see one rotting away in somebody’s yard, I wonder why they don’t haul it away to the junkyard. But then I see what can be done with some of these old trailers, and I realize that maybe they shouldn’t be hasty. Some can be turned into treasures.

Richard Nash, who has spent much of his life building expensive custom homes for clients in places like Aspen, Colorado, is now restoring vintage travel trailers, and, he says he finds the work more rewarding than constructing houses.

Nash said people tell him. “You’re saving a piece of Americana. That’s really cool; thanks for doing it.”

Nash and his wife, Vicky, own Retro Trailer Design in Glenwood Springs, Colorado. It was Vicky who got them into the trailer restoration business. She read an article in Country Living about women who vacation in antique trailers painted with murals, and decided they should add a classic trailer to her husband’s classic car collection.

They acquired and fixed up a damaged 1970 Shasta trailer, and that experience went so well that they took on the even bigger project of a dilapidated 1962 Shasta that was ready for the junk heap. They paid $100 for the wreck and poured in more than $10,000 worth of materials and more than 100 hours of labor to restore it to its 1960s glory. For travel, they pair it with a 1961 Ford Galaxie Sunliner convertible, and wherever they go camping, they are a center of attention.  That interest led the Nashes to enter the trailer restoration business.

Clever Design
The Shastas of the 1950s and 1960s were popular for their canned ham design. They had the shape of a canned ham, a distinctive Z pattern on the siding and the added flourish of silver wings as an emblem at the rear.

The 1962 Shasta owned by the Nashes is 16 feet long, and has a bed, a stove, a refrigerator, a sink, cold running water and a surprising amount of storage space. It doesn’t have a bathroom, but it is so light that it is easy to tow and has everything you need to eat, sleep and relax. 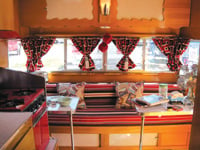 The Shasta was in such poor shape to begin with that it had to be stripped to its frame.  The Nashes used the original parts as a template to rebuild the trailer, and they salvaged and reused the original trim, hardware and glass. New aluminum for the roof and side panels and ash wood for the interior brought the trailer back to life.

Richard did the reconstruction work, and Vicky contributed her design talents, adopting a soda fountain theme for the interior that includes a black and white checkerboard floor and Formica countertops and tables.

Vicky, who provides public relations services for the travel industry, wrote an article about a vacation trip in their classic car and trailer for the AAA Colorado EnCompass magazine. In addition, their trailer restoration business was featured in the Costco Connection magazine. Vicky said the publicity brought responses from all over the country, with some people interested in obtaining a restored trailer, others offering to sell or give away run-down trailers, and some just letting them know they are doing valuable work.

Saving the Classics
Of course, not every old trailer is worth saving. There were hundreds of trailer manufacturers in business years ago, but it is the Shastas, the Airstreams and some other brands that endure as classics because they were built well or designed creatively. In the view of the Nashes, trailers lost their flair and most designs became boring in the 1970s, so they are concentrating on restoring pre-1970s models.

They have acquired a number of old trailers, including Shastas and a 1956 Rainbow and 1958 Santa Fe, that they will restore once buyers come forward and express interest.

Besides, says Richard, some new trailers don’t have much character, are flimsy and won’t be worth much in a few years. He regards the trailers he is restoring as “rolling art” that “we’re trying to make last another 50 years.” (If you are interested in more information, the company website is retrotrailerdesign.com.)

Next month, we’ll tell you about another Shasta trailer restoration project, a do-it-yourself effort undertaken by a woman who uses the trailer to teach children about the outdoors.