You are here: Home / Top Stories / Fort Robinson: A Western Treasure
This post may contain affiliate links or mention our own products, please check out our disclosure policy here.

Tucked into Nebraska’s far northwest corner is an unusual state park where you can immerse yourself in western history, ride horses, paddle a kayak, hike, swim in an Olympic-size pool, enjoy an open-air Jeep or stagecoach ride, visit a history center, take in a live theater production and ride in a horse-drawn wagon. You can stay overnight or longer in a campground or sleep in a historic cabin or lodge at what was once a U.S. Army post. All this and more in an environment that retains a true flavor of the Old West.

We unexpectedly came across Fort Robinson State Park many years ago while driving south through western South Dakota to Scotts Bluff, Nebraska. At the time we were nearing the end of a long trip to the West Coast and in a hurry to return to our home in Georgia. Thus, we failed to devote much time to an exploration of the park other than to drive through while promising ourselves to return some day. The failure to stay longer was our loss. After a long absence from this part of Nebraska, a recent visit to the state allowed time to set aside two days and take in one of the most unusual and interesting state parks in America. 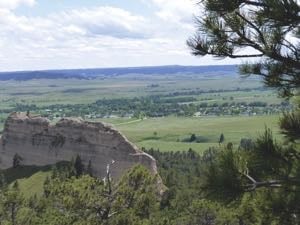 Fort Robinson was established in 1874 as a military camp to protect an Indian agency created by the Bureau of Indian Affairs to serve Native Americans. Before being phased out as a military fort in 1948, it served numerous functions and was home to several well-known individuals, including Lakota warrior Crazy Horse, U.S. Army physician Walter Reed, and General Arthur McArthur, father of General Douglas McArthur.

The facility was one of several western military posts established to protect Indian agencies. In this instance, it was the Red Cloud Agency established in 1873 for Chief Red Cloud and his band of Ogalala that had moved here from near Fort Laramie. Establishment of the camp was occasioned when a band of Agency Indians in combination with outsiders began harassing Agency employees and local cowboys.

The camp is perhaps best known as the location where in 1877 Crazy Horse and his band of Lakota Sioux surrendered and where that same year the Lakota leader was fatally wounded during a scuffle with a soldier. The camp was renamed Fort Robinson in 1878 in the midst of what became known as the Sioux Wars that lasted for over a decade. In 1879, Northern Cheyenne Chief Dull Knife led an outbreak from the Agency and soldiers from Fort Robinson were sent to hunt the group down. This resulted in the killing of Cheyenne women and children in another sad episode during the settling of the American West.

The camp’s soldiers provided protection for the region’s residents and travelers on the Sidney-Deadwood Trail that connected gold fields in the Black Hills with the major supply point in Sidney. In the late 1880s, arrival of the railroad allowed quick transport of soldiers to trouble spots, resulting in expansion of the fort. Around this same time the famed all-black unit known as “Buffalo Soldiers” of the Ninth Cavalry arrived.

Once a military barracks, this is now a park lodge.
Photo credit: David & Kay Scott

While its early history, buildings and scenic location create much of the park’s character and charm, changes that took place during the early 20th century are what attract many of today’s visitors. This is especially true of the period following World War I when Fort Robinson became the nation’s largest quartermaster remount depot for breeding and training horses and mules for the U.S. Army. While it also served four years as a K-9 center where 14,000 war dogs were trained, it is the horse facilities that interest many visitors. For several decades the fort’s personnel cared for and trained horses that were issued to U.S. Army mounted units. The fort also supplied stallions for breeding purposes to civilian agents. Remounting was discontinued in 1943 and at World War II’s end, the remaining horses were auctioned.

The military reservation served as one of more than 100 prisoner of war camps in the United States. The camp was established between the post and the nearby town of Crawford in 1943 and initially housed 600 German POWs from Rommel’s Afrika Korps. Although the war ended in mid-1945, many of the POWs did not depart for another year.

A reconstruction shows how the barracks once looked.
Photo credit: David & Kay Scott

With an isolated location and lack of a mission, Fort Robinson was declared surplus in 1948 and transferred to the U.S. Department of Agriculture, which used it as a beef cattle research station. This lasted for 22 years before the facility transitioned to a USA Soil Conservation Training Center. A portion of the old post had been acquired in 1955 by the state of Nebraska for the purpose of creating a state park. The remaining acreage was transferred to the state when the beef research operation closed.

Fort Robinson is like a Disneyland of the Old West, only it’s the real thing rather than a sanitized, make-believe version. And rather than paying $105 per person for a one-day ticket to the Magic Kingdom, entrance to Fort Robinson State park requires only a $5 entrance permit for a vehicle full of people. Ante up $25 and you can buy an annual pass that covers entrance to any of Nebraska’s dozens of state parks, recreation areas and historical parks. What a deal! Another benefit is that visitors find the 22,000 acres of Fort Robinson much less crowded than most commercial theme parks.

Although several of the park’s buildings have been reconstructed, most are original. Superintendent Mark Morava indicated during a tour of the park that 65 buildings in the fort average over 100 years of age. Visitors can explore more than a dozen historic structures including the 1906 blacksmith shop, a restored 1909 veterinary hospital, a 1900 wheelwright shop (where wagon wheels were repaired), the 1895 granary building, the 1887 adobe officers’ quarters, and a 1906 quartermaster shop. The 1905 post headquarters building houses a museum with exhibits that chronicle the post’s history from its origin through the housing of prisoners of war.

Reconstructed buildings include the post guardhouse where Crazy Horse was killed, the barracks where the imprisoned Cheyenne broke out, and the post adjutant’s office. While a number of buildings were demolished following the departure of the military, enough remain that the park retains the image of a western military post.

Exploring the fort’s historic buildings is something that every visitor will want to do, but it is the range of activities available that results in many families spending several days in the park. Stagecoach and Jeep rides are offered daily and mountain bikes are available for rent. Kayak and tube rides are also offered. Steak cookouts take place each evening during summer, and special hayrack breakfasts are offered four mornings a week. An indoor pool is open during summer afternoons and evenings.

The park is particularly popular with horse lovers. Visitors can bring their own horses and house them in the park’s stables while camping or renting a cabin or room in the lodge. Nearly 22,000 acres are available for riding horses. The park also offers trail rides, pony rides, stagecoach rides, and a horse-drawn wagon tour of the grounds. Rodeo events take place each Thursday evening.

Park lodging ranges from a room in the former enlisted men’s barracks to cabins that can sleep up to 20 individuals. The 22 lodge rooms each have a private bathroom with bedding for one queen or two twin beds. Rates are modest at $65 to $70 per night. Cabins (houses really) range from $150 per night for a unit that sleeps six to $850 nightly for a large group facility that can accommodate up to 60 people and includes a large group kitchen.

Four camping areas range from a primitive area for tenters or RVers not wanting hookups ($13 per night) to Red Cloud Campground with 32 full hookup sites ($26 per night). Soldier Creek Campground has 72 sites with 30- to 50-amp electrical sites ($20 per night) but no water hookups. A modern shower house and water hydrants are available. The fourth campground, Mare Barn, is near the stables and designed for visitors bringing their own horses. Stalls rent for $13 per night. This campground has 20 electric sites and four full-hookup sites. Campgrounds can handle rigs of up to 66 feet, although a limited number of pull-through sites are available. Approximately half the park’s campsites are subject to reservation while the remainder are first-come, first-serve.

David and Kay Scott are authors of “Complete Guide to the National Park Lodges” (Globe Pequot). They can be reached at valdosta.edu/~dlscott/Scott

Getting There: Fort Robinson State Park is located on U.S. Highway 20 in the extreme northwestern corner of Nebraska, just west of the town of Crawford.
Lodging: The fort offers rooms in the former enlisted men’s barracks and a series of cabins that can sleep from 6 to 60 people. For reservations call (308) 665-2900. Campground reservations may be made online at reserveamerica.com.
Food: A restaurant in the main lodge building serves breakfast, lunch and dinner during the summer season. The restaurant offers catering for group functions from mid-April through mid-November.
Additional Information: Call (308) 665-2900, email ngpc.Fort.Robinson@nebraska.gov, or visit outdoornebraska.ne.gov/parks/guides/parksearch/showpark.asp?Area_No=77.