You are here: Home / Blog / Ghost Towns: Coolidge, Montana and Upper Camp
This post may contain affiliate links or mention our own products, please check out our disclosure policy here. 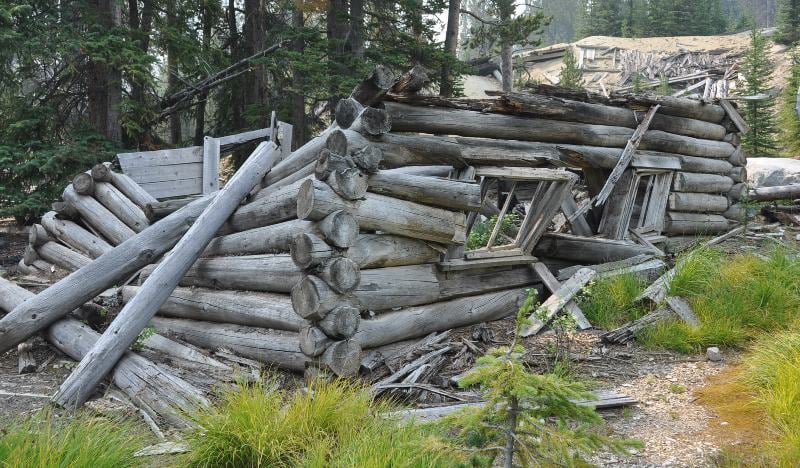 Ruins of an upper camp Cabin

Last week, we visited the mining ghost town of Coolidge, Montana. While the town site contained the typical buildings of a frontier mining camp along with the mill to process the ore, most of the ore processed by the mill came from the Idanha tunnel, located high above town located at what was known as the upper camp. The only developed transportation link between the upper camp and Coolidge (lower camp) was an inclined cable rail line straight up the mountain. Today the rails are gone and from the top all you can make out is the old clear-cut through the trees. In fact, if you stand at the edge of the mountain where the ore was loaded into the rail cars, you are unable to see the rail terminus or town far below.

Due to this geographical break between Coolidge and upper camp, you will want to treat the two as individual destinations when you visit.

As mentioned above, most of the silver ore processed by the mill came from the Idanha tunnel at the 300-foot level of the mine (levels were numbered from top to bottom), which was located at the upper camp 800 vertical feet above the mill. Ore from the Idanha could be lowered internally through the mine via a raise to the lower tunnel at the 1000-foot level where electric locomotives hauled ore cars a quarter mile to the mill. Ore from other shafts and adits at the upper camp was brought to the mill via a rail cable car system that ran steeply down the mountain side from an ore bin at the upper camp to an ore bin located just north of the lower mine tunnel portal in the town of Coolidge. The rail cable car employed a gravity system where loaded cars going down the mountain pulled the empty cars back to the top. The rail system had an unusual three rail track design so the rail cars could pass each other. From the ore bin at the bottom, ore was transferred to the lower electric locomotive, which hauled it to the mill. 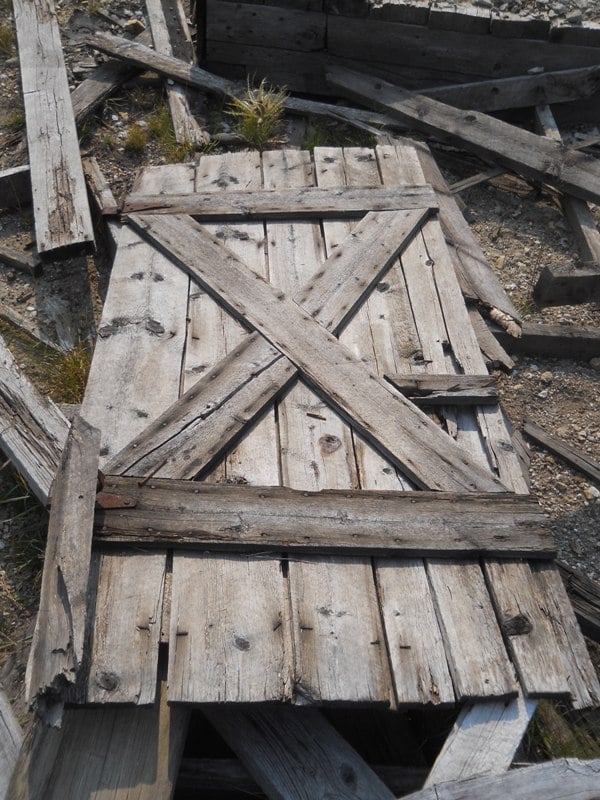 A remaining door at upper camp.

Due to the separation from the town of Coolidge below, upper camp emerged to support the mining and miners of the upper workings. Structures included multiple houses, a large corral, black smith shop, assay shops, cook house, carpenter shop, mine hoist house, ore sorting building, bunk houses for the miners and a large boarding house. Heavy snows proved difficult for moving ore during the winter months and production would often suffer. As a result, snow sheds were built over the rail lines emerging from the upper mines to keep the tracks clear. As of the summer of 2014 the timbers of the snow sheds were still standing along with ruins of most of the structures mentioned.

Next week we will wrap up our Montana ghost town adventures by looking at where to camp when visiting upper camp and other nearby areas worth a visit.

The road is suitable for most two-wheel-drive passenger vehicles with average ground clearance.