You are here: Home / Top Stories / Going for the Gold
This post may contain affiliate links or mention our own products, please check out our disclosure policy here. 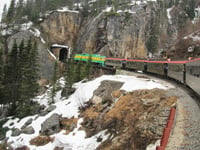 Ho! for the Klondike. Stick to the trail and mush on!” was the mantra of more than 100,000 fortune-seekers who used Skagway, Alaska, as their “jumping off point” to the gold fields 600 miles away. Like those stampeders of 1898, most modern day visitors still arrive in Skagway by ship, but unlike those eager gold prospectors, no one is in a big hurry to move on. Skagway is an interesting destination itself, offering plenty to see and do. There are four campgrounds in and around town if you bring your RV aboard the Alaska Marine Highway System. The ferries can accommodate motorhomes of all sizes.

Back-dropped by snow-capped mountains, Skagway’s gold rush era architecture and history are well preserved. Six blocks of downtown have been designated as the Klondike Gold Rush National Historic District and are managed by the National Park Service, so there’s a good bit of yesteryear mixed in with modern gift shops and museums. Get your bearings at the Klondike Gold Rush Visitor Center, housed in the historic White Pass and Yukon Route Railroad Depot at Second and Broadway. Watch the 30-minute film, “Gold Fever: Race to the Klondike,” in the auditorium, then take a look at the exhibits and artifacts. Join a free ranger-led walking tour of the historic district, or pick up a self-guided walking map. It’s easy to explore on foot—just head down Broadway along the rough-hewn boardwalk.

A couple of blocks from the visitor center, at Third and Broadway, you’ll find the authentic Mascot Saloon—now a museum containing more interesting displays and dioramas. To learn about Skagway’s founder, visit the historic Moore House and Cabin at Fifth and Spring streets. The driftwood-encrusted building on Broadway bearing the letters AB for Arctic Brotherhood dates to 1899. It was the first social order established by gold miners, and is now the most-photographed place in town. It’s also impressive to note that a few businesses such as Kirmse’s Curios first opened over a century ago and are still thriving. 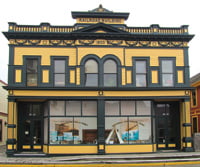 If you get thirsty, stop in for a sarsaparilla or other cold beverage at the lively Red Onion Saloon. It used to be a brothel, but now you’ll just find good, clean fun. Have a look at the museum on the top floor, or better yet, take a walking tour of the town with a “working girl” and learn about the ladies’ very important role in the Klondike Gold Rush, as well as hear a few ghost stories. You are certain to learn a thing or two from the likes of “Madame Lacy Knickers” or “Madame Ella Vagoodtime” or another talented actress turned tour guide!

For an amusing encounter with Skagway’s history, board a sunny yellow Skagway Street Car on Second Avenue. The authentic vehicles were created in 1923 for President Warren Harding’s visit to Skagway. Today, tourists hop aboard for a 90-minute narrated tour while a costumed guide brings Skagway’s wild and lawless past to life. The stories are amazing!

Gold Rush Begins
Although Skagway is central to the story of the Klondike Gold Rush, the gold frenzy began in Seattle when the SS Portland arrived from the Yukon Territory on July 17, 1897, with 68 rich miners and nearly two tons of gold on board. Excitement spread quicker than wildfire. Newspaper headlines screamed, “GOLD! STACKS OF YELLOW METAL IN THE KLONDIKE!”

Seattle launched an unprecedented public relations campaign to establish itself as the place to get the “ton of goods” (about 1,000 pounds of food and another 1,000 pounds of gear) required by the Canadian Mounties for admittance into the Klondike. It’s hard to imagine hauling 400 pounds of flour, 150 pounds of bacon, 125 pounds of beans, plus cookware, clothes, and tools, but it was actually a smart mandate for the long trail to the gold.  (You can learn the details at the Klondike Gold Rush National Historical Park in downtown Seattle.)

Wonder why so many men and women risked everything to travel to a place they had never seen? Most didn’t have anything to lose. The nation was in an economic crisis as banks, railroads and businesses failed. The discovery of Klondike gold actually brought hope. What these hopeful prospectors didn’t know, though, is that by they time they would finally reach the Klondike (most arrived two years after gold was first discovered), the richest land would already be claimed and worked out.

An American prospector, George Carmack, accompanied by his wife, nephew and brother-in-law, had made the discovery on a tributary of the Klondike River on August 16, 1896, when he noticed a metallic glitter while washing a dishpan in shallow water. The first claims were filed and before long, anyone lucky enough to be in the area followed suit. By November of that year, 338 claims had been recorded.

Routes to the Klondike Gold Fields 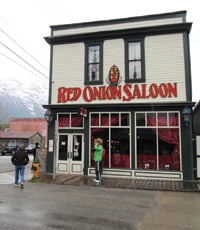 Determined gold seekers sailed by ship from Seattle through the Inside Passage and up the Lynn Canal to Dyea or Skagway, Alaska. From, there it was still a long way to the gold fields. Hiking options included the Chilkoot Trail from Dyea, or via the White Pass Trail out of Skagway. Skagway was a better, deeper port than Dyea, so it earned the reputation as the “Gateway to the Klondike.” Most stampeders “jumped off” here.

Roughly 30,000 indomitable prospectors chose to battle the 33-mile Chilkoot. The trail was rough and the weather was harsh. In early April 1898, a storm triggered an avalanche that killed 60 people. Many turned back, especially when faced at the end with the formidable frozen “Golden Staircase”—a climb of 1,000 feet in a quarter mile. To get their large load of gear up the ice stairway, prospectors had to go up and down it 20 or 30 times, which took about three months. The White Pass Trail from Skagway was less steep, but it took miners about a month to lug supplies the 45 miles up to the White Pass Summit. In some places, the path was only two feet wide and a 500-foot drop awaited any animal or miner who made a misstep.

Whether gold seekers trudged the Chilkoot or the White Pass Trail, both converged at Lake Bennett on the border between British Columbia and the Yukon. There, miners built boats as they waited for the ice to melt so they could navigate 550 miles down the Yukon River to the gold fields at Dawson City. In late May 1898, the North West Mounted Police counted over 7,000 boats, rafts, canoes, skiffs—anything that would float—ready to launch. Sadly, many inexperienced men didn’t make it to Dawson; they drowned in the river rapids. 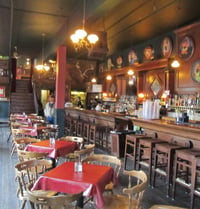 Gold prospectors arriving in Skagway without a “grubstake” (requisite ton of goods) or $500 to buy it could make $3 per day working for the White Pass & Yukon Railroad Company. The railroad, built under unimaginable weather conditions and requiring the muscle power of 35,000 workers, was intended to carry gold stampeders to the Yukon, but although the railroad was built in just 26 months, the Gold Rush was over by the time it was completed.

Alaska cruise ships and ferries bring far more tourist business to the historic White Pass Yukon Route today than the original gold rush ever did, but that’s OK because a ride on the Scenic Railway of the World from Skagway is unforgettable! The restored and replica passenger coaches are warm and comfortable. The route climbs nearly 3,000 feet to White Pass Summit in just 20 miles, and every mile is more scenic than the last. Rushing waterfalls, deep gorges, tunnels through solid granite, cliff-hugging turns, and high bridges flanked by forest and snowy mountains guarantee a grand adventure and great photos. Try to sit on the left side of the train when heading up to the summit. Going up takes a little longer than coming down, and the best scenery is on the left. Don’t worry, though, because it’s mandatory that passengers switch sides of the train for the return trip so that everyone gets a great view out the huge windows.

The three-hour White Pass Summit Excursion (the most popular trip for tourists, although the route goes all the way to Whitehorse, Yukon) is fully narrated. As the train passes particular sections of the route, you’ll hear interesting and often sad stories. Dead Horse Gulch at milepost 17.5 was aptly named because during the 1897-1898 winter, 3,000 pack animals died here—most were literally worked to death by gold-fever-crazed miners who had no regard for the animals in their haste to get to the gold fields.

Boom Town
Dawson City, located at the confluence of the Yukon and Klondike rivers, boomed with the discovery of nearby gold. And just like in Seattle or Skagway, merchants made a fortune. Want a fresh egg? You’ll need $5. Whiskey was $40 a gallon. By the time most stampeders reached Dawson City, nearly two years had passed since the local gold discovery. Without good land to work, some disillusioned fortune hunters simply sold their gear in exchange for steamboat fare home. Others heard about another gold discovery in Nome, Alaska, and went there. Determined miners not daunted by the slim pickings or strenuous work stayed in the Yukon.

The Klondike Gold Rush statistics are sad but true: it is estimated that of the 100,000 people who embarked for Dawson City, 40,000 reached it; 20,000 actually worked mining claims, but only 300 made more than $15,000 in gold (which made them millionaires back then). Of those 300 who struck it rich, only 50 kept their wealth for any length of time. George Carmack, whose discovery sparked this Gold Rush, did get rich and reportedly took a million dollars worth of gold out of his Klondike claims. Amounts vary by source, but the U.S. Mints in Seattle and San Francisco reported receiving about $48 million in Klondike gold between 1897 and 1900.

As you wander through Skagway and visit the sites, try and imagine it as a chaotic, unkempt tent city. Imagine the frenzied pace of the hopeful stampeders. The Klondike Gold Rush peaked and plummeted within just two short years, but changed history forever. As you stroll, look DOWN once in a while because maybe, just maybe, you’ll see a little leftover gold dust shimmering in the cracks of the plank sidewalk!

Denise Seith is a freelance travel writer and treasure hunter in Salem, Oregon. She and her husband, Larry, own GoldRushTradingPost.com, an online prospecting equipment and supply store.

IF YOU GO:
Klondike Gold Rush National Historical Park: The visitor center in Skagway is housed in the historic 1901 White Pass and Yukon Route Railroad Depot (nps.gov/klgo). The Seattle unit of the park is at 319 Second Avenue South. (nps.gov/klse).

Skagway Visitor Center is in the Arctic Brotherhood Building (Skagway.com).