You are here: Home / Blog / Great Escapes: Craigdarroch Castle
This post may contain affiliate links or mention our own products, please check out our disclosure policy here. 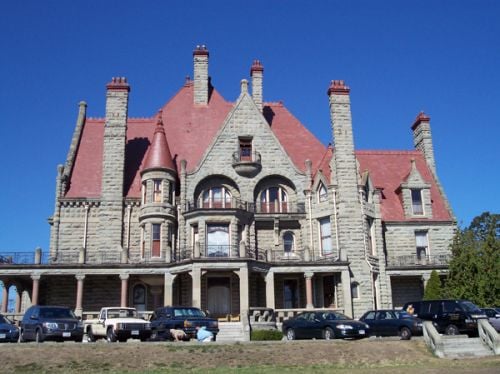 If you admire exquisite stained and leaded glass, intricate woodwork, and original Victorian-era furnishings, you’ll enjoy a tour of Craigdarroch Castle in Victoria, British Columbia, Canada. Craigdarroch is a Gaelic word that means “Rocky Oak Place.” This sandstone mansion was built between 1887-1890 for coal baron Robert Dunsmuir and his family. At the time of construction, the Castle had electricity, running water, four bathrooms, a telephone, central heat (hot water radiators) and a burglar alarm. Now, about 140,000 visitors each year take self-guided tours of its 39 rooms and climb up to the tower for expansive views of the city of Victoria, the Strait of Juan de Fuca, and the Olympic Mountains. There are quite a few stairs throughout the house and no elevator. This magnificent home on a hill has been restored to look like it would have 125 years ago.

Robert Dunsmuir was a Scottish immigrant and self-made multi-millionaire. In addition to mining coal, his fortunes were made in railroads and ships as well. Unfortunately, Mr. Dunsmuir died a few months before his extravagant home was completed, but his wife Joan, three unmarried daughters (there were 11 Dunsmuir children in all), and two orphaned grandchildren lived here until Joan’s death in 1908. Mr. Dunsmuir’s death also caused quite a riff between Joan and her two sons. Both James and Alex (then in their thirties) had worked in the family business all their lives and thought they should have inherited the 28-acre family estate and business holdings instead of their mother. 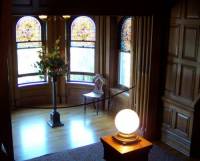 As you tour the house, notice all the amazing furniture, clothing, artifacts, and memorabilia in every nook and cranny. With over 26,000 square feet of interior space, you might expect a cold and impersonal feel. But the castle’s furnishings, stained glass windows, and exotic woodwork (walnut, jarra, rosewood, maple, holly, and oak) give it a warm, lived-in charm. Lavish, certainly, but comfortable, too. You can almost imagine yourself as a dinner guest here, or playing a game in the billiard room. Craigdarroch Castle also served as a military hospital beginning in 1919, and as Victoria College from 1921 to about 1946. A combination of friendly docents, old photos, signage, and an optional audio tour tell the full history of the castle and its inhabitants.