You are here: Home / Top Stories / A Food Truck RV – Toy Hauler Conversion For Charity
This post may contain affiliate links or mention our own products, please check out our disclosure policy here.

by Steve Fennell
October 19, 2016October 20, 2016Filed under:
Table of Contents show
How You Can Help People with Disabilities 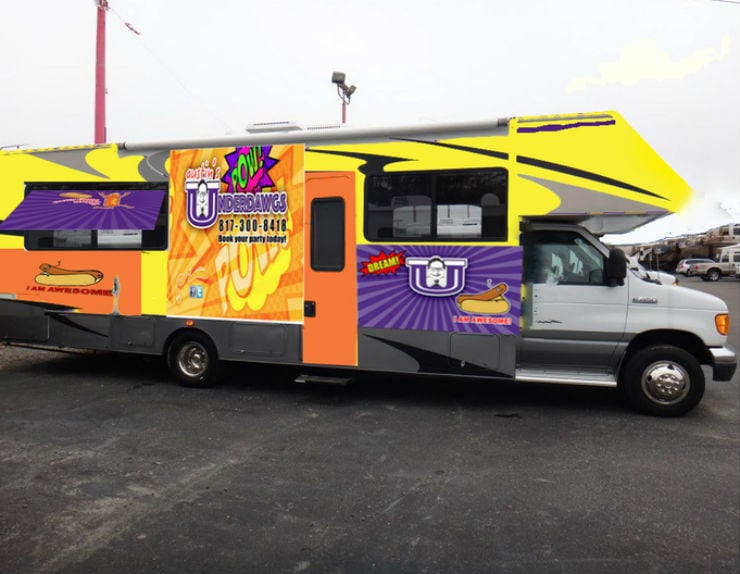 It’s always interesting to see how many trailers and RVs have been modified for creative RV businesses. The same principle has recently been realized by Jan Underwood and her disabled son, Austin, who also have a vision of raising proceeds through their mobile business for people with special disabilities across parts of the U.S. next summer.

Jan and Austin are co-owners of Austin’s Underdawgs, a mobile catering service in Fort Worth, Texas. They currently utilize a towable food-style trailer, but it`s their hopes to upgrade to a used Thor Motor Coach 29 H Class C Outlaw toy hauler. They are making efforts to achieve this by asking for donations in their fundraising campaign, Donations for Dawgs, to reach their goal of $75,000. The mother and son are also utilizing PieShell.com, a crowd-funding platform that serves the food and beverage industry, to boost their efforts.

Austin and his mother Jan.

Additionally, the Class C will be for their Underdawgs Tour 2017, a 2000-mile fund raising mission from New Mexico to Washington, D.C. in the summer of 2017. While traveling, they hope to raise $50,000 selling hot dogs at scheduled events with half of the proceeds supporting The Each and Everyone Foundation, which supports vocational training and awareness for people with disabilities.

At birth, Austin, now 38, was diagnosed with down syndrome. Consequently, Austin’s doctors told Jan that he would be dependent on his parents throughout his life. However, with special support over the years, Austin graduated from high school. Next, Jan found a Special Services Vocational Training Program at Eastern New Mexico University where Austin became a certified prep chef. Since graduating, Austin has held several jobs in the food service industry. 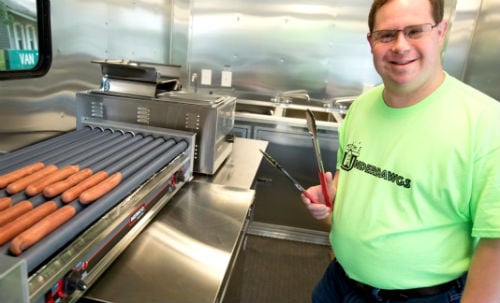 “My vision for Austin was for him to go to a regular school when he was younger and become an independent adult,” Jan told RVlife.com. “So, my biggest fear was that he would be sitting at home under supervision. I just couldn’t see that in his future. Further, Austin’s dream was to own a restaurant. With the start-up of Austin’s Underdawgs, that is exactly what he is doing. All of the efforts we are making now are part of an overall goal to help those in similar situations. We want to provide others with limited abilities the same opportunity that Austin had.”

Currently, the fund-raising campaign for the Class C consists of three-stages. The first stage is to raise $25,000, which is to go towards the down payment for the coach. The second stage involves the raising of $30,000 for special modifications. The third stage requires raising $30,000 for finishing touches.

Donations for this part of the fund raising campaign are between $25 and $99. In return, supporters will receive a 13-ounce bottle of Austin’s authentic, private label Dawg Sauce (a raspberry chipotle barbeque sauce) and Austin’s digital cookbook, Be Daring with Dawg Sauce.

“The entire purpose of this venture is to raise awareness. We want to give back to various charities,” says Jan. “Getting this RV will simplify our business to raise proceeds while traveling across the country. With Austin, everything needs to be simple. We use an electric hot dog roller with an electric cooker-steamer. It’s imperative that Austin does every job. While he will not be able do it all himself, he has to learn as this is a multitask business.”

According to Jan, the Class C they are considering is through Motorhome Specialist in Alvarado, Texas, which sells 3,000 units a year, ranking them the largest volume dealer in the world.

Further, what`s interesting about the Class C (and many of the  Outlaw toy haulers from Thor Motor Coach) is the rear garage provides ample space for Austin’s cooking equipment. Plus, the exterior can accommodate their required service windows and countertops for customers. A comprehensive point of sale system, outdoor music system, and a vehicle wrap are other ideal additions.

“I have seen lots of modifications of RVs for owners over the years,” says Kelly Obanion, co-owner of  Motorhome Specialist.  “I believe the Thor Outlaw would give them what they really need. The toy box in the back can easily hold all of their cooking equipment. They could even put in a three-tiered sink if they need to.”

How You Can Help People with Disabilities

Jan also explains the Thor Class C will be part of further fundraising tours in other parts of the U.S.

“We plan on Austin’s Underdawgs being around for years to come.  Further, the business model is to raise proceeds. It`s essentially to provide support for families and charities and improve the lives of people with disabilities.”

For contributions and more details visit pieshell.com. Or go to Austin’s Underdawgs for individual donations or if interested parties want to book its catering services for additional fund raising efforts.