You are here: Home / Top Stories / Ingenuity in the Desert
This post may contain affiliate links or mention our own products, please check out our disclosure policy here. 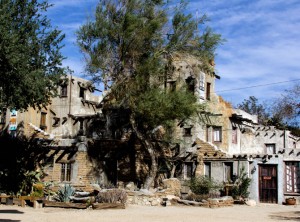 Walking through Cabot Yerxa’s intriguing, rambling adobe structures built on erratic terrain is to experience the whims of a Renaissance man. This is not a place anyone is likely to stumble upon by accident. Situated on a rural back road near Desert Hot Springs in Southern California, Cabot’s Pueblo Museum juts out from rocks and cacti, welcoming visitors who have read or heard stories about this strange compound.

Approaching on Desert View Avenue, you come to an entrance gate that accommodates cars and small RVs. (The staff advises owners of larger rigs to enter through the exit gate and go up to the third level to park.)  From the parking areas, visitors can wander the grounds dotted with interesting buildings built of crude faux adobe; however, it’s the buildings’ interiors that tell the real story of Cabot Yerxa and his fascinating life.

After paying the entrance fee, we watched a short video that outlined Cabot’s background and told how he arrived at this once-remote outpost. And then we learned more about the man as we toured the five-acre compound and the odd structures he assembled from mud and abandoned cabins.

Cabot’s parents, Frederick Yerxa (the name was changed at Ellis Island from the Dutch “Jurckse”) and Nellie Cabot, moved from Boston to the Dakota Territory and then Minneapolis/St. Paul to seek their fortune, which they eventually attained—and later lost. By the age of 15, young Cabot Yerxa was managing one of the family’s grocery stores, supervising 23 employees. But then wanderlust compelled him toward a different path. 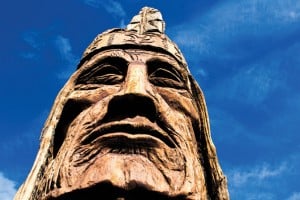 In 1900, he invested his $1,700 in savings to buy cigars, chewing tobacco and jerky, and took a train to the West Coast, where he boarded a ship for Nome to take advantage of the Gold Rush. Once in Alaska Territory, he set up business in a tent, part of which he rented out for extra income. When his tenants moved on, his finances dried up. But before he returned to the states, he spent time with the Inupiat First Nations tribe, recorded their language and later sold his translations to the Smithsonian Institution.

Taking advantage of training from his youth, he opened a grocery in Moorpark, California, where he met land developer L.W. Coffee. Cabot moved to what is now Desert Hot Springs and in 1913 became one of the area’s first homesteaders. He encouraged Coffee to come to the area, and it was Coffee who succeeded in turning this forbidding area into a lavish resort community. Coffee prospered; Cabot did not, but he lived the life he loved as he carved out a monument to his eclectic abilities, making the most of his inherent ingenuity and knack for recycling the spoils of the desert.

When he first settled here, Cabot had to walk seven miles to the train station in Palm Springs to get water. Then, he learned about the aquifer that was to give Desert Hot Springs its name. The first well he dug bubbled with 132-degree water, but he drilled a second well 600 yards away and found cold water. Well-digging eventually became a source of income. 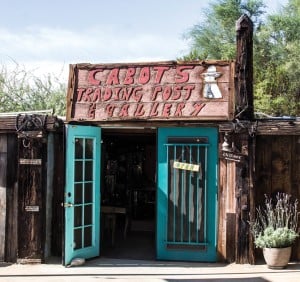 He scrounged materials from dilapidated desert cabins, downed telephone poles and other sources but did not begin building what became his home and is now known as Cabot’s Pueblo Museum until 1941. He continued to work on it until his death in 1965 at the age of 81. Eventually, Cabot’s pueblo, modeled after Hopi Indian pueblos, included 35 rooms in four stories, with 150 windows and 65 doors.

Practical Steps
Our tour of the compound began outside with a guide explaining what we were about to see before leading us into a gallery with historic photos and clippings that document Cabot Yerxa’s adventures.  Then, as we began to tour the rooms, we began to understand how the eccentricities of the man actually make sense.  He managed to incorporate common-sense ideas into a comfortable home using reclaimed materials. One of his innovations was to use the Venturi effect, which explains that small openings increase the speed of airflow. That was an important concept in a home built in triple-digit heat.

That theory works well with the openings between rooms and the myriad of small windows that he rescued from the fallen-down cabins among the burning sands.  We also realized that he began his construction with a thick retaining wall made with mud that became adobe strengthened with a bit of cement.

Narrow doors, passageways and tight stairways separate rooms, and throughout the tour, the guide acquainted us with Cabot’s practical engineering.  The interior is crude but it’s easy to feel how comfortable it was for Cabot and his family. 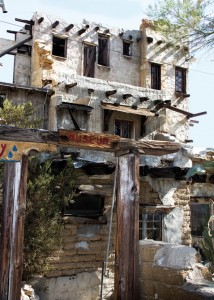 The bad news: the home was stripped of many of the original artifacts during the 1960s after Cabot’s death.  The good news: when efforts began to restore the home and make it into a museum, some residents either returned items that had been stripped from the property or contributed relics from the days when Cabot was homesteading the land.

As this once-desolate Desert Hot Springs area grew around him, Cabot was content to etch his personality into his own domicile. He had lived an adventurous life that included travels to Mexico, Cuba and Europe, study at an art school in Paris and the collection of art from native peoples in Alaska, the Pacific Northwest, Mexico, and the Southwest. (The display of Indian pottery and crafts is one of the attractions of the museum.)

The tales and travails of Cabot Yerxa, his family, his various careers and the growth of the area are worth the short trip across the desert. Once through the gate of his home, we are into a different world that is a unique tribute to man’s ability to survive and thrive in harsh surroundings.

The museum offers five guided tours a day Tuesday through Sunday from October 1 to May 31. Cost of the tour is $11, or $9 for seniors, military personnel and children from 6 to 12. For information, visit cabotsmuseum.org. There are numerous RV parks in the area, including Sky Valley Resort and Caliente Springs Resort. More information is available at campgroundreviews.com/regions/California/Desert_Hot_Springs.html.

Barry Zander and his wife, Monique, are seasoned RVers who travel the country.