You are here: Home / Top Stories / Is RVing Safe in Mexico?
This post may contain affiliate links or mention our own products, please check out our disclosure policy here. 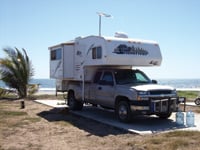 Like many others in the rainy Pacific Northwest, I dreamed of a retirement spent escaping to sunnier climes each winter. But where?  California was too expensive; Arizona could get surprisingly cold. And Florida?  Well, that’s the home of my ex-mother- in-law.

The alternative appeared to be to go south to the land of drug cartels, corrupt police, bad roads, and criminals ready to rob you at every opportunity. At least that is how the press and stereotypical wisdom have depicted our Mexican neighbors.  I decided to take a chance anyway.  I fitted my camper with a car alarm. I ensured I could get from the inside of the camper to the cab of the truck in case I was attacked at night. I installed enough bright outside lights for a football field, and also purchased a nice large machete. The only thing missing was barbed wire to discourage illegal immigrants from hitching a ride back into the U.S. Totally paranoid, but well prepared, I headed south with much trepidation, if not outright fear, into what many believe to be a war zone.

My first obstacle was the paperwork and insurance necessary to take an RV into Mexico. As in most Latin American countries, Mexicans love paperwork and my first trip down there was a nightmare of forms and permits. Six years later I now have all this figured out, and will share this knowledge in an article next month. 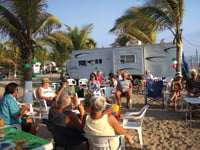 My first RV trip to Mexico started at Nogales, Arizona. After spending the night at the Bates Motel of RV parks, I prepared to head across the border. I had been told that the Mexican side of Nogales should be avoided at all costs. I thought, “Heck, it can’t be worse than the RV park where I spent the night.” I was advised to use the Mariposa, or truck crossing, which bypasses the town and provides a fenced corridor to the inspection station on the Mexican side. Imagine my surprise when, heading south from Nogales, I found myself on a four-lane highway that rivals a U.S. interstate. My first misconception was shattered! Not all roads in Mexico are rough dirt tracks.

My first day took me to San Carlos, where I checked into Totonaka RV park, a large well-maintained full-hookup facility. Misconception number two hit the dust; Mexico actually has modern RV parks and I was not going to have to find an isolated hillside somewhere to dump my black-tank contents in the bush (while no one was looking). 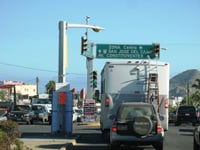 I made the mistake of not having a GPS or buying a detailed map book. Two days later, I found myself on an ever-narrowing dirt road headed into a cornfield after taking a wrong turn while looking for a campsite. As I was turning around, a man drove up in a beat-up pickup truck and asked if I was lost. I responded positively; he motioned me to follow him, and 20 minutes later I was back safely on the highway. He flatly refused my offer of $20. Misconception number three gone!  Everyone is not out to cheat and rob you. Even after six years of traveling in Mexico, it never ceases to amaze me how hard it is to pull over to the side of the road for lunch without people stopping and offering help.

So is Mexico safe? This is the first question I am asked every time I present a seminar on RVing in Mexico. It is a difficult question to answer honestly. I do not want to say yes, because Mexico is still a transitional Third World country. I do believe one’s chances of being robbed are higher in Mexico than in the U.S. I do not, however, believe there is any greater chance of being murdered. No one can deny that Mexico suffers from violent drug problems, but almost all murders are “targeted.” If you become involved with drugs or associate with those who do, you may be seriously at risk. It appears to be an unwritten code that tourists are off limits, which is comforting. The cartels realize that tourism is Mexico’s biggest industry and that the government will pull out all the stops if the cartels target tourists.

There are a few basic rules governing safe travel in Mexico:
• Do not drive after dark. If stuck, sleep in a busy Pemex station lot and pay the night guard to watch your rig. Parking areas at tollbooths are another option.
• Do not boondock; use established RV parks.
• Identify and avoid known trouble areas such as Ciudad Juarez.
• Use toll roads whenever possible. 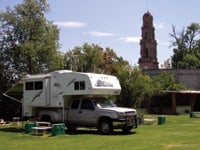 I now feel safe enough traveling in Mexico to have taken our 5-year-old granddaughter there two years in a row. I have met many other RVers traveling with kids. In six years of RVing all over Mexico, I have never had an issue with safety. As I tell those who express concern (like my parents), I did not work 30 years to get my travel thrills lying on a couch watching the National Geographic channel.

First timers to Mexico should consider sticking to the toll roads (cuotas) whenever possible. They charge by the axle and can seem quite expensive, but for the most part they are up to U.S. interstate standards and free of the ubiquitous “topes” or speed bumps found all over country. They are also safer and one has far less chance of being in an accident. On the free roads (libres) you can find yourself crawling behind a sugar cane truck or having difficulty with low trees and narrow village streets. It is often best in small towns with which one is unfamiliar to follow a bus or check out a route beforehand on a bike or in a tow car. The toll roads are patrolled continuously by the Green Angels (think AAA), whose job is to assist tourists in trouble. They also patrol the free roads but not as frequently. The service is free; you pay for parts but not for labor.

Remember that in Mexico, RV parts are difficult to come by. I recommend bringing an extra sewer hose and fittings and a surge protector to protect your electronics, as power in Mexico is not reliable. Drink only bottled water. Refillable large jugs are available everywhere and are inexpensive. Delivery direct to RV parks is common. Use an inline filter to keep sediment from your tanks. All fuel is sold by the state-owned Pemex corporation. Propane is sold separately at vendors like Global Gas, and vendors will often cruise through campgrounds. For your vehicle, carry an extra oil and fuel filter, and have your vehicle checked over before you go. Ultra-low-sulfur diesel (ULSD) fuel, mandated in the U.S. for diesel trucks built since the middle of 2007, is available across Baja California, but not on the mainland.  However, many people seem to ignore this without difficulty.

Everyone contemplating a trip into Mexico should obtain the book Mexico Camping by Mike and Terri Church (see rollinghomes.com). This is the bible for RVing in Mexico and contains lists of campgrounds, coordinates and routes to them. Check their website for updates and closures. Other useful sites are ontheroadin.com run by Dot and Bill Bell and Mike Nelson’s site at mexicomike.com.

For an apprehensive “first timer,” a good option is an organized RV caravan. This enables you to travel with a group and a wagon master who knows where you can safely take your RV. Mexico is full of physical hazards: low trees, tight roads in villages, dead-end roads, and archways that can make travel for big rigs especially hazardous. A caravan avoids places that would be hazardous for your rig. A caravan is also a way to discover places that you may wish to return to later on your own. A good wagon master will help you navigate through all the paperwork at the border crossings.

Most caravan tours include transportation to attractions that would be impractical to visit in an RV. If the rigid schedule of a caravan does not appeal to you, you might try to find like-minded people with whom to travel at websites such as mexicotravelbuddies.com. This can be a good option for those who have taken a caravan tour and now are ready to be more on their own.

I hope I have interested you in considering an RV adventure to Mexico either on your own or in a caravan. Next month, I will explain the rules, regulations and paperwork required to travel by RV in Mexico. Like it or not, there’s no escape from bureaucracy!

Paul Beddows is past president of the North American Truck Camper Owners Association.  He presents seminars on Mexico at RV shows and has written several magazine articles on the subject. He works part time with Caravanas de Mexico and lives near Vancouver, Canada, in summer and in Mexico in winter.