You are here: Home / Columns / First Glance / Love Bug Comes Home
This post may contain affiliate links or mention our own products, please check out our disclosure policy here. 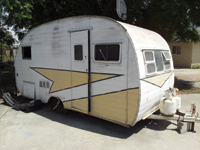 For most of his life Dean C. Hanson has owned RVs, including a 1973 GMC motorhome, a Winnebago and an Airstream, but nothing quite matches the 1952 Hanson Love Bug that recently came into his possession.

What makes the Love Bug special to him—beyond the fact that it is a charmingly retro work of art—is that he may have helped build it more than 60 years ago in his father’s factory.

His first job at the factory in Glendora, California, was sweeping out the cabinet shop. By the time he was 10 he was starting to work on trailers, and one of them might have been that 1952 Love Bug. He wouldn’t have been doing any interior work then, Hanson said, but “I might have pounded some nails in it.” 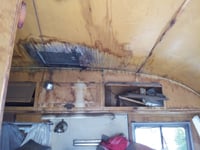 Dean is the son of Henry M. Hanson, an important figure in the history of the RV industry, and an innovator in the use of aluminum in trailer construction. The elder Hanson began his career in the trailer business by buying mobile homes, fixing them up and selling them in the Midwest and the South. During World War II, he moved to Southern California and went into the business of raising chickens.  His first claim to fame was inventing a machine that became widely used by chicken processors to remove feathers.

Dean said his father was not an engineer, but an “imagineer.” He had the vision to see what was needed, and he hired talented engineers and others to make it happen. That ability served him well when he went into the travel trailer business in 1948 in Glendora, east of Pasadena, selling factory direct. For $99 down and just $27.90 a month in 36 easy payments, you could own a Hanson Love Bug.

Love Bugs were aluminum trailers from 10 to 22 feet in length. They didn’t have a bathroom, but they could sleep at least four comfortably and were equipped with a stove, refrigerator, sink and dinette.  They had a unique design that accommodated an enclosed room you could attach at your campsite. (The factory also built larger travel trailers that were called custom coaches.) 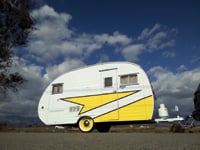 As he built his trailers, Hanson developed processes and techniques for using aluminum, and that led to his founding of Automated Metals Corporation. During the 1950s and ‘60s, that company supplied more than 75 percent of the aluminum used in the RV and mobile home industries. Dean Hanson said Wally Byam, who founded Airstream, worked for his father for a while. Family friends included auto and aluminum magnate Henry J. Kaiser; oilman J. Paul Getty, whose interests included Spartan trailers, and John K. Hanson, the first president of Winnebago.

Henry Hanson gave up building travel trailers in 1958 in order to devote his time to his aluminum supply business. (Another company, Kenskill, took over production of the Love Bug and continued it for two more years.) 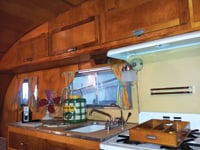 Dean Hanson said his family didn’t keep any of the trailers its factory produced, but he built a Love Bug on his own in 1967 and later sold it to a friend. Like his father, Dean Hanson has had a successful career as a businessman and entrepreneur, starting at the age of 16 when he was put in charge of the family’s trailer rental business.  He went on to build RV and mobile home parks, create helicopter, airline and air ambulance businesses, and construct more than 5 million square feet of industrial buildings and shopping centers.

Recently, Hanson, now living in Fremont in Northern California, asked Mike Rivera at Vintage Trailer Store in Ontario to try to find him a Love Bug travel trailer.  Rivera found one that was sitting unused for years but still belonged to the original owner, who had taken delivery from Henry Hanson at the Glendora factory back in 1952.

The trailer needed quite a bit of work, particularly with leaks around the windows and vent. But it still had the original refrigerator, stove and water heater, all in working order. 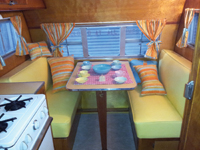 Rivera and his team restored the Love Bug to its original glory. They didn’t try to update it, but kept everything as it might have been when it emerged from the factory more than 60 years ago. Rivera said it took 350 hours of work, but now “it looks like it did in 1952.”

Hanson took delivery of the 17-foot Love Bug in Ontario, hitched it up to his Chevrolet Suburban and drove past the site of the old factory in Glendora (now an industrial park) on his way home to Northern California.

“That 62-year-old lady pulled like a dream—straight and true,” Hanson told me. “It brought back a ton of memories.”