You are here: Home / Top Stories / Majestic Sequoias for RV Trekkers
This post may contain affiliate links or mention our own products, please check out our disclosure policy here. 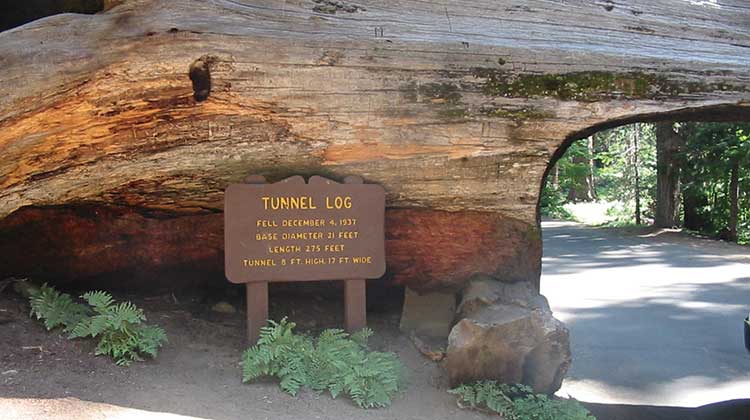 As John Muir hiked the Sierra Nevada mountain range in California in the late 19th century, superlatives came to mind. He was astounded by the gigantic Sequoia trees growing in fantastic groves, and amazed by the beauty of valleys such as Hetch Hetchy, Yosemite and Kings Canyon. Muir fought to safeguard the big trees and deep valleys where he had hiked, and though he lost the battle to preserve Hetch Hetchy, he succeeded elsewhere.

“The Big Tree (Sequoia gigantea) is Nature’s forest masterpiece, and, so far as I know, the greatest of living things,” Muir wrote in his 1901 book, Our National Parks. “No description can give any adequate idea of their singular majesty, much less their beauty…The great age of these noble trees is even more wonderful than their huge size, standing bravely up, millennium in, millennium out, to all that fortune may bring them, triumphant over tempest and fire and time, fruitful and beautiful…”

John Muir was best known for his work to preserve Yosemite, and for leading perhaps the first battle of the environmental movement, an unsuccessful effort to prevent the City of San Francisco from building a dam and flooding the Hetch Hetchy Valley to create a reservoir. An effort to build a similar dam in Kings Canyon wasn’t resolved until 1965, when the valley was finally and forever protected as Muir long ago had wished. 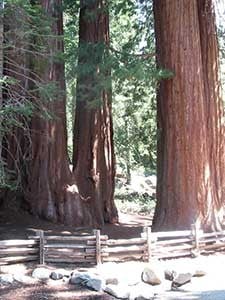 For the RV trekker, the best approach is on California Highway 180, which leads to the Big Stump Entrance Station, located in the small segment of Kings Canyon that was once General Grant National Park. Many roads in the combined Sequoia and Kings Canyon national parks either have warnings about limitations on the size of vehicles or are completely closed to motorhomes and trailers. Park maps and brochures obtained at the entrance stations (and online at nps.gov/seki) will help guide travelers.

The Grant Grove area, near the Big Stump entrance, has the Grant Grove Village and the Kings Canyon Visitors Center. Also nearby are two campgrounds. Azalea Campground is open all year on a first-come, first-served basis, and in summer has 110 sites. Nearby Sunset Campground has 157 sites, some of which may be reserved. Three warnings should be given: First, none of the campgrounds within the parks have hookups. Some sites have flush toilets, water, showers and other amenities, while others are more primitive. Second, dump stations are available only at some campgrounds. Third, there are no gasoline stations within the park boundaries, although services are available just outside.

As you travel north on Highway 180 and leave this first section of Kings Canyon National Park, you enter the U.S. Forest Service’s Giant Sequoia National Monument. While the trees are protected here as they are in national parks, different rules apply. Five campgrounds and fuel and other services can be found near Hume Lake. 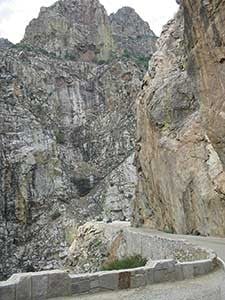 The road into Kings Canyon is carved into cliffs. Photo Credit: Kurt Nelson

Continue on this road, which is usually open from late April until mid-October, and you enter the larger, more remote part of Kings Canyon National Park. The views are jaw-droppingly awesome. Literally carved into the side of cliffs, the road to the canyon floor is well worth the drive, and once you arrive at the floor of the vertical-walled, glacially carved canyon, you will find astounding scenic views. The small Cedar Grove Visitors Center offers information and helps direct RV campers to the best locations in the three individual campgrounds. While none of the campgrounds have hookups, all have flush toilets and water. None of the campgrounds accept reservations, but an early visitor rarely has trouble finding a camping spot. 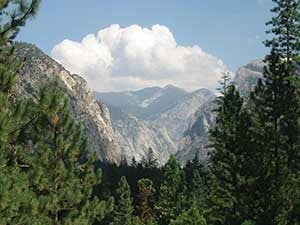 Spectacular views can be found from the floor of Kings Canyon. Photo Credit: Kurt Nelson 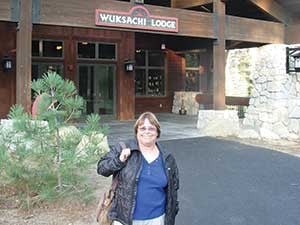 Backtracking on dead-end Highway 180 takes the traveler toward Sequoia National Park and the big trees, but first you again pass through the Forest Service’s national monument, with lodges and Stoney Creek Village, which has a gas station and a campground. Inside Sequoia National Park are two large campgrounds, including one with a store, laundry, and showers. Between the two campgrounds is Wuksachi Lodge, which has rooms and cabins for rent as well as an upscale restaurant. We last dined there on my wife’s birthday and had a nice meal with spectacular views out of the glass walls that reach 20 feet high. 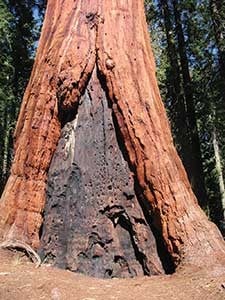 This giant Sequoia was scorched by fire, but not destroyed. Photo Credit: Kurt Nelson

Farther south is the General Sherman Tree Trail, which provides a short hike to view the Sequoia tree that is one of the largest living things on earth! Just a little farther south is the Giant Forest Museum, where you can gain an understanding of forest ecology. An ample parking lot allows you to leave your car behind to hike into the forest along the Big Tree Trail. The Sequoia’s thick bark enables it to withstand fires that sweep through forests, and here you can see evidence of that. One tree stands out in my memory. Scared by fire, the tree trunk looked like it had a door with the curtains pulled aside, welcoming the visitor to enter a fairyland. As you walk the trail, you encounter trees, like the Clara Barton Tree, that were given names to honor national heroes. 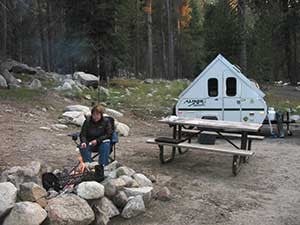 Two side roads near the Giant Tree Museum lead to other attractions. One takes you to the Crystal Cave, which offers underground tours of spelunking splendor, but a word of caution. It takes a ticket to enter the caves and it cannot be purchased at the cave. Tickets may be purchased at the Foothills Visitors Center, Giant Forest Museum or the Lodgepole Visitor Center.

The other side road meanders through the trees to several sites. Moro Rock is a bare granite outcropping sticking out into a side valley with unrestricted views (other than smog). The short, but steep, hike to the top of the 6,725-foot fenced summit permits sightlines to the valley southwest of the park and to 14,494-foot Mount Whitney.

Farther east along the road is the Tunnel Log. It is a tree that fell during the Great Depression and was carved to allow vehicles to drive through it for a great photo opportunity. At the end of the loop road is a trailhead to Tharp’s Log. Hale Tharp was the first homesteader in the park and a friend of John Muir. Tharp carved his home into a fallen tree and Tharp’s Log is that home, visited by thousands each year.

The next portion of the road through the park is closed to vehicles longer than 22 feet, including trailers. However, if you come from the south on California Highway 198 and enter the park at the Ash Mountain Entrance Station, you can establish a base camp at Potwisha Campground, which is open year-round. It has 42 sites, takes reservations, and has a dump station. Nearby is the Foothills Visitor Center (and park headquarters).

Just south of the park entrance is another road that leads back into the park and the Mineral King Ranger Station. Open in summer, this road is twisty and not recommended for trailers or vehicles longer than 22 feet. While there are two campgrounds along the road, neither will accept motorhomes or trailers.

With their immense trees and deep canyons carved by glaciers, Sequoia and Kings Canyon combine to offer RVers a getaway that astonishes and inspires. The hills are truly alive with unbelievable beauty, and waiting for your visit.