You are here: Home / Top Stories / Pickle Mania
This post may contain affiliate links or mention our own products, please check out our disclosure policy here. 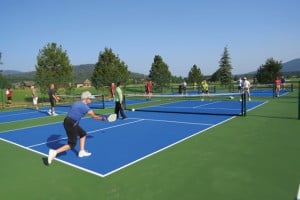 So, you’ve been to 40 or 50 states, maybe Alaska, Canada, the Maritime Provinces. What’s next? You get pickled of course!

Now that I have your attention, I don’t mean drinking. I’m talking about the fastest growing sport in the country—pickleball. It is addictive, fun, and social, played by all age groups, but especially embraced by us gently used seniors. Why? Because pickleball is kinder to our joints, bones and muscles.

The court is only one-fourth the size of a tennis court, and players use a small paddle slightly larger than a pingpong paddle to hit a perforated plastic ball that looks like a wiffle ball. You can play singles, doubles or mixed doubles.

Players often describe pickleball as a cross between tennis, table tennis and badminton. Play can be soft or rapid-fire, or both in a single game played to 11 points. A game averages about 15 minutes and provides a nice cardiovascular workout. Get tired? Just sit out a game or two, relax with your friends, and jump back in when ready. Pickleball is for men and women of all ages, and players are routinely spotted in their 60s, 70s and 80s. 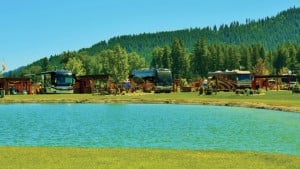 Pickleball was invented on Bainbridge Island near Seattle in the 1960s by three men looking to create a sport the whole family could enjoy. Today, RVers are playing a dominant role in spreading the sport, according to Ken and Ellie Hamill, who constantly review RV parks for their authoritative campground guide, Big Rigs Best Bets.

At RiverBend Motorcoach Resort just east of Fort Myers, Florida, an owner introduced the sport in 2011 by stretching a pickleball net between two golf carts in the parking lot. The RiverBend Pickleball Club was formed and the resort converted an old tennis court into four pickleball courts. Four new courts were added in 2014 and the club now hosts the RiverBend Classic, a popular tournament that draws more than 150 participants from across Florida and beyond.

Snowbirders who learned about pickleball in the Sun Belt have spread the popularity of the sport to RV parks in the north. My favorite northern RV resort, StoneRidge Golf and Recreational Community in the Idaho panhandle, just constructed six brand-new courts this summer, which complement its beautiful 18-hole championship golf course. 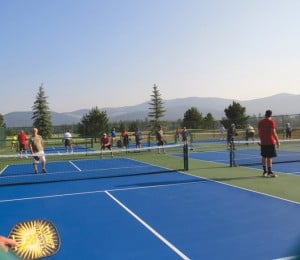 A number of RV parks are converting decaying, rarely used tennis courts into courts for pickleball, and new pickleball courts are being built at an astonishing rate.

Developers of retirement communities are adding courts to attract seniors, and the game is gaining a place in city recreation programs. In St. George, Utah, for example, the Huntsman World Senior Games in October will include pickleball competition on 14 courts at the SunRiver St. George retirement community and 12 new courts at a city recreation venue. (Pickleball also will be part of the Moab Senior Games in November in Moab, Utah.)

According to the USA Pickleball Association (USAPA), the number of locations where you could play pickleball increased by 36 percent last year to 2,838. And existing locations are adding more courts, raising the total number of courts at the end of 2014 to nearly 10,000.

Finding out where to play pickleball is easy. Just log onto the USAPA website (usapa.org), and click on “Places to Play.”  Courts are listed by state and community, with details and phone numbers. The USAPA website features tournament information, instructional videos, exercise tips, rules, and much, much more. In addition, there are more than 950 “Pickleball Ambassadors” (like me) whose names and numbers are listed and who are eager to answer your questions about the game.

If you’ve ever played tennis, handball or racquetball, you will love pickleball. 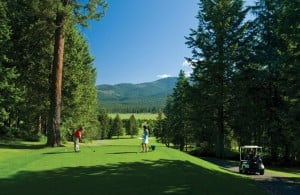 If you’ve never been an athlete, you can still enjoy the game. Most pickleball clubs offer free lessons. The sport is easy to learn, hard to master, but fun for all skill levels.

Walk or drive by any pickleball court and you’ll hear a lot of laughing, giggling and encouraging words being given. People truly love this sport. Why? Because it’s fun, exciting, and you can’t wait to play again. You might even lose a few pounds. Pickleball is fairly inexpensive (about $70 for a paddle, a couple of balls at $2 each, and a good pair of court shoes). Pickleball can be played both indoors and outdoors; however, I am partial to playing outside where I can see the beautiful scenery.

So, on a Monday, you’ll find me playing pickleball for a couple of hours in the morning.  On Tuesday, maybe I’ll play a round of golf.  Wednesday, pickleball again?  So many decisions…