You are here: Home / Blog / Play Better Golf by Walking the Course
This post may contain affiliate links or mention our own products, please check out our disclosure policy here. 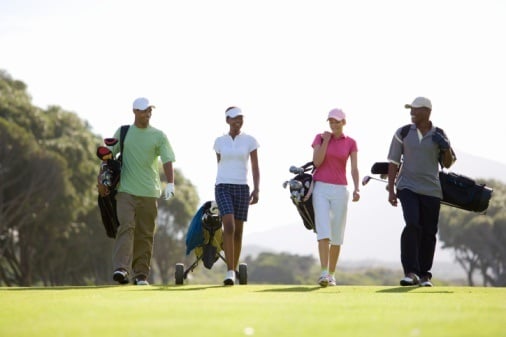 Walking when you golf burns almost twice as many calories as riding in a motorized cart, which is a significant physical benefit.

Walking a golf course gives you the best of both worlds. You get plenty of exercise, and your enjoyment of the game is greatly enhanced.

According to the Walking Golfers Society, there are four primary benefits of walking when you golf:
• Physical – You burn almost twice as many calories as you would riding in a cart.
• Scoring – You shoot better scores than those who are riding in a cart.
• Social – You have a much better opportunity to interact with all of your playing partners.
• Experience – You can fully enjoy the natural beauty of the course from tee to green.

Neil Wolkodoff, director of the Rose Center for Health and Sports Sciences in Denver, recently completed a study at the Inverness Golf Club in Denver, which discussed the physical benefits of walking when you golf.

Wolkodoff found eight male volunteers, aged 26 to 61, with handicaps between two and 17 to participate in an experiment that would analyze energy consumption and scoring while playing several nine-hole rounds of golf.

The participants wore equipment that measured such variables as heart rate, oxygen consumption, carbon dioxide production, and distance covered per round.

Each golfer then played nine holes at Inverness in four different scenarios:
• Carrying a bag
• Pushing a cart
• Golfing with a caddy
• Playing with a motorized golf cart

So, the study estimates that walking when you golf burns almost twice as many calories as riding in a motorized cart, which is a significant physical benefit.

The Walking Golfers Society is dedicated to providing information about the many benefits of walking when you golf, which is how the game was intended to be played.