You are here: Home / Top Stories / Rowing Across the Border
This post may contain affiliate links or mention our own products, please check out our disclosure policy here. 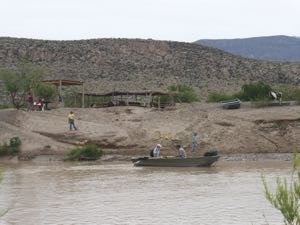 Those of us who have traveled extensively know the usual drill at border crossings: you wait behind a line of fellow travelers or in a vehicle that inches slowly forward as questions are asked and passports are checked and stamped. That’s not the experience at Big Bend National Park’s Boquillas Port of Entry.

After being closed for a decade, the park’s border crossing into Mexico reopened on April 10, 2013. The crossing is about 25 miles southeast of the park headquarters, and a short distance beyond the park’s Rio Grande Village. The adobe-style U.S. port of entry building belies the retro experience.

After walking inside the building, we had the pleasure of meeting a National Park Service ranger, Brittney Mitchell, who gave us some pointers on the border town we would be visiting. She told us 45 individuals had crossed on the previous day, which was a Wednesday. The record number of daily crossings since the reopening was 184.

The air-conditioned port of entry building has a side door that opens onto a small patio where public restrooms are located. From there a path leads down to a gravel riverbank where visitors await transport that will carry them across the Rio Grande River. The transport is a rowboat, which in our case was powered by the two arms of a constantly smiling young man, Carmello, who lives across the border in the small village of Boquillas. 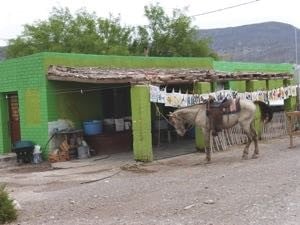 While waiting for Carmello to row the boat to the U.S. side of the river, we spotted several individuals on the opposite riverbank including a few children, a dog or two, a small corral with several horses and burros, a couple of older vehicles, and a table behind which a man was singing very loudly in Spanish. The trip in the rowboat across the slow flowing river took several minutes.

When we arrived, the singer quickly transformed himself into a ticket seller and collected $5 per person for the river crossing, and another $5 to transport us to and from Boquillas. The town is about a mile from the river. While collecting the fare, the ticket seller mentioned several times that tips for his singing could be deposited in the prominently displayed empty milk carton that sits on the table in front of him. And to emphasize the point, a handmade sign attached to the milk carton mentioned that tips were accepted.

After paying the fee, each visitor must choose a mode of transport into town: a burro, a horse, or the back seat of an old truck. Under the circumstances, the burro mode seemed most appropriate. Regardless of the choice, someone tags along to serve as a guide. Our guide, Gabriel, offered background on the town, provided information about individual buildings, and talked with locals he met along the way. No specific fee was attached to the guide service, although a tip was implied. Walking through the village with a guide substantially enhanced the experience.

After climbing off the burro, it was time to enter the Mexican port of entry in Boquillas and have our passports stamped. A relatively new trailer serves as the port of entry, and the Mexican official who stamped our passports was wearing a handsome white uniform. He was also a very pleasant fellow who seemed pleased that we were visiting his country. 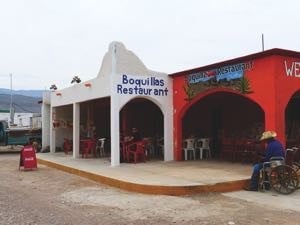 Boquillas has two restaurants, two gift shops, and a motel that wasn’t open during our visit. The town of about 200 individuals and 40 families includes modest homes, dilapidated buildings, an impressive solar farm that supplies the small community with electricity, and quite a lot of portable toilets scattered about. Numerous individuals had set up small tables covered with handmade items that were peddled, but not aggressively, by small children. The whole experience was kind of like a dream from a nonviolent Clint Eastwood movie.

After a couple of hours, which included a stop at one of the restaurants for some enchiladas and beer, we decided to head back to the river. Before departing Mexico, however, we first stopped at the Boquillas Port of Entry trailer to have our passports stamped by the friendly official. It was then time to ride the burros back to the Rio Grande, climb in the rowboat, and have Carmello row us back to the good old USA, where we strolled up to the port of entry and presented our passports. There, our new friend Brittany inserted the passports into a machine that that looks like an ATM. Ten or fifteen seconds later the attached telephone rang and a customs agent from El Paso asked a few questions, including whether we returned with any merchandise. Then, we were on our way. What a great way to spend part of a day!

What You Need to Know 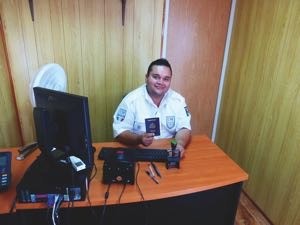 The Boquillas Port of Entry is open from 9 a.m. to 6 p.m. Wednesday through Sunday. Don’t forget to pack your passport, which is required to enter Mexico and reenter the U.S. American dollars work fine, and most adult residents you will encounter speak English. Children who were unable to mingle with Americans during the years the border was closed generally speak only Spanish. The prices for food and craft items aren’t particularly cheap, but you may want to pick up a little something to take home. The cost of a plate with four enchiladas, a beer, and a bottled Coke was $10.25. Several people who drank Coke at the Boquillas restaurant mentioned that it was superior to Coke sold in the U.S.