You are here: Home / Blog / RV Travel Tales: Yellowstone—A Place of Wonder
This post may contain affiliate links or mention our own products, please check out our disclosure policy here. 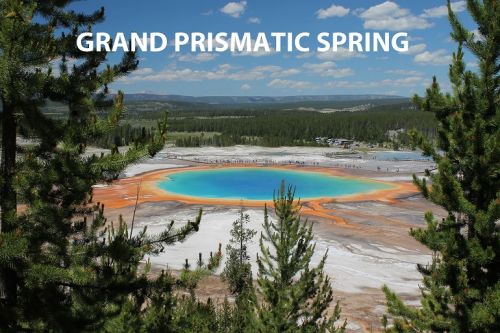 Driving through Yellowstone National Park in summer twilight, banner-like flumes of white steam contrast a darkening sky. Someone entering the park with no knowledge of its thermal features might think the lodgepole forests or the lush green meadows were on fire. Early fur trappers and explorers may have initially had those thoughts. Although history documents that Native Americans used Yellowstone as a hunting ground and a place for fishing and gathering plants, they may have held superstitions about the area’s steaming pots, pools, and geysers. Winter’s frigid temperatures and heavy snow discouraged most humans from calling the vast wilderness home.

Within Yellowstone’s boundaries, more than 10,000 thermal features hiss, spew, boil, and burble. Over 500 of these steaming features erupt as geysers. Indeed, the majority of the world’s geysers are found in Yellowstone. Visitor Centers within the park’s different villages do an excellent job of explaining the different features: geysers, hot springs, fumaroles, steam vents, and mud pots. The center at Old Faithful, in particular, puts in plain words why the different features spray hot water high in the air, spew steam from a hole in the ground, or gurgle and plop with thick mud in natural “pots” in the earth’s crust.

Geysers are hot springs that erupt periodically. Some, like the famous Old Faithful, are predictable. Others may spout hot water every few hours, every few days or months, or even every 50 years. At Old Faithful’s Visitor Center, visuals explain how rain and snow seep into cracks in the earth. Hot rocks called magma, beneath the earth’s surface, super heat the water which becomes trapped in narrow channels. Because the water cannot readily vaporize, steam escapes in bubbles that collect in tight spots, building pressure that eventually forces the violently boiling water to shoot high into the air. The reservoir of water near the magma eventually is depleted or the steam runs out and the geyser lies dormant until the pressure once again builds. Two types of geysers are found in Yellowstone: fountain geysers, which shoot water out in various directions through a pool, and cone geysers that perform much like a fireman’s hose, shooting highly pressured water in a narrow jet from a cone-like formation.

Hot springs are similar to geysers, but their underground channels are large enough to allow water to circulate. The rising hot water releases its energy by steam or hot water run-off. The micro-organisms that live in and around the hot springs create vivid colors of gold, russet, and green. Typically the pool formed by the hot spring is emerald green or sapphire blue. Some hot springs are small; others like the Grand Prismatic are quite large. And the colors in the run-off paths vary with the bacteria or minerals in the water.

Fumaroles are holes or vents in the land’s surface from which steam rushes in a hissing or spewing sound. Fumaroles are like hot springs, but without a pool. Visuals at the Visitor Center explain that either there is not enough water from melting snow or rainfall—or the underground rock is so hot that the water is boiled off and becomes steam.

Mudpots form in areas of sediment much like clay. Super-heated steam below the earth forces its way upward through the mud and ground water, often sending hot plops of mud into the air. Different minerals in the soil give mudpots various colors and the boiling mud different consistencies.

Thermal features are found all over Yellowstone—even under the waters of Yellowstone Lake. However, the park names its major geyser basins: Upper, Midway, Lower, Norris, West Thumb, Shoshone, and Heart Lake. Boardwalks traverse the different basins so visitors can closely view the wonders of Yellowstone. While the last major volcano occurred over 600,000 years ago, nearly molten rock yet lies as little as two to five miles below the earth’s surface in some places. Thus, the need for boardwalks and the warnings to guests to remain on the safety of the raised walkways. (Only the resident bison are permitted to walk wherever they please. I wondered how many fall through the thin crust.) In early days, people were not so cautious. Old photos show visitors walking around the boiling, bubbling pools—even dousing their bare feet in the hot water. In the beginning, administrators did not understand the danger of the thin earth’s crust giving way under a person’s weight. After all, Yellowstone sits inside an ancient crater of a volcano—a volcano that still heats the ground water and forms the mystifying thermal features characterizing America’s first national park.

When visiting Yellowstone, it is easy to get caught up in its natural beauty—the awesomeness of the mountains, trees, animals, and thermals. But Yellowstone was formed in the violence and heat of a volcano; it has been colored and shaped in subsequent years by wind and water from rain and snow melt. We often forget that beneath the black, grainy volcanic soil in Yellowstone, hot lava simmers. It may well stir and churn another 600,000 years. Yet, it might not.