You are here: Home / Blog / The 19th Hole: Book Review: Arnie, Seve, and a Fleck of Golf History
This post may contain affiliate links or mention our own products, please check out our disclosure policy here. 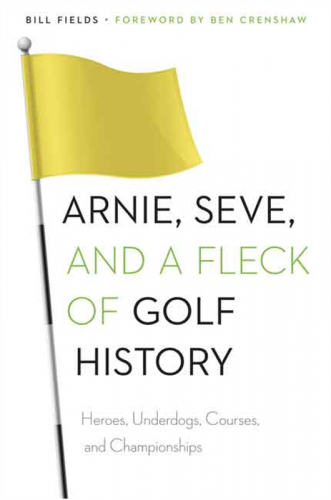 “Golf provides a deep menu of writing possibilities,” wrote Bill Fields in the introduction of his recently released book, Arnie, Seve, and a Fleck of Golf History; Heroes, Underdogs, Courses, and Championships. The 30 stories included in the book, which were published in Golf World between 1994 and 2011, are part of Fields’ effort to chronicle the game.

The book is filled with colorful moments and perceptive observations about golf greats ranging from the first American-born U.S. Open champion, Johnny McDermott, to Seve Ballesteros, the Spaniard who led Europe’s resurgence in the game in the late twentieth century. Fields gives us golf writing at its finest, capturing the game’s larger dramas and finer details, its personalities, and its enduring appeal.

This broad mix of subjects within the anthology includes portraits of Sam Snead, Byron Nelson, and Ben Hogan, America’s great triumvirate born a century ago. His profiles of Jimmy Demaret, Billy Joe Patton, and Bert Yancey speak to the rich characters who have inhabited the game of golf. Fields also writes revealingly about the unique putting challenge at Augusta National Golf Club, where generations of champions have tried to solve those baffling greens.

Chapter 22 discusses “A Fleck of History,” which is part of the book’s title. The chapter summarizes Jack Fleck’s stunning upset of Ben Hogan in the 1955 U.S. Open. He writes: “It didn’t do Jack any good to beat Hogan because the whole world wanted Hogan to win his fifth Open,” says Tommy Bolt, the 1958 U.S. Open champion. “And it made him a villain.” Fields gives a chronology of Fleck’s life from that point on, and colorfully so.

A senior editor at Golf World magazine, Bill Fields is a four-time winner of the Golf Writers Association of America’s annual writing contest. His work has also appeared in Golf Digest, the New York Times, and The Best American Sports Writing.

Published by the University of Nebraska Press, the book retails for $19.95 and is available at major bookstore outlets.