You are here: Home / Blog / The Full-Timing Nomad: Where Do Full-timers Go During Winter?
This post may contain affiliate links or mention our own products, please check out our disclosure policy here. 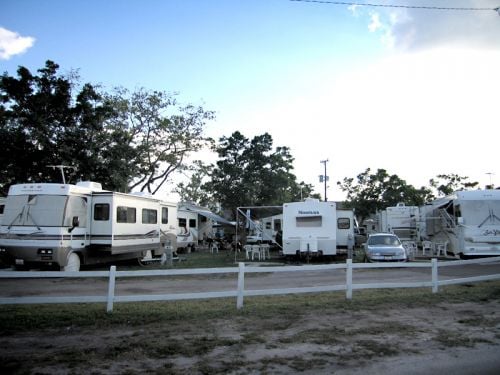 Do you shudder at the thought of long, cold winter months? Do you find yourself fantasizing about spring whenever December rolls around?

Some people enjoy the coldest season of the year but I prefer to put it as far behind me as possible – literally. Visit any RV park in the Southwest or Florida between November and April and you’ll find millions of others who feel the same way: one of the best reasons to go full-time RVing is the ability to live in temperate weather, any time of year.

The “snowbird” migration starts as early as October, which is when you’ll see endless caravans of winter escapees making a southerly beeline on our nation’s highways. In the eastern half of our country, most will go directly to Florida, while west of the Mississippi the snowbirds will disperse anywhere between Southern California and the Texas Gulf Coast. And although we live in a vast and open country, it doesn’t feel that way when millions of RV snowbirds pack into the few warm winter climate zones on the continent during fall and winter. 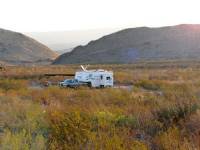 For example, Florida is one of the most crowded winter RVing destinations my husband and I have ever visited. Not only do RV parks cram winter guests in like sardines, but they charge exorbitant rates just for the privilege of being a temporary resident in the Sunshine State. We are not fans of snowbirding in Florida but if you prefer urban amenities, a tight-knit community (literally) and don’t mind living ten feet away from your neighbor’s sewer connection for a few months out of the year, then Florida might be the place for you.

Every winter since our first and only disastrous Florida experience, we’ve opted to spend cold months in the Southwest, where RV parks are still busy but at least we have the option of camping on expansive stretches of public lands that are non-existent outside of the West. The best part? RV snowbird camping in the west is cheap and often free, which saves us hundreds of dollars each month on rent.

But this type of snowbirding isn’t for everyone. As with anything there’s a price we pay for the living on the cheap. For example, we are extremely careful about our water consumption, since our Arctic Fox fifth wheel only holds 56 gallons of fresh water. In addition, we had to spend a few thousand dollars on a workhorse solar system that would enable us to work online while boondocking;  but thankfully it’s already paid for itself by helping us avoid RV park rent over the last seven winters.

Despite the small sacrifices we make to spend winter on public lands, we believe it’s all worthwhile. Not only do we enjoy starry nights and no congestion but the solitude lets us hunker down and get lots of income-generating work done from our laptops.

Keep in mind that camping in the west isn’t always the best place to get away from it all. Two of the most popular snowbird destinations we visit are busy and chaotic – but a whole lot of fun. I’ll tell you all about them in my next two blog posts, so stay tuned!