You are here: Home / Blog / The Full-Timing Nomad: You Know You’re In a Trailer Park When . . .
This post may contain affiliate links or mention our own products, please check out our disclosure policy here. 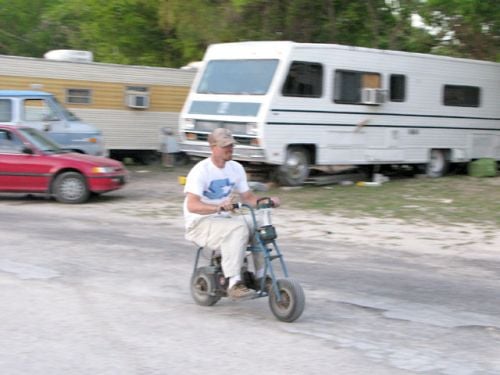 Let’s not mince words, in the recreational vehicle community, there are trailer parks and there are RV parks. There are homes with wheels that never turn, and there are homes that don’t stay in one place more than a few weeks. And finally, there’s a big difference between people who live full-time in a RV, as opposed to full-time RVers. All of these nuances became very apparent to us when we recently needed some help during a hot afternoon in Texas.

Last month while temporarily staying in a cheap trailer park set alongside a pretty river, we accidentally left the key in our Dodge truck’s ignition system in the “on” position overnight and killed the batteries. My first instinct was to ask our neighbor, the park manager, if we could have a jump start from his heavy-duty Dodge pickup. When we approached to ask for this big favor he refused, and made it clear that he “couldn’t” help because he doesn’t ever use his precious Dodge to jump start another vehicle under any circumstances.

My husband and I were dumbstruck. Every other RVer we’ve met wouldn’t hesitate to offer help during a crisis like this. It’s the unspoken rule of the road, you spread the love to other RVers by helping out when someone needs it.

After walking away shaking our heads in disbelief, it occurred to us; the park manager isn’t a full-timer, he’s just a guy who happens to live a trailer. He’s never gone full-timing so he has no idea about the real camaraderie that occurs between vagabonding RVers who occasionally find themselves in a bad situation.

Through the years we’ve learned that RVers are some of the friendliest people around. Whether it’s an old guy in a powder blue jumpsuit or a vacationing family, real RVers will jump in to assist because they understand what it’s like to be stuck in a bad situation with your home in tow.

If you’re a full-time RVer and don’t stay in one place very long, be sure to look around at the license plates on the RVs and vehicles in the park you check into. If most of fellow resident’s license plates are titled in the same state, chances are you’re going to be surrounded by permanent residents, many of which may not be as sympathetic to your plight should you need assistance. If you see piles of junk sitting outside the RVs, or rigs that look like they haven’t moved for a decade, you may want to opt out and choose a park where you have more in common with its temporary residents.

Sometimes you just shouldn’t choose a park on price alone; it’s often the people who help create memories that make for an adventurous full-timing lifestyle, not necessarily the location or the activities you pursue while you’re there. The next time we decide to camp somewhere for more than a couple of weeks, I’ll be sure to pick a park that appears to have full-timing residents from all across the nation. It’s far better to surround yourself with mutually-beneficial relationships of support and camaraderie than trailer park neighbors who haven’t evolved past the dog-eat-dog mentality of a traditional default life.