You are here: Home / Blog / The Silver Gypsy: A Hobo Stew Gathering
This post may contain affiliate links or mention our own products, please check out our disclosure policy here.

by Sharlene Minshall - The Silver Gypsy
April 23, 2014Filed under: 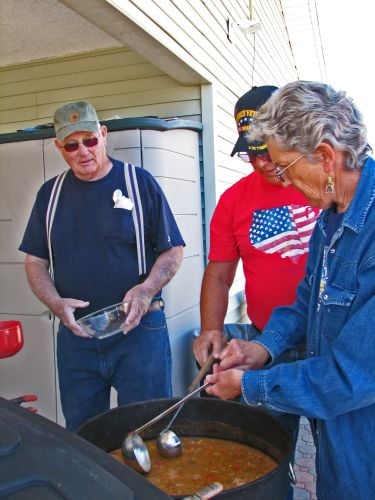 The instructions were explicit, as they were last year at this time, “bring your chair, bowl, plate, drink, and eatin’ tools.  We’ll do the cooking!”  This year Hobo Stew Day landed on April Fool’s Day so the hosts had to remind people several times that this gathering was not a joke.  Unfortunately, the timing conflicted with our annual Bead Week and several other local activities so fewer people attended.  They came by car, on foot, golf carts, and four-wheelers, and everybody knows, where there is food, there are Escapees.  The weather was cooler than last year and a soft breeze blew on the hot soup so we could gobble it down more comfortably. 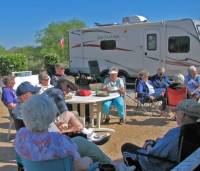 Our hosts, Mark & Kathy Guidry, and other North Ranch friends, Paul and Kay Ernst, were celebrating their 48th wedding anniversaries.  It was a grand excuse for inviting all of North Ranch to share their wedding day antics and our usual glorious desert days. 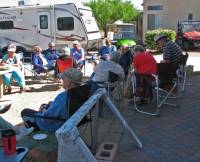 As we did last year, everyone had brought ahead of time, a can of something to add to the Guidry stew.  A few people brought desserts or something to go along with the stew, in my case, my version of cheesy bread.   Along with the soup pot contribution, we also took non-perishable foods for our local food bank. That is a great idea if you are having a gathering of any kind.

With all of these people being current or former RVers, and Escapees as well, hugs were rampant and stories were funny, sad, and sometimes even helpful.  Laughter boiled over as we ate together and enjoyed each other until the big pot was down to the dregs, the last cheesy bread was munched, and we at last folded our chairs, “until we meet again.”

I wish you many warm-hearted gatherings.  God Bless until next week.