You are here: Home / Blog / The Silver Gypsy: The Great Amazon River Raft Race
This post may contain affiliate links or mention our own products, please check out our disclosure policy here.

by Sharlene Minshall - The Silver Gypsy
November 27, 2013Filed under: 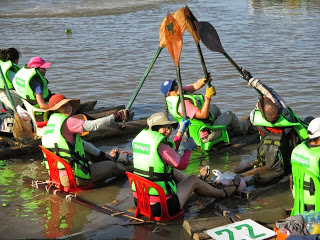 My 25-year old Granddaughter graduated Western Washington University, taught for a year, and last year started a major adventure as a Peace Corps volunteer in Peru.  While she is there and free from her Peace Corps duties, Becca is taking advantage of activities and places she has not previously experienced.  This time she and a crew of three friends/volunteers signed up for the Great Amazon River Raft Race, a three-day, 112-mile race.

Becca, Gia, Jeannie, and Lyndsey named their crew, “Mamacitas Feroces” or the “Ferocious Little Mamas.”  They were given eight large logs, rope, saws, nails, hammer, and a five-hour time span for building their own rafts.  They were allowed to contract workers who had chainsaws and other tools for building the boat and were required to use all eight logs.  With an hour to spare, the raft was completed. 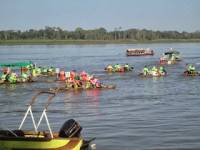 After a night of bugs, hot tents, and hard ground, race day was upon them and she suddenly realized they were about to embark on a three-day race on one of the most dangerous rivers in the world.  They awakened early and were one of the first teams to put their raft in the water. As the start whistle blew, the girls paddled hard, by chance at the front of the pack. As they paddled, they could hear the press and extra staff cheering for the Mamacitas Feroces.  Their boat was considered “The Party Boat.”  The girls laughed.

They took breaks of five minutes or less for water, snacks, or sunscreen but always with at least two people paddling.  When nature called, they were thankful for a raft that sat low in the water.

The competition was three days long, including sleeping in tents in different jungle communities each night.  At the end of each day of rowing, they went ashore with all of their gear. Each afternoon and evening, they scarfed down a giant meal, mainly meat, which they referred to as “eating the farm.” 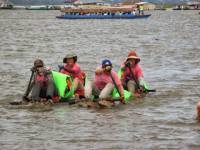 On the final hours of the last day, they felt good.  Then an unexpected sandbar beached their steadily sinking ship.  Ten minutes lost as they freed their raft. Thirty minutes later, they were caught in a fishing net. They freed themselves again and in the last minutes, the girls chanted “strong and beautiful and powerful” all the way to the finish line.

Though Becca knew that the Mamacitas had done well, it wasn’t until they were called that she realized they had won second place in the women’s division. She stood in front of a screaming crowd with her teammates as they were presented with necklaces, key chains, and a big, beautiful trophy. 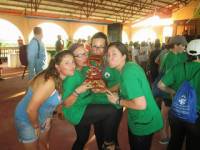 And I thought canoeing the Yukon River was a big deal!   My hair just turned white!  If you want to follow her precise adventure, go to http://beccapcinperu.blogspot.com/   Happy Thanksgiving and God Bless until next week.