You are here: Home / Top Stories / They Ain’t Feelin’ No Pain
This post may contain affiliate links or mention our own products, please check out our disclosure policy here. 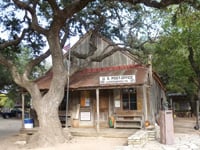 Those are a couple of lines from the 1977 hit country song, “Luckenbach, Texas,” subtitled “Back to the Basics of Love.”  The song made Luckenbach famous, and a popular destination for travelers and locals.  Although no one lives in Luckenbach any longer (even though a sign on one of its buildings declares, “Population 3”), this onetime trading post remains a magnet for those in search of country music, dancing, knocking back a couple of cold long necks (as in beer), and just having a good time.

First-time visitors to Luckenbach expecting to find a town are likely to feel they are viewing some kind of apparition. Glance toward the general store and you expect to see Paul Newman dressed as Judge Roy Bean holding court and getting ready to dispense “law west of the Pecos.”  Or you might envision the climactic scene of the movie “Close Encounters of the Third Kind” rewritten to have Richard Dreyfuss enjoy a couple of cold ones and listen to some guitar picking before boarding the mother ship.  Luckenbach is a mystical kind of place. 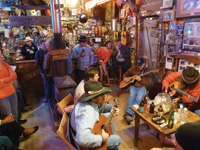 It was founded near Fredericksburg in the Texas Hill Country by German immigrants in 1849 and initially was called South Grape Creek Community. It became Luckenbach in 1866 when one of the settlers applied for reestablishment of a post office and used her fiancé’s name on the application. The community of Luckenbach remained in the same family until 1970 when it was sold to a trio of Texans, one of whom proclaimed himself mayor. The settlement was never really much of a town, although at one time it included a post office, school, community hall, general store, blacksmith shop, and a steam-powered cotton gin. Most of these are now gone. The school closed in 1964 and a flood took out the old cotton gin and blacksmith shop in 2002. The post office closed in 1970 when Benno Engel, a descendant of Luckenbach’s founders, retired as postmaster.  Chickens continue to strut around the place, but it is doubtful they are from the family tree of those raised by the original settlers.

Things picked up in the early 1970s when the dance hall served as the location for songwriter and singer Jerry Jeff Walker and the Lost Gonzo Band to record the album “Viva Terlingua.”  Four years later the real boom arrived when Bobby Emmons and Chips Moman penned the hamlet’s namesake song that was recorded by Waylon Jennings and Willie Nelson.

Today Luckenbach is a venue for beer and country music.  Although much of the original community is history, the really important components of the settlement—general store, saloon and dance hall—remain. Stacks of T-shirts, sweats, key chains, bumper stickers, and lots of other Luckenbach memorabilia are offered for sale in the general store.  However, it’s music and atmosphere that draw the faithful. Step down into the saloon and you might expect to find Waylon and Willie sitting around a circle picking guitars and singing along with the boys.  Although Waylon passed away in 2002 and Willie hasn’t visited for some time, their spirit lives on here.  Maybe it’s time to sell your diamond rings and buy some boots and faded jeans, and go away to Luckenbach, where there ain’t nobody feelin’ no pain.

David and Kay Scott reside in Valdosta, Georgia, and are authors of Complete Guide to the National Park Lodges.  Visit them at mypages.valdosta.edu/dlscott/Scott.html.