You are here: Home / Maintenance, Modifications and Repairs / Transynd Fluid and Allison Spin-On Filter Change
This post may contain affiliate links or mention our own products, please check out our disclosure policy here. 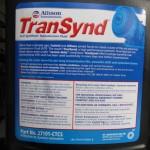 When we first bought our motorhome in 2003, the Allison LCT1000 came equipped with Dexron III. I never thought much about the fluid however I shortly became aware of synthetic transmission fluid. The first change that I made was using Amsoil Torque Shift and I changed the control (external) filter. This was sometime during 2004. In 2005 I did the second change and that was done in Hartford, Connecticut. At the time of the 2nd change I had approximately 18,000 miles. Now since 2005, I’ve been running the same load of synthetic fluid in my transmission oblivious to the fact that the fluid does have a change interval that is keyed on time.

The Allison Transynd fluid replacement schedule is 150,000 miles OR 4,000 hours OR 48 months whichever comes first. I show 93,000+ miles on my odometer and I had not given the 48 month part of the equation much consideration however after having spoken with an Allison representative, I became all too aware of the 48 month rule which I exceeded by about 13 months. Fortunately for me our traveling schedule was greatly reduced in 2010 however time marches on.

I recently traveled to Madison, Wisconsin in our toad for the FMCA 86th Family Reunion and as expected one of the vendors there was an Allison dealer. Without thinking too hard about it, I purchased 3 gallons of Transynd ($109.77) and took it to go! I spoke with the Allison rep there as well and he told me that most often folks forget about the 48 month rule. 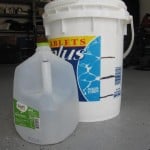 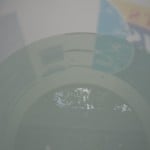 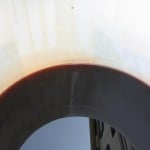 1. Find a suitable container and mark off the gallon marks.
2. 3 gallons of water were used to make marks which are scribed on the outside of the bucket.
3. Total contents of transmission were just short of the 3 gallon mark. The 3 gallon mark is just visible.

In the Workhorse Chassis Guide, the pan off capacity of the 1000 is stated at 10.6 quarts and the control filter takes about ¼ of a quart. Doing the math, 10.85 quarts ought to do it nicely however as the vehicle sits there the fluid drains back into the pan from the coolers. Since my motorhome hasn’t moved in over a month I was confident that whatever fluid could drain back certainly did.

What I was concerned about was measuring how much fluid came out of the transmission. The thought here was to replace the same quantity that I took out however I did not want to buy a 4th gallon of Transynd for just a small quantity of fluid. My strategy was going to allow the transmission to drain and then restore the drain plug at the 3 gallon mark. In order for this to happen I needed a large capacity container that was marked. I went to my shed and rinsed out an old chlorine bucket that was used for pool tablets. This container would hold I expect about 5 gallons. I found a marked 2 quart container, filled and measured off 1 gallon on a milk jug. I took the gallon and began filling the bucket with water. Using a magic marker I marked off each 1 gallon graduation up to 3 gallons.

I placed my jack pads down and raised the motorhome up as far as it would go. I took the bucket and a 15mm – 3/8 drive socket and ratchet and crawled under the motorhome. I removed the plug and began draining the fluid. A good steady stream flowed into the bucket as I watched the level rise. First it passed the 1 gallon mark and then the second and the stream continued pretty strong up close to the 3 gallon mark when it slowed. Coming to a trickle, I allowed the fluid to drain for about another hour or so. The amount of fluid that I collected approached the 3 gallon mark but it stopped short. I estimate that the level stopped about ½ to 1/3 of a quart short of the 3 gallon mark. 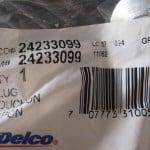 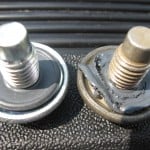 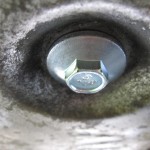 I saw this as excellent news knowing that I have enough new fluid to do the job. A couple of years ago Oemy came to the Workhorse Club rally that I hosted at Ocean Lakes in Myrtle Beach and at that time I got a control filter and an 8 ounce bottle of Fleetrite TES-295. This was back in October of 2009. I had thought about changing my fluid and filter since 2009 and here we are in August of 2011 and I am just now getting it done.

Now let me tell you about the drain plug. When I removed the drain plug and held it in my hand I observed that the neoprene gasket at the head of the plug was torn about a third of the way around or so. I’m saying to myself, this is not a good thing since I can’t possibly use this plug again. Knowing that the closest Allison service center is about 100 miles from here I thought why not call my local Chevrolet dealer. After speaking to the parts counter guy he came back and told me that he had a new Allison plug in stock and that he would put it aside for me. Great! I wouldn’t care if the thing cost $20 bucks at this point since the Chevy dealer was only about 3 to 4 miles from my house. The plug is GM Part Number 24233099 and it cost $6.78.

As soon as I returned home from the Chevy dealer I went under the rig and installed the new drain plug. Once it was snugged up, I tightened it about 1/3 to ½ more of a turn so it’s nice and tight but not too tight. I’m figuring; let the gasket do its job. Next to come off was the control filter. I first tried to budge it by hand but I knew right away that that was not going to work. Right on … forget it. I got up and retrieved my 2 inch nylon, ½ inch drive oil filter strap wrench. It’s the king of over tightened oil and fluid filters. Once the strap wrench was on there, a slight grunt got it moving and the filter started spinning off. The nipple on the filter base plate seemed to me to be a mile long as I continued to turn and turn and finally I got it off. Once the filter was off I saw that the magnet was diagonal on the nipple and it did not come off with the filter. The magnet looks for all intents like a small diameter 1 inch fender washer and it’s about 1/8th of an inch thick. 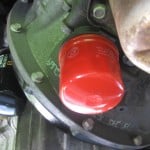 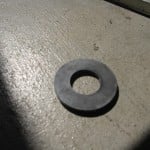 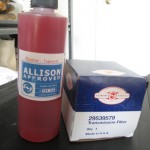 1. Old filter waiting to be removed.
2. Filter Magnet; Located on nipple between the filter and the base.
3. Oemy Fleetrite TES-295 fluid and new filter.

I struggled a bit, but I got the magnet off and inspected it. I did not see any residue or metallic particles on the magnet. That was an excellent outcome I thought. The magnet is then fitted to the base plate nipple and pushed up to the top of the baseplate. Once the magnet is in place it is held there by magnetism. I pre-charged the new Allison (29539579) filter by tilting and slowly adding fluid to the outside holes in the top of the filter. This assures that whatever oil is in the center of the filter has been filtered. I filled the can to about 90% capacity. The gasket being wet, I moved my finger around the circumference of the gasket. I positioned the filter up toward the baseplate and engaged the threads and snugged the filter. After the filter stops, you need to turn it 1 complete turn by hand and that’s it. I used a rag so the filter would not slip and continued 1 more full turn noting the print on the filter case. I finished up by wiping the filter case and that was that.

Finished and ready to come out from under the vehicle, I pushed out the open pail, old filter, wrenches and rags. At this point I am ready to begin filling the transmission. The challenge here is that the transmission dipstick fill tube is at such a shallow angle that you need a funnel that has a flexible tube that can be inserted in the fill tube. I just so happened to have one. The funnel I used is made out of plastic and has about a 32 ounce capacity and a fine mesh screen on the bottom of the funnel. A clear plastic tube is fitted on the funnel which has about a ½” ID. If you are looking for this type of funnel, it’s inexpensive and is available at the Walmart. 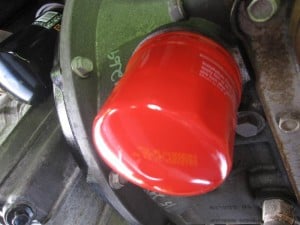 Having a funnel is essential however even with the best funnels unless the neck can completely come out of the engine compartment, you cannot easily add fluid from a gallon container. My solution was to get a more manageable smaller bottle. I used a clear 1 liter water bottle after it was dried out. What I did was transfer from the gallon and partially fill a liter bottle some 12 times. Good exercise I thought and I didn’t spill any except for a few drops from the funnel I used to fill the liter bottle. I added just about 11 quarts of fluid when I figured that I would be good to start the engine. I stuck the dipstick into the transmission to check the fluid and although there was fluid on the stick, this was a useless gesture since the level was way past the “hot” mark. I left the dip stick in place and went inside and started the engine. I quickly went outside and checked underneath the rig for leaks and there were none. I went around to the driver’s side and got underneath and checked the filter and it was dry.

I ran the engine for about 30 or more minutes until the engine was indicating about 195 to 200 degrees. The TFT (transmission fluid temperature) was nearing 140 degrees at this point and well within operational temperatures. With the motorhome level and in park, I began checking the fluid level. It was difficult to get the fluid to give me a line on the dipstick so I kept sticking and checking. After about 20 more minutes, I finally got a got a line on the dipstick I could see. The fluid and dipstick were now getting “hot” and I could see that the level was right in the middle between the cold and hot hash marks. I elected to add an additional 1/3 of a quart and I checked the level again. The fluid level was now into the “hot” hash marks and I figured that this was right where the level needed to be. There is no need to fill the transmission to the top of the hash marks. Do not overfill is rule #1. I estimate that I added 11 1/3 quarts of Transynd all together. I have approximately 2/3s of a quart of fluid left over that will probably last me until the next ice age. 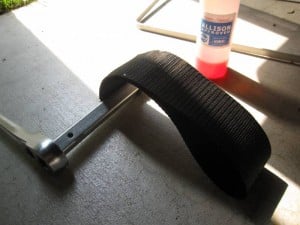 I made an entry in my service records for a fluid change at 93,155.7 miles, I am good to go for another 4 years. In all, this is my 3rd fluid and filter change on my transmission. You can do this; just take your time and don’t rush it.

Thank you for reading and offering your comments and ratings. Please keep them coming folks!

I am providing answers to questions back in the original discussion
in the Workhorse Custom Chassis Motorhome Forum located:. –> HERE<–