You are here: Home / RV Lifestyle / These Guys Chased A Dream Through Europe In A Van
This post may contain affiliate links or mention our own products, please check out our disclosure policy here. 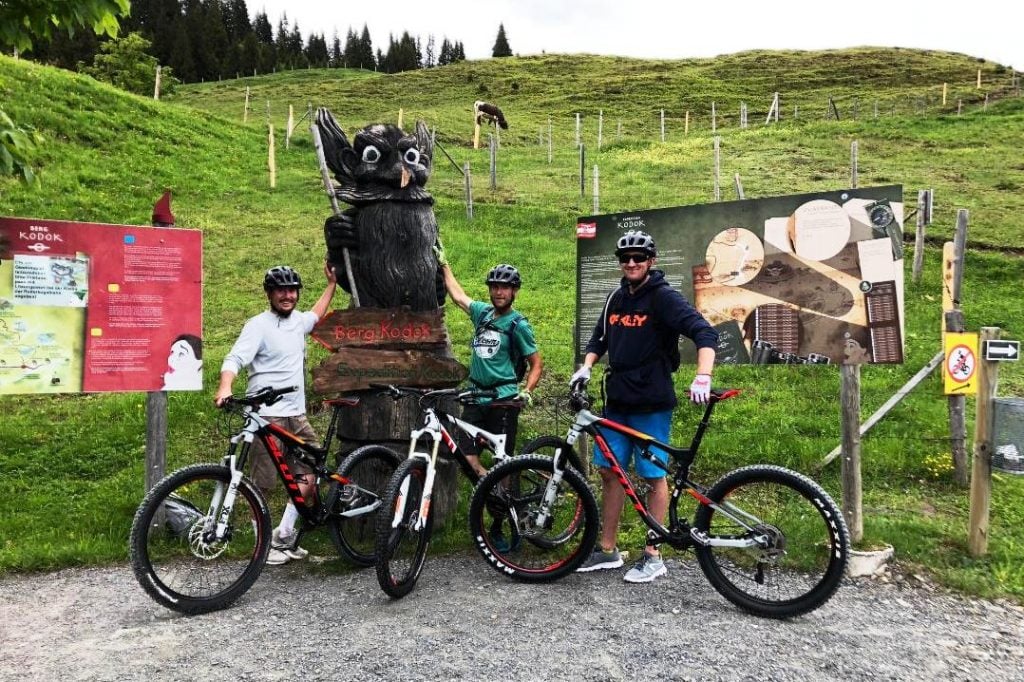 These Guys Chased A Dream Through Europe In A Van

Childhood friends Sean Nichols, Matt Ryan, and Josh Staley grew up racing motocross. Recently the three friends traveled from the US to Europe, rented a van, and spent a month preparing for one of their long-time dreams—to race in what is considered to be the hardest motorcycle race of its kind, the Erzberg Rodeo.

The Erzberg is a 4-day hard enduro event held annually at the Erzberg iron quarry in central Austria, culminating in the Red Bull Hare Scramble where the qualifying elite racers from around the world compete.

Because of their tight budget, the trio decided that the least expensive way to travel and train for the event would be to rent a cargo van for about $40/day that would triple duty as their transportation, lodging, and mechanic shop.  After flying to Munich, they rented a diesel Ford Transit and began filling it with the equipment they would need for a month of training. 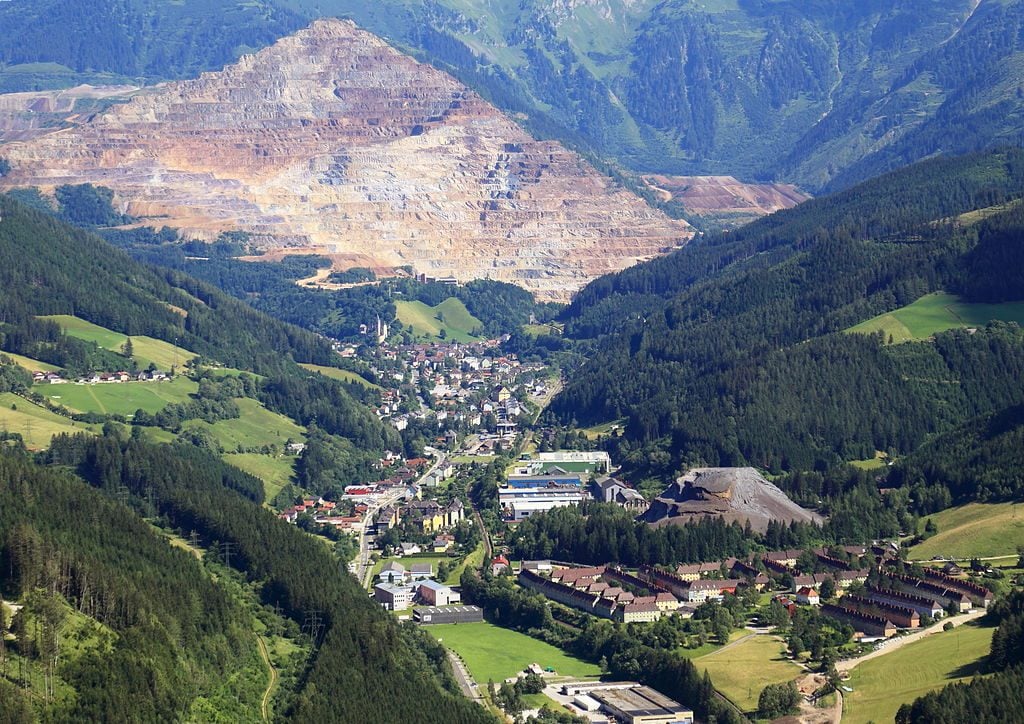 The Erzberg Iron Quarry in Eisenerz, Austria (Photo via Wikipedia)

Van life with a motorcycle

They purchased a KTM and rented 2 Husqvarna motorcycles, which all rode in the van with 3 mountain bikes, gear, food, tools, and the three men.

At a sporting goods store, they purchased an air mattress (but not a pump) and three “zero-degree” sleeping bags.  Quickly they were reminded that in Europe, “zero-degree” is in Celsius and they were a bit more chilly than they had expected.

Interestingly, they discovered that it is not easy to find ways to keep food cool in Europe.  Coolers and ice are not readily available, so they ate a lot of non-perishable food. 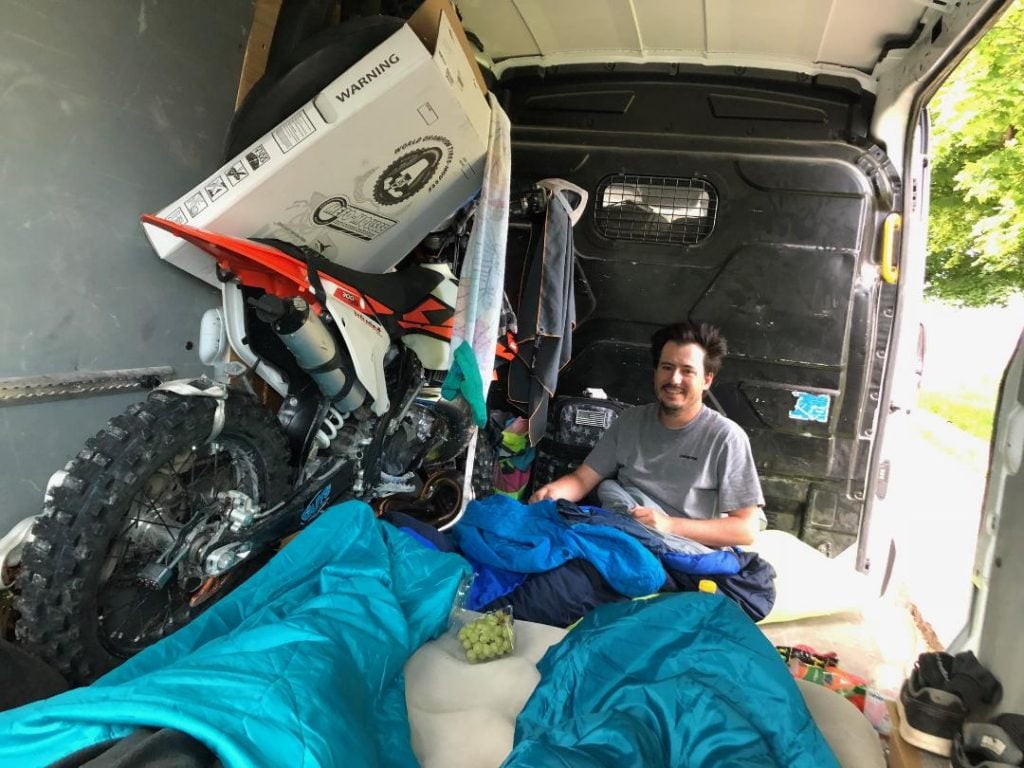 An RV trip through Europe

They spent two weeks traveling through Germany and then a week in Austria to find places to train and explore.  Unlike North America, they found that areas for public parking or camping are few and far between.  At one point, while touring Mozart’s birthplace in Salzburg Austria, they returned to where they left the van to find that the van (with all their bikes and gear) had been towed and impounded.

New “no parking” signs had been erected by a bus transit line in the time they had been on the tour.  Rather than paying to ride the bus (from the company that towed the van) to the impound lot, the friends elected to walk the 8 miles to retrieve the van.  Fortunately, they found that nothing had been stolen.

Three adult men with 3 motorcycles, 3 mountain bikes, a pile of tools, and riding gear that needed to be aired out made for extremely “cozy” accommodations in the van.  Without an air pump, they had to take turns blowing up the air mattress to sleep on, putting their lungs through their own workout. 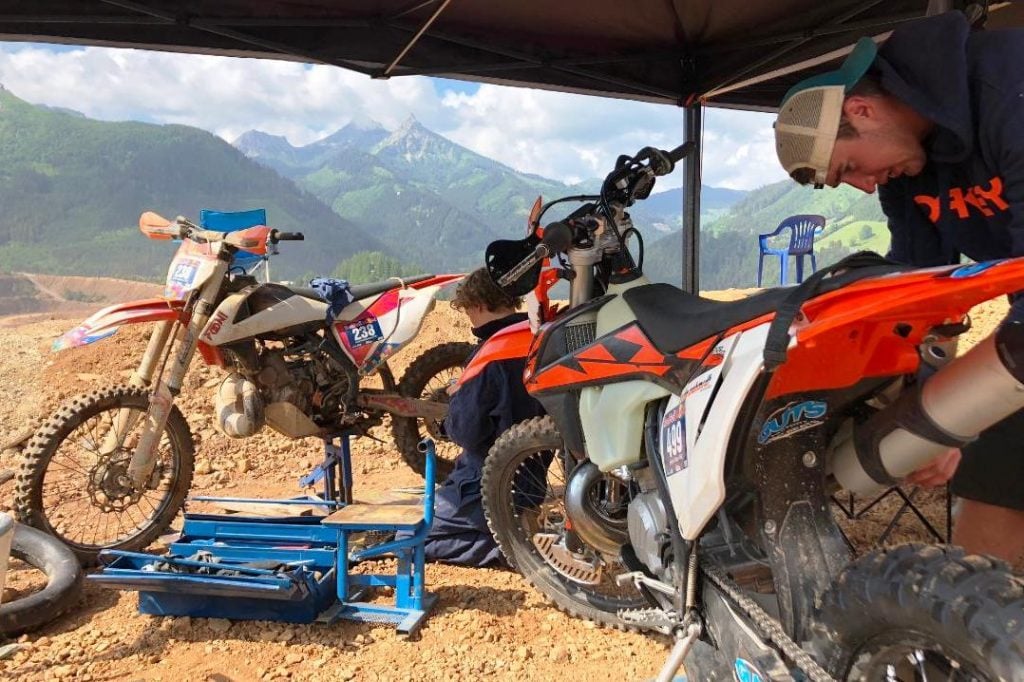 The most valuable of all the tools the trio had during the trip was a trusty pocket knife that was used for everything from opening cans to spreading peanut butter or tightening loose screws.  Through it all, and despite the limited bathing opportunities, the friendships remained steadfast!  And finally, it was time for the Erzberg Rodeo. 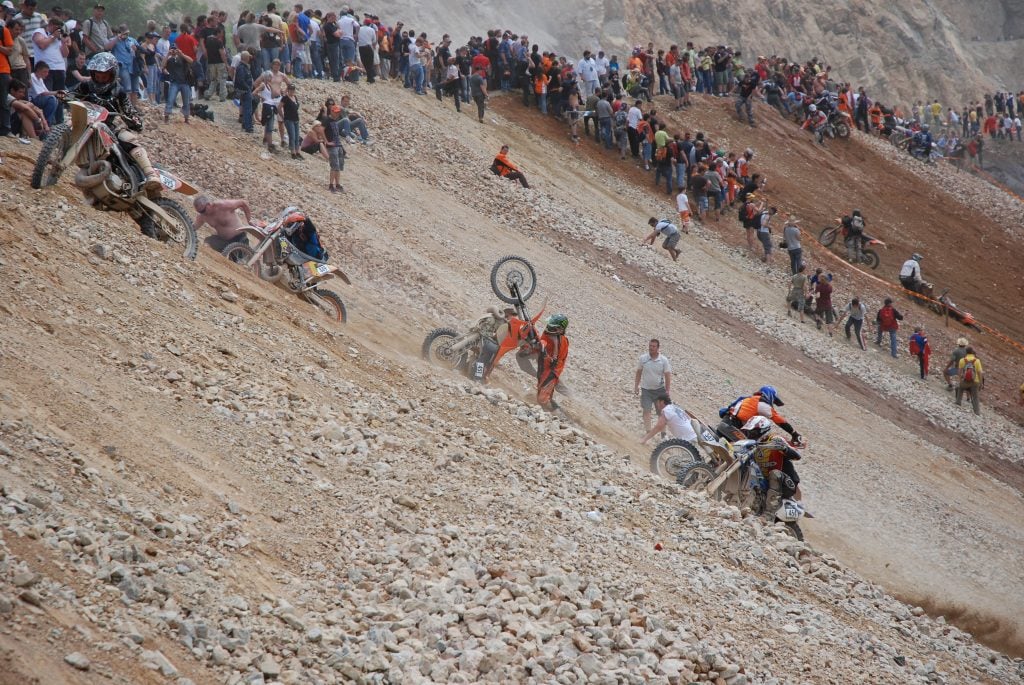 Over the course of the 4-day event, the 2,000 riders that initially entered whittled down to 500 riders that made it through the qualifying rounds to start the Hare Scramble race.

The route of the race changes each year but is roughly 22 wicked miles long with 23 different checkpoints and four hours to finish.  Of the 500 riders starting—including Josh—only 23 riders made it through the entire brutal course to the finish line.

Josh had an impressive rookie run and made it to the Burping Stones Checkpoint (#17), putting him in 96th place overall, and the 2nd of the American riders.

The three friends returned to the states, eager to get back to work to save up for the next adventure—a trip to Romania for a much longer hard enduro event!

For tips on RVing with a motorcycle, check out our previous article, RVs And Motorcycles: A Perfect Pair For Adventure Lovers.