You are here: Home / Blog / The 19th Hole: Great Stocking Stuffer: Frogger’s BrushPro
This post may contain affiliate links or mention our own products, please check out our disclosure policy here.

by Rick Stedman
December 3, 2011Filed under: 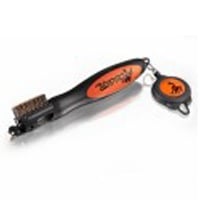 t few years, the BrushPro club head cleaner by Frogger has been one of the fastest growing products in the golf industry. It will make a great stocking stuffer!

“I started working on concepts of this business plan in 2005,” says company CEO and founder Jeremiah Bohannon. “Since my name is Jeremiah, I got inspiration from the Three Dog Night song from the 1970s “Jeremiah Was a Bullfrog.”  Thus the company name of Frogger.”

Since introducing the BrushPro, the Frogger concept has expanded to several other products as well, including the Amphibian Towel, Amphibian Ball Towel, the BrushPro Plus 2-IN-1 shoe cleaner, and the HOP divot tool and ball marker. “In coming up with this idea of a club cleaner, I wanted to address areas in golf I felt could use improvement, and that I could develop,” Bohannon explains.

What Frogger does offer are sound and useful golf products that make the game a little more pleasant.  The BrushPro keeps clubs clean and sharp, thus increasing backspin, providing more control and distance. The useful tool comes with a large handle and retractable lanyard, thus it’s always right at your fingertips. Its dual-layer brush head bristles are made of nylon and bronze that help remove troublesome dirt and other debris on the club face.

A natural partner to the BrushPro is the Frogger Amphibian Towel, which offers a simultaneously wet and dry side. This very functional towel combines a bamboo terry exterior and a jacquard interior, thus doing the work of one towel when two or three were previously needed. The Amphibian Towel is constructed like a large pocket; the intention is to leave the exterior of the  towel dry, while keeping the inside wet for getting the caked-on grime off your clubs. On a rainy day, for example, you simply reverse the process, keeping the inside of the towel dry and usable. A waterproof layer keeps the two different towel materials dry.