You are here: Home / Top Stories / A Quiet Haven on Mexico’s Coast
This post may contain affiliate links or mention our own products, please check out our disclosure policy here. 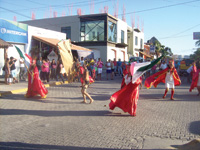 San Patricio Melaque, Jalisco, Mexico. Six years ago I had never heard of the place. It is a well-kept secret of the Canadian and American snowbirds who have discovered this little piece of paradise only a five-hour drive south of Puerto Vallarta and 45 minutes north of the industrial port of Manzanillo.

Melaque is actually a conglomeration of three beach towns that have grown into each other: San Patricio, Villa Obregon and Melaque itself. Adjacent on the bay is the charming fishing town of Barra Navidad. Barra is also known for its quaint streets, good restaurants and its expensive five-star resort, the Grande Bay. The resort is on the other side of the harbor entrance, accessible by water taxi. Its isolation by water protects Barra somewhat from the high-class crowd.

It is hard to define what makes Melaque so different. I have traveled by RV over much of Mexico and have never found a beach town with quite this combination. In winter, Melaque is full of Gringos. In fact, I sometimes wonder if they outnumber residents. However, it has none of the Gringo feel that places like Cabo, Cancun or Puerto Vallarta have. It is still, well, very Mexican. Maybe it’s the lack of all-inclusive hotels and resorts that helps make the town so appealing to those looking to spend winter in quiet warmth, free of the party crowd and time-share salesmen. Small inexpensive hotels with kitchenettes and pools are the norm, and can be had for $30 to $90 per night, with much cheaper monthly rates. There are lots of them to choose from. The town is easily reached by taxi from Manzanillo airport, which is only 30 miles away. Many Gringos spend all winter here. Many also come here for dental work. English speaking Dr. Woo (his grandmother was Chinese) and his son, do excellent work, including implants. Dr. Woo is also an accomplished singer and you are quite likely to find him performing at a local restaurant on a Saturday night.

Melaque is a great place for an RV. There are several RV parks. Unfortunately, the one downtown was halved in size over the last year, and the popular Laguna del Tule at the south end of town is often booked up a year in advance from November through February. Fortunately it is in the process of adding another 20 sites, which may be ready for the 2015 season. There are also other options. There is a large new French Canadian RV park at the northwest end of town, which is locally referred to as the “French Quarter.” This one caters largely to caravans from Quebec, but also welcomes individual travelers, English or French.  A new sizable RV park, the Melaque Paradise, just opened last year at the southeast corner of town (five blocks off the beach). At the far northwest end of town is the “almost free” campground, which is largely a boondocking site for the cheapskates among us. The sanitation situation there is debateable, but when I checked it out last year, the campground was full. There are a few small parks catering to only two or three rigs. There are also several inexpensive RV parks at nearby La Manzanilla and Boca Beach, just to the north, not all of those have full hookups.

At Caravanas de Mexico, where I work, we have added a couple of weeks in Melaque to our RV caravan schedule. The spectacular new Mazatlan-Durango Toll highway, which opened in late 2013, has made a circle route possible from the west, making it easier to explore some interior Colonial Cities, if you wish to add some history to your trip.

Whales and Pelicans
Melaque is blessed with a beautiful long curving beach. It is not unusual to see humpback whales breaching just off shore in early spring. At the south end, near the Laguna del Tule, it can be dangerous to swim at times, as breakers tend to break at the shoreline, which drops off rapidly. That does not stop young boys from skim boarding in the surf. In fact there is an annual skim boarding competition (Mexico’s largest) in late February/early March. As you move farther south along the beach toward Barra Navidad, it becomes rougher and you can actually surf for real.

The north end is sheltered, shallow, calm and suitable for young children. It is also the home of several beach restaurants. You can see hundreds of pelicans perched on the small fishing boats anchored offshore. At the other end of town is a very large freshwater lagoon, Laguna del Tule, which is a paradise for bird watchers. Just be wary of the caimans that also inhabit this lagoon. Locals claim there are over 100, some as large as 12 feet.

Melaque was hit very hard by a hurricane in the fall of 2011, but it was almost back to normal by spring 2012, thanks in no small part to generous donations from the Canadians and Americans who call this quiet town their winter home.

Did I just say quiet? Well, the one exception is in the week leading up to St Patrick’s Day. St Patrick is the patron saint of Melaque, hence the full name, San Patricio de Melaque. This is one of the more entertaining festivals in Mexico, complete with one of the wildest fireworks celebrations in Mexico.

In the meantime for those wanting some action, there are a few bars in town, including a popular transvestite bar with entertainment on Friday nights. You will usually find it packed with retired Gringos who would never be caught patronizing one at home. It is all good fun, and an opportunity to get some good blackmail photos of your friends on stage dancing with the “ladies.”

Pottery Center
Melaque is known for its ceramics, and after five years of spending winters there, actually so is my house. My favorite store is a small hole-in-the-wall operated by the hard working Antonio Dejesus Velez and his wife, Virginia Tenovio Castro. They can be seen out on the sidewalk daily, painting ceramics. They have become almost like family to us, and we receive a warm welcome from them every year when we first arrive.

Many small excellent restaurants are scattered through the town. A favorite of mine is the Salamandra in Villa Obregon. This restaurant is only open half the week, but has excellent food, albeit pricey. A former taco stand, Scooby’s, has become famous for its Sunday night prime rib. It moved to larger quarters this year. Two years ago my Mexican rescue dog, Tomas, spent Happy Hour in one downtown Melaque restaurant sipping a Margarita. Only in Mexico.

Melaque does have its dark side. The popularity of the town among ex-pats and long-term visitors has inevitably attracted some undesirables. There have been two murders of Gringos in the last several years. There have also been some instances of vehicle theft and a robbery or two. The town has responded by reinstating the presence of the tourist police, who were noticeably absent over the last few years. However, as with all negative news regarding Mexico, one has to keep things in perspective. There are no nut cases shooting up elementary schools or movie theaters, and Mexico’s drug war seems far away. As in most cases, those who find themselves in trouble often have participated in risky behavior.

My only hope is that time does not soon catch up with this town. I suspect Manzanillo will soon find itself on the tourist route, now that its ugly, smoke-belching, power plant is being mothballed. It will be hard to keep development from spreading northward, as it has done in Puerto Vallarta. Hopefully it won’t happen in my lifetime.

Once you experience Melaque, chances are it will become a 20-year love affair, as it has for many Canadians and Americans.

Paul Beddows is past president of NATCOA, the North American Truck Camper Association, and works for Caravanas de Mexico RV Tours (mexicorvcaravan.com). He may be reached at paul@natcoa.com.

HOW TO GET THERE:
If you are coming in an RV, you might want to avoid the nightmare of driving through Puerto Vallarta. You can take the toll highway (15 D) to just short of Guadalajara, following the signs to Tala (Highway 70), then south on the new four-lane Highway 601 to join Highway 80, then southwest to Melaque. (This is not recommended for large rigs)  Alternatively you can follow the same route via Tala and then north on Highway 80 to join toll Highway 54 D. Take that south through Colima, on to Manzanillo, then north to Melaque. Both routes bypass Guadalajara and Manzanillo itself. If you choose to fly, Manzanillo Airport is only a $20 taxi ride away. It is serviced by US Airways, Alaska and Westjet from the western U.S. and Canada. You can also take a bus from Puerto Vallarta (five hours).