You are here: Home / Top Stories / Are Bike Camper RVs Rolling Onto Roads Near You?
This post may contain affiliate links or mention our own products, please check out our disclosure policy here.

by Rene Agredano
October 2, 2016October 4, 2018Filed under:
Table of Contents show
Benefits of a bike camper
The lightbulb moment spawns a new RV
Things you can add to your DIY towable bike camper include:
See also: Check Out These Mobile Libraries Inspired By Teardrop Trailers

Pedal-powered bike camper RVs are popping up all over the internet as the “micro camping” movement gains speed. Fans of human-powered transportation are constantly inventing numerous ways to merge RV and bicycle technology into homes on wheels.

Most bike camper RVs are conceptual only, but one just went into production and another you can make yourself. 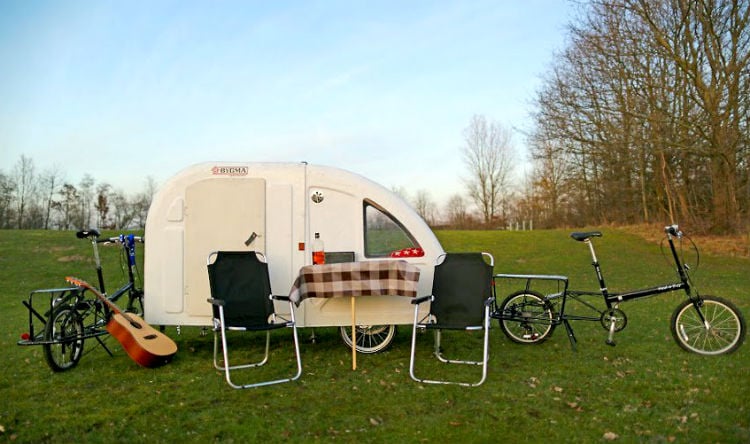 Will bike campers come to RV showrooms near you? Image: widepathcamper.com

Will more of these offbeat bike campers appear in RV showrooms near you? Or are they just a glamping fantasy? Let’s take a look at some features.

Similar to tiny house aficionados who live in towable homes under 500 square feet, micro camping with bicycles takes the concept one step further. These minimalist camping enthusiasts want even lighter homes to enjoy as practical shelters for outdoor adventures.

Benefits of a bike camper

One of the most well-known bike camper builders is Paul Elkins, an inventor from the Pacific Northwest. His Airstream-style bike camper is the cream of the crop of DIY micro-bike camper RVs.

Elkins first garnered Internet attention when his self-dubbed “Post-apocalyptic Burning Man bike camper” was spotted roaming the Black Rock Playa. His newest RV can be made by practically anyone, for just $150.

Elkin’s bike camper invention was purely accidental. One day while playing around with Coroplast, a heavy-duty plastic substrate commonly used by sign makers, he “discovered you could create a very lightweight, strong structure just attaching the panels together with zip ties,” says the inventor.

After scavenging up free campaign signs—normally scheduled for the landfill—Ehatlkins went to work. He used little more than:

The final product is a portable home on wheels that’s weather resistant and lightweight at just under 60 pounds.

Things you can add to your DIY towable bike camper include:

“For people who are adventurers and don’t mind pulling a little weight and taking their time traveling this would be a fun way to go,” says Elkins. Anyone who wants to give it a try can buy his bike camper RV plans at his website, ElkinsDIY.com.

As other inventors create similar towable homes for campers who tread lightly on the planet, it’s entirely possible that the marketplace for these tiny micro campers will grow larger than anyone ever expected.