You are here: Home / Blog / Book Review: Recapping the 1975 Masters
This post may contain affiliate links or mention our own products, please check out our disclosure policy here. 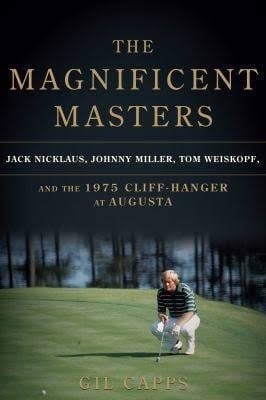 Looking back at historical moments in golf, the cream of the crop always rises to the top, especially during major tournaments, like the 1975 Masters. With the 80th edition of the Masters beginning April 7, a timely recap of that unforgettable tournament is thoughtfully examined within the covers of a 320-page book by Gil Capps – “The Magnificent Masters: Jack Nicklaus, Johnny Miller, Tom Weiskopf, and the 1975 Cliffhanger at Augusta.”

In the book’s introduction, the author shares that going into the 1975 Masters, these men – Nicklaus, Miller, and Weiskopf – were the top-three players in golf, and the three most talented. They had combined to win six of the 13 tournaments so far that year. Miller was first on the money list, followed closely by Nicklaus and Weiskopf.

Also, during the mid-1970s, and especially at the Masters, a veritable Hall of Fame list of competitors played on the PGA Tour. Several of those who gather that spring in Augusta, Georgia for the game’s most famous event, the Masters, included Arnold Palmer, Tom Watson, Gary Player, Lee Trevino, Hale Irwin, Billy Casper, and Sam Snead. But, it was Nicklaus, Miller, and Weiskopf who provided the drama during that tournament.

As if on cue, this trio summoned the best golf of their lives in the same major championship. Their back-and-forth battle would rivet the sporting world and dramatically culminate in one of the greatest finishes in golf history.

In The Magnificent Masters, Gil Capps, a veteran golf writer for more than two decades with NBC Sports and the Golf Channel, recaptures hole-by-hole, the thrilling drama of this singular event during golf’s golden era. He summarizes the media-crazed build-up and intertwined careers of the three combatants, as well as the tournament’s final dramatic putts that would change the game of golf forever.

An interesting side note in the book is the author’s explanation of Nicklaus’ influence on the focus on major tournaments, namely The Masters, U.S. Open, The Open Championship (British Open), and the PGA Championship. Capps shares that prior to Nicklaus, the majors weren’t really all that major, at least not in comparison with other tournaments throughout the year. Nicklaus determined that his own career would be measured not by the number of overall events he won, but instead by the number of majors at which he performed. Thus, he was the first golfer to focus his game on those four tournaments, and the story of his experiences at the 1975 is detailed richly by the author.

“The Magnificent Masters: Jack Nicklaus, Johnny Miller, Tom Weiskopf, and the 1975 Cliffhanger at Augusta” is available at all major booksellers.