You are here: Home / Campgrounds and RV Parks / Cigarette Smoking In Campgrounds Divides The RV Community
This post may contain affiliate links or mention our own products, please check out our disclosure policy here.

RVers share lots of common ground. But cigarette smoking in campgrounds splits the community down the middle every time. Whether you’re for it or not, it’s getting harder to light up a cigarette or cigar in campgrounds. 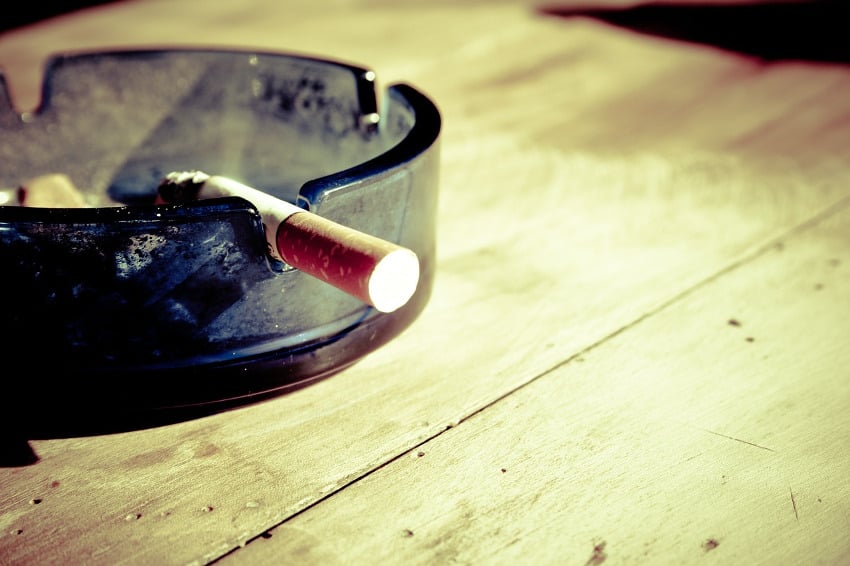 You may not be able to do this at your favorite campground. (Image: Pixabay)

Cigarette smoking in campgrounds is more restrictive than ever. Each year more campground smoking bans in RV parks become law. Many states also have clean air laws that restrict smoking in open spaces. Today, most smokers must keep their habit restricted to designated areas or face fines.

Sometimes the campground smoking bans are because of high wildfire danger, as in the case of Stage One Fire Restrictions in place each summer throughout Arizona’s Coconino and Kaibab National Forests. “For personal use of cigarette or other tobacco smoking medium when inside an enclosed vehicle or building, or in a developed recreational site in an area that is free of combustible materials and vegetation,” announced US Forest Service officials.

But most times, wildfire prevention tactics take a back seat to personal feelings about the subject. A good example is the “Observations about Camp Hosting” discussion in the iRV2 Discussion Forums. In it, an iRV2 member new to camp host work shared his observations about camp hosting. His feedback about people who enjoy smoking in campgrounds ignited passionate arguments for and against the activity.

Cigarette smokers seem to be sloppy campers. Invariably the sites that needed the most cleaning after campers have left were sites where there were smokers. — Observations about Camp Hosting

Of all the observations about camp hosting he shared, the above insights about smokers created the most passionate responses. 5D Canonman said “We too find that in general smokers tend to treat the whole outdoors as their personal ashtray,” while 96 Wideglide argued “Don’t lump everyone who smokes and/or drinks, into one group.”

Similar passionate responses about lighting up are in an iRV2 discussion about cigar smoking in campgrounds. This debate is filled with interesting reasons for and against the freedom to light up. In it, iRV2 member Cbones shares an incident at a campground. A next door neighbor asked he three cigar-smoking friends to put out their expensive cigars.

He stated that he likes to be able to camp with his windows open, and he should not have to smell our smoke. — Cigar Smoking

The incident lit up the discussion boards and evoked a ten page debate about cigars, cigarettes and personal freedom. In it, iRV2 member Blag bravely shared his own feelings. “I’m sure a lot of people like to go camping to get closer to nature and immerse themselves in the sensory side of it. The smell of cigar smoke drifting through the campsite doesn’t fit in that scene,” he said. In response, clyon51 retaliated with “The open air seems to be the only place one can smoke anymore, I’m certainly not giving up that right under any conditions.”

Every RVer will encounter a smoking neighbor at some point

Many others aren’t giving up their smoking habit either. The Centers for Disease Control (CDC) reports that “smoking has declined from nearly 21 of every 100 adults (20.9%) in 2005 to about 15 of every 100 adults (15.1%).”  Tobacco use is down, but the debate isn’t going away any time soon. “An estimated 36.5 million adults in the United States currently smoke cigarettes,” the CDC writes. Chances are good that every RVer will encounter a smoking neighbor at some point in their travels. How each situation is handled by both parties determines the cohesiveness or division of the community itself.