You are here: Home / Top Stories / Evergreen Aviation & Space Museum
This post may contain affiliate links or mention our own products, please check out our disclosure policy here. 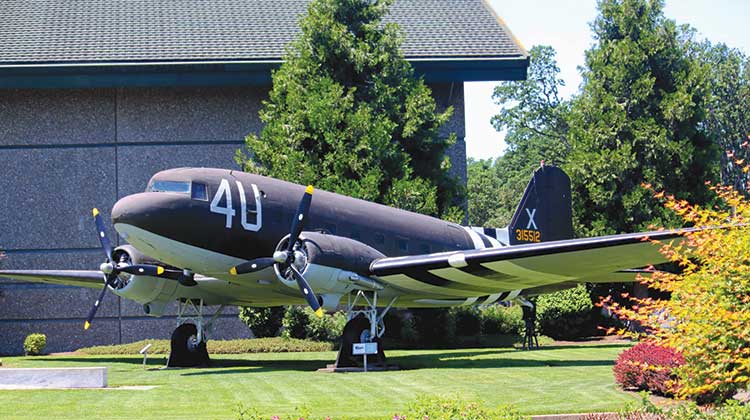 RVers piloting their craft on Oregon Highway 18, between Salem, the state capital, and the rugged coastline, might want to alter their flight plan and land where they and their passengers can reach new heights of exhilaration—the Evergreen Aviation and Space Museum in McMinnville.

The museum houses some of the finest collections of aircraft memorabilia on the West Coast, perhaps second in the nation only to the Smithsonian Institution in Washington D.C. In two gigantic glass-paned hangars, the museum tells two different stories: the history of fixed-wing flight and the adventure of space exploration. The museum takes visitors back to the beginning when humans first desired to fly like birds and soar to the clouds and then rockets back to the present and into space. And uniquely here, visitors can end their day at t museum by splashing down from an airplane into a pool. 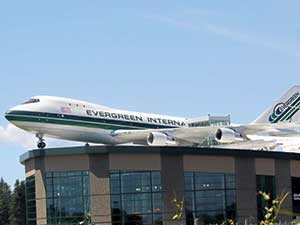 A Boeing 747 sits atop the water park at the Evergreen Museum. Photo Credit: John R. Swaim

When you approach the museum, it’s hard to overshoot the runway; a big Boeing 747 marks the objective. In the parking lot, visitors are greeted by a military icon—a vintage C-47 transport, decked out in “Normandy Invasion” markings. 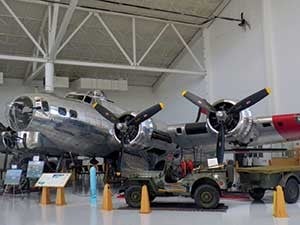 Visitors can walk among historic and classic aircraft, from a replica of the Wright Brothers flyer to the actual and biggest wooden bird to ever take flight, the Spruce Goose. Under the Goose’s massive wings rest an array of aircraft. From World War I’s Spad, to the P-40 Warhawk, the mighty B-17 Flying Fortress, and the sleek silver P-51 Mustang of World War II, these planes conger memories of heroism and daring.

Friends and enemies are also in attendance: a British Spitfire sits within strafing distance of German ME109, and WF190 fighters. Jump into the jet age, and a sleek Messerschmitt ME262, the first true combat fighter, appears fully operational and waiting for the pilot. Early U.S. jets, the Shooting Star and Saber, reside here; their arch rival over the skies of Korea, the U.S.S.R.’s Mig 15, rests on the tarmac. Accelerate to the present and view a mighty F-15 Eagle, with its swept-back wings and dual vertical stabilizers. My, how far we’ve come since the Wright brothers lifted off in 1903. 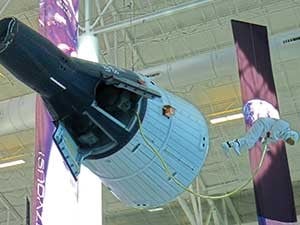 Cross the parking lot and enter the Space Race, with Sputnik, and the first successful manned Russian orbital missions. Then race to catch up; daring Mercury and Gemini missions, Apollo moon landings, and on to the space shuttle and International Space Station. A Mars rover, the latest space explorer, rests just inside the entrance. The weapons of war that started it all entice any Space Age explorer’s interest. Hanging from the ceiling is a captured German World War II V-1 flying bomb, decked out in U.S. markings. Staged and ready for launch is Adolf Hitter’s “wonder weapon,” the haunting V-2 ballistic missile. All their stories live here.

Accounts of early experimentation and advancing development flourish; an X-15 hangs from above, and below it is the fastest and highest flying bird on the planet, a “Blackbird” spy plane. In their dark smooth mysterious glory, they scream supersonic speed even when sitting still. 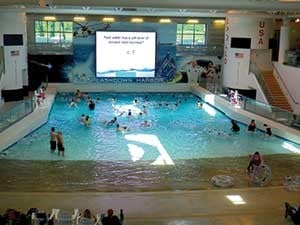 You can splash down into this pool from a Boeing 747. Photo Credit: John R. Swaim

But there’s more! The young, or young-hearted, can rise to new heights at the Evergreen Wings and Wave Water Park. Sitting atop a giant pool enclosure is a Boeing 747, and jutting from its cargo doors are large plastic tubes. The jumbo jet won’t take off, but the passengers will. The tubes are four water slides, offering varying challenges. Ascend to the top of the building, and you are launched on a wild spiraling trip, splashing down in the pool.

If acceleration isn’t your speed, a wave pool will have you floating, rocking and splashing in exhilaration. A shallower pond invites younger aqua explorers to make whirlpools or just float and bob in a plastic inner tube.

Too tired to take off after flying, orbiting and splashing? Next door is Olde Stone Village RV Park, a shady place where you can touch down, change gear and float off to sleep.

The Evergreen Air and Space Museum gives anyone who desires it a wonderful historical insight into some of mankind’s greatest achievements. If it’s only for a few hours, or a pause in a long journey, this stop is one that a highway flyer shouldn’t rocket by. It is well worth the deviation of any flight plan, and the time it takes to land, take in, and enjoy.

John R. Swaim is a writer who lives in Eagle Creek, Oregon.