You are here: Home / Blog / Wildfires Take a Toll on Forests, Man, and Beasts
This post may contain affiliate links or mention our own products, please check out our disclosure policy here. 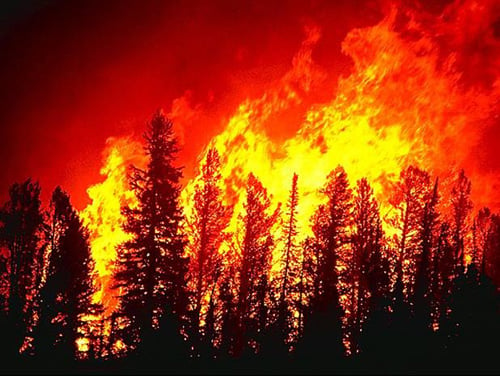 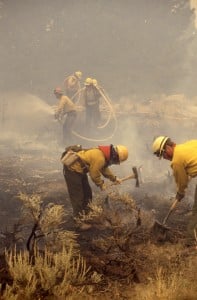 Wildfires rage in 2015. Northern California is burning. Oregon blazes. Three firefighters died in Washington while trying to keep flames from sweeping the whole town of Twisp off the map. At the end of August, with fires still unabated, the federal government had spent more than $800 million trying to douse blazes that rival history’s worst in terms of size, destruction, and cost. In mid-September two California wildfires raced over several Northern California towns, destroying at least 181 homes. A recent report on National Public Radio states that 2,000 homes have burned in western states in a season that started two months earlier in 2015. Drought in the West, creating dry brush and vegetation, fuels these massive flames that leap over treetops, highways, and rooftops and continue to burn with more intensity than ever before seen. 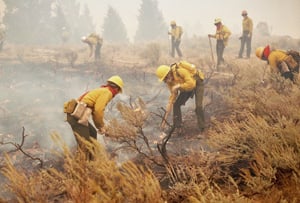 Firefighters on the Ground

In an article for the Washington Post, Kyle Dickman states that while our nightly news flashes images of air tankers dropping 11,000 gallons of blood-red fire retardant and drones mapping a fire’s edges with infrared cameras, the “boots-on-the-ground” work of firefighters has changed little since 1910. That year, Dickman writes, a blaze called the Big Burn scorched three million acres of prime timber across Idaho’s panhandle and spread into Montana, destroying a number of communities and killing 86 people. In the wake of the Big Burn, the U.S. Forest Service, whose income depended on leasing public lands to timber barons who wanted only green trees, dedicated itself to extinguishing every spark in the forests. Troops of young men armed with shovels, axes, and orders cleared flammable material around the perimeter of wildfires. Without fuel to burn, the fires stopped.

In 1934, early rangers risked their lives to save the Lochsa Historical Ranger Station from the Pete King Wildfire. The flames raged over a day, jumping one creek or another, eventually trapping one crew between the new break and the main fire. The men retreated into the old burn until evening and then were brought out by another firefighter. In the meantime, the fire jumped the Lochsa River at Macaroni Creek and ran to the top of Huckleberry Butte Ridge, a distance of two miles in approximately three minutes. A crew of 150 men were forced to make a desperate run for the Lochsa River when their line under Fish Butte could no longer be held. No direct injuries were caused by the fire although there were many cases of mental and physical exhaustion caused by the mad run down the mountain side with only one thought in every mind; “the fire had them.” The 1920s Ranger Station, no longer in use, is restored and open to the public. Old equipment and methods of early wildfire fighting are displayed.

To this day, despite the Forest Service modernizing firefighting with surplus World War II equipment that includes Jeeps, helicopters, and parachutes for smokejumpers, the most effective weapon remains the thousands of young men and women who spend their summers removing flammable materials around wildfires with chainsaws and hand-held tools. So far, no technology has been able to replace human judgment in building fire lines by hand. Yet, 40 percent more acreage than four decades ago is scorched in our nation’s forests, totaling between four and ten million acres each year. Why? Scientists point to our warming climate. The average annual temperature is 1.7 degrees higher than the 20th century average, and that higher temperature wicks water away from plants, drying them out. In 2015, severe drought adds to dryness of sun-scorched vegetation.

But there is also this factor of fire suppression. Centuries ago, blazes ignited by lightning—or even native people—burned every five to ten years, thinning the forests of saplings and brush. Following the Big Burn, firefighting efforts were highly successful, with the area burned by wildfires reduced from an annual average of 30,000,000 acres during the 1930s, to between 2,000,000 and 5,000,000 acres by the 1960s. The need for lumber during World War II was high and fires that destroyed timberland were deemed unacceptable. In 1944, the U.S. Forest Service developed an ad campaign to help educate the public that all fires were detrimental, using a cartoon black bear named Smokey. Although thinking that fire is natural—and necessary—in many ecosystems, the iconic firefighting bear can still be seen on posters with the catchphrase “Only you can prevent forest fires.” Early posters of Smokey Bear misled the public into believing that western wildfires were predominantly human-caused. In Yellowstone National Park, human-error fires average from six to ten annually, while 35 wildfires are ignited by lightning. 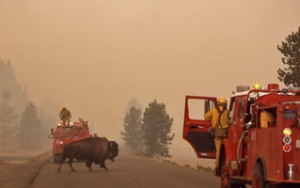 And so, policies for wildfires changed. In 1963, a group of ecologists consulted by the National Park Service recommending that wildfires should be allowed to periodically burn to restore the environmental balance in parks. The Wilderness Act of 1964 addressed the role of fire as a natural part of ecosystems. By 1968, the National Park Service adjusted its fire management policies to determining that fires that started naturally by lightning would be permitted to burn if they posed little risk to human life and property. The service also decreed that under prescribed conditions, controlled burns would be deliberately set to restore balance to ecosystems.

By 1988, Yellowstone National Park was overdue for a large fire. In the exceptionally dry summer, the numerous smaller “controlled” fires combined and leaped from patch to patch, burning everything in their paths until the autumn snowfall came. Tens of millions of trees and countless plants were killed by the wildfires, and some regions were left blackened and dead. However, more than half of the affected areas were burned by ground fires, which did less damage to hardier tree species. Not long after the fires ended, plant and tree species quickly reestablished themselves, and natural plant regeneration has been highly successful. 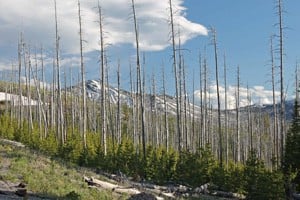 However, growth, especially in Yellowstone, is slow. I remember my first visit to Yellowstone in 1996—eight years after the huge firestorm. Yellowstone’s forests are primarily tall, skinny lodgepole pines. Once a fire sweeps a forest, the tall trees stand straight for years like charred wooden soldiers. Eventually over decades, the tall, bare poles bleach to white. The blackened forests—later looking like millions of ghosts—were depressing in spite of the green new growth flourishing across the forest floor. When we spent the summer of 2014 in Yellowstone, remnants of 1988 fires still lingered. Although reports show few large animals were killed by the fires, the moose population has moved on to surrounding forests with old growth trees that provide a canopy of protection in winter snows. Losses to structures such as visitor centers and lodgings were minimized by concentrating firefighting efforts near major visitor areas, keeping property damage down to $3 million—a cost that would rise to $6 million in today’s economy.

As our nation’s population spread from east to west, fires—prairie fires, forest fires, and wood-framed buildings in newly established towns—devastated families, individuals, and the environment. The intensity of wildfires has increased; areas are more populated. More folks live now in isolated areas—areas that often are surrounded by dry flammable brush. Drought and rising temperatures figure into the wildfire scene—facts over which most individuals have no control. Trees are precious, life-giving essentials in our national parks and forests. And in most of our western lands, a tree takes a human generation to grow. While the fresh green on the forest floor is refreshing, the charred reminders of devastating fires make my heart sad.