You are here: Home / Blog / What I Still Need to Know About Finding Ideal Fuel Stations
This post may contain affiliate links or mention our own products, please check out our disclosure policy here. 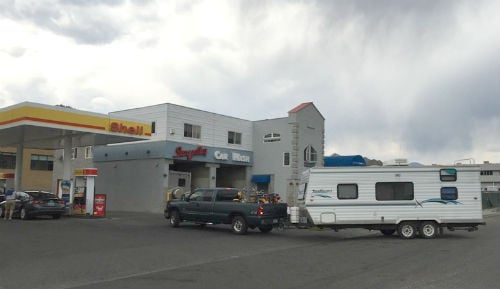 It’s not always easy finding the perfect fuel station for your rig.

A while back I shared a blog entitled “Plan and Practice Accessing Fuel Stations with Your RV” with a focus on finding spacious RV accessible fuel stations in advance to avoid unpleasant experiences during your travels.

Well I am here to admit, I was lazy and didn’t follow my own advice about finding fuel stations.

On a recent trip through Idaho we planned to do a lot of exploring between Ketchum and Stanley. We scheduled several side trips from our camps, on the highway up into the mountains. Since fuel stations were far and few between, the plan was to stop for fuel on the north side of Ketchum.

The last thing I wanted to happen was to leave our explorations in the outback due to lack of fuel. Ketchum is a fairly large town measuring about 10 x 8 city blocks with a major highway running through. Naturally, I assumed there would be spacious fuel stations along the highway coming and going from town.

Well I was right about Ketchum having fuel stations. Yet, I was dead wrong about Ketchum having spacious fuel stations that can easily accommodate RVs. It seems that the fuel stations either don’t fit with the trendy theme of downtown and are now along the back streets or real state has become so expensive (with Sun Valley being the next town over) that fuel retailers can’t afford larger pieces of property. Perhaps it’s a combination of both.

On The Search for Fuel Stations

Regardless, the fuel stations at the north end of Ketchum are in an old section of town where the lots have about 50 feet of frontage to the main street. There is one on a corner with the pumps in a diagonal fashion. This allows motorists to pull in from one street and exit to the other. However, the pumps were so close to the street that my entire travel trailer would block the street while I was fueling the tow vehicle.

Further, the next station was closed and didn’t offer much better access. Out of options, we pulled into the third station. It allowed us to get the trailer out of the street. However, there was no outlet (buildings on both sides and rear) requiring us to back out after fueling. Luckily the street was wide and traffic was light.

Finding fuel stations in Ketchum, ID is just one more adventure in RVing!

In hindsight Hailey is about 12 miles south of Ketchum on Hwy 75 and is much better for fueling RVs. The town even offers a spacious and free double lane dump station and potable water.