You are here: Home / Top Stories / Finding Happiness While Full-time RVing in a Tab Trailer
This post may contain affiliate links or mention our own products, please check out our disclosure policy here.

What happens when you appear to be successful in the eyes of the world, but deep down you’re unhappy with the path you’ve taken? Jessi and Valerie can tell you. They knew there had to be more to life than accumulating stuff so last year the two women said goodbye to their comfortable lifestyle to try full-time RVing in a Tab trailer. Today these “Happy Camper Wives” are creating a new definition of “success” and sharing it with others. 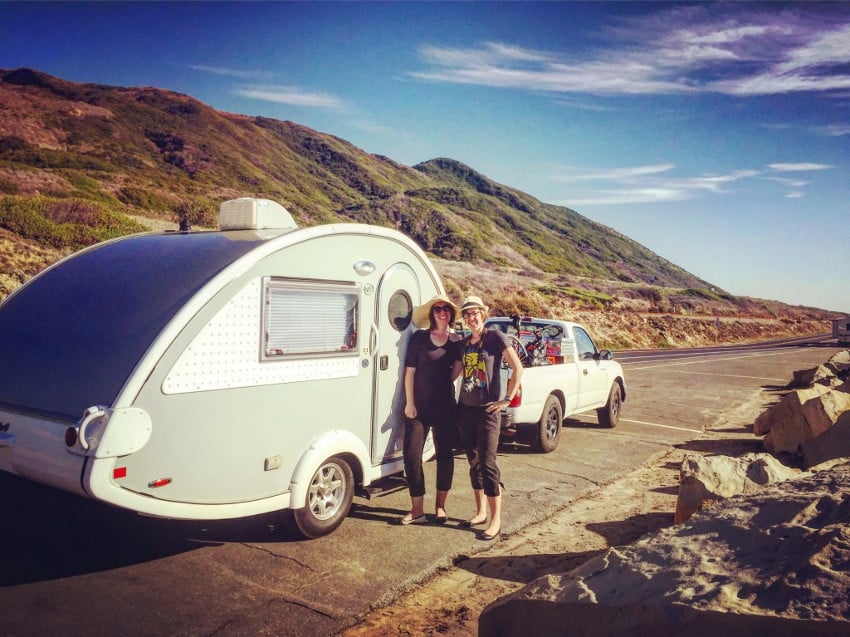 To the vast majority of people, becoming an adult means acquiring all of the external signs of success. From a nice home filled with stuff, to a job with an impressive title, most people don’t question the meaning of success until much of their life is in the rear view mirror. Jessi and Valerie were no exception. They were traveling that path just like everyone else. But before they were 30 years old the San Francisco couple was intuitive enough to hit the brakes.

“We liked our jobs but we ended up coming home being really grumpy,” says Jessi, age 30. At the end of a long commute their quality time together meant eating dinner and watching TV. They had many nice possessions, but Jessi recalls that “our things owned us instead of us owning those things.” One day she and Valerie realized they wanted to travel a different path. “Instead of watching life on Netflix . . . we wanted to actually live,” she explains.

The wives couldn’t have chosen a wilder place to kick off their new chapter. The idea of RVing hadn’t taken root yet, so with nothing more than a few possessions and their two dogs, Sadie and Maxwell, they headed north to Alaska for a temporary summer job. Alaska’s change of scenery and earthy lifestyle was so invigorating they considered a move to Florida once summer was over. Valerie, age 31, negotiated a remote work arrangement with her boss and Jessi’s work as a freelance web designer enabled them to cut the chains of their old life. But their plans quickly changed when an old idea of Valeries resurfaced again.

“Why don’t we live in a teardrop and we’ll blog about it?” she said to Jessi, who quickly agreed “Five days later we bought our trailer sight unseen in Arizona,” Valerie recalls. “We had never been in a teardrop in our life. We just had this sense that this is what we should be doing.”

Full-time RVing in a Tab Trailer Leads to Freedom

Jessi and Valerie’s strong relationship has what it takes to make the most of Tab trailer full-time RVing. Their charming Happy Camper Wives blog is packed with many tips about full-timing. From RV trip planning to living in a small space and getting along with a mate.

“It’s been great for our relationship,” says Valerie. “If it’s raining outside you have no choice you have to sit and work though it.” From honing communication skills to creating a more loving relationship, she and Jessi are flourishing in a space that most other full-time RVers couldn’t handle.

So far each day has been better than the last, they say. “It’s exceeded our expectations,” says Valerie. “All of a sudden we have all this time and all this energy. “We have a freedom that we weren’t really expecting from living so small.”