You are here: Home / Top Stories / Be Aware: Don’t Get Scammed by Skimmers at an ATM or the Pump
This post may contain affiliate links or mention our own products, please check out our disclosure policy here. 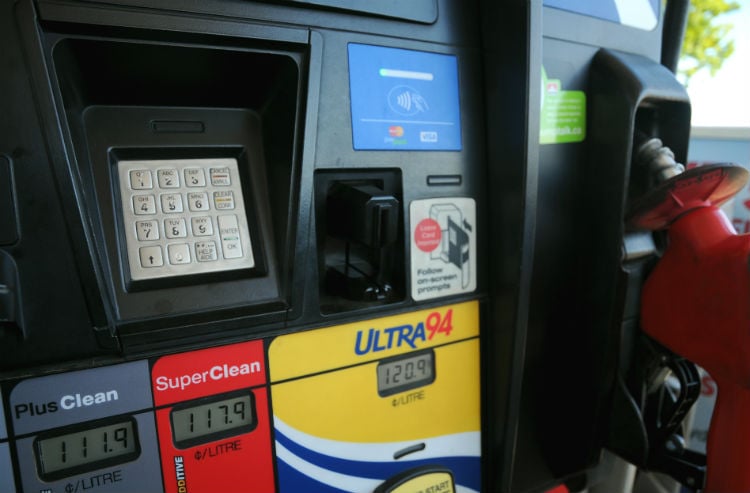 ATM skimmers come in many shapes and sizes to accommodate the various styles of ATM machines or payment systems at gas pumps. Photo by Steve Fennell

The next time you use your debit/credit card at an ATM or to pay for fuel at the pump, perhaps be a little cautious. Since the dawn of these convenient payment options, fraudsters and hackers have been prevalent in illegally skimming personal financial information through credit and ATM cards from the general public – RVers included.

“For quite some time this has been one of the largest fraudulent issues that we address within the ATM channel and it doesn’t seem to be abating very much,” says David Tente, executive director of the ATM Industry Association (ATMIA). “The skimming systems are getting more high-tech and the devices are getting smaller and harder to detect.” 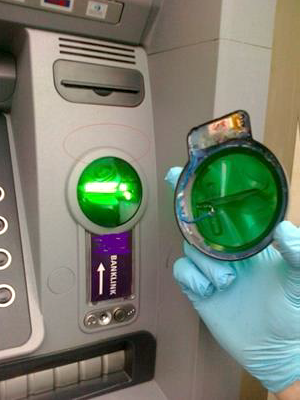 ATM skimmers come in many shapes and sizes. They generally replicate the mold and design of where a card inserts and are in a machine for a certain period of time. Once a transaction is in play, the skimming device illegally obtains and stores pertinent financial information from the magnetic stripe on the back of a card.

“The only things that cannot be taken from the magnetic stripe are personal pin numbers,” says Tente. “But there are a few of ways fraudsters can access that information. First, they will place a pin-hole-style camera in the skimmer to focus on the keyboard to record the pin when users punch it in. As there is a time stamp on the transaction, fraudsters synch the pin information with the card and the pin can then be found out.”

In other cases, fraudsters place a thin keypad on the top of the real key pad. While you push buttons on the machine, you’re pressing the numbers on the skimmer pad. Fraudsters then download the pin from the device.

Ways to Prevent The Scam at an ATM or Gas Pump

While fraudsters are aware that more measures are in place, Tente explains that skimming has been on the rise recently. That`s about to change, however, with a full implementation of EMV conversion across the U.S.

“EMV is the conversion to the chip card,” says Tente. “However, at this time, on the debit side, a lot of issuers have not even started issuing cards. Although EMV has been effective in other countries where essentially one network drives all the debit transactions, there are 20 networks in the U.S that drives all of the retail transactions. EMV was never designed to function in that kind of environment. So it`s taking more time.” 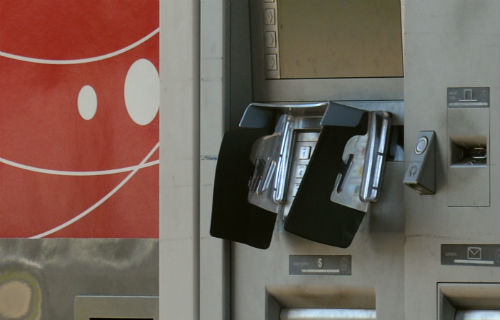 There are a few effective ways to prevent skimming on your debit or credit card.

The point of sale liability shifts all occurred in 2015 except for fuel dispensers, while MasterCard will change over October 21, 2016. EMV technology for Visa will be in effect October 2017.

EMV is used in Europe and Canada, which resulted in a decline of skimming after being introduced. But that`s apparently changing again.

“We can’t prevent it all together,” says Tente. “There are anti-skimming devices on the ATMs that interfere with how the skimmers work and systems are in place to minimize access and detect when skimming is taking place. The chip will reduce this considerably, but it won’t prevent it entirely. Hackers and fraudsters may find ways to skim chip cards. No one has done that successfully yet, but that’s not to say it won`t happen.”