You are here: Home / Blog / Great Escapes: American Eagles Scenic Overlook
This post may contain affiliate links or mention our own products, please check out our disclosure policy here. 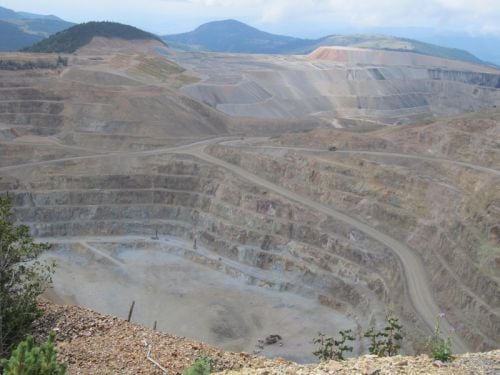 Like most gold rush regions that boomed in the 1800s, Colorado’s Cripple Creek Mining District came from humble beginnings. Little more than cattle roamed the high valleys perched nearly two miles above sea level— that is until gold was discovered in 1863. But unlike most boomtowns, the gold never completely ran out here, and it continues to be mined successfully today. For a bird’s eye view of a modern open pit gold mining operation, head to Victor, Colorado. A few miles outside of town is a rare opportunity to watch the daily operations of the Cripple Creek and Victor Gold Mining Company(CC&V) from atop the American Eagles Scenic Overlook. 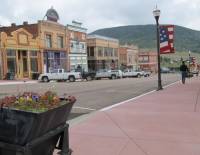 On your drive up to the Overlook (elevation 10,570 feet), expect to stop at a checkpoint and give your name to a CC&V employee. Your visit is welcomed and free, so the checkpoint is for nothing other than your safety. You’ll be told if it is OK to proceed (the road is closed during blasting), and will be cautioned about the giant haul trucks that share part of the same road. No matter the size of the rig you’re driving, the massive 240-ton haul trucks riding on 12-foot diameter tires have got you beat— and they’ve got the right of way!

In 1895, the American Eagles Mine at this site was the highest underground mine in the district. This mine had three shafts, the deepest had reached 1,540 feet by 1902. Shafts are vertical excavations through which miners and supplies are taken into and out of underground workings. Headframes sit above the vertical shaft in order to support the sheave wheel or pulley system that passed the hoist cable from the steam or electric-powered hoisting mechanism to the metal cage that hauled men and supplies. 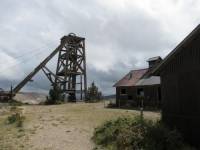 The original American Eagles headframe is still standing, and the double-drum hoist is still in place, too. The shaft, however, has been sealed. Remnants of a blacksmith shop and mine superintendent’s house are also at the Overlook. Interpretive signs around the site tell the story of Winfield Stratton who purchased the American Eagles in 1895 after a huge success with his local Independence Mine. In fact, Mr. Stratton was Victor’s first millionaire and sold the Independence Mine for $11 million. The American Eagles was worked until 1940, but unfortunately little is known about its actual production since it was a private claim.

Don’t forget your camera when you visit. Mount Pisgah and the Sangre de Cristo and Collegiate Mountains make a nice backdrop.

IF YOU GO:
Access the American Eagles Scenic Overlook north of Victor, Colorado at the intersection of County Roads 81 and 83 on Bull Hill Pass. The route is signed. For maps and tourist information, call 855-643-8216 or visit http://victorcolorado.com

Before or after your visit to the American Eagles Scenic Overlook, spend a little time strolling through the gold rush town of Victor. Brick buildings dating to 1899 still line the streets. Interpretive signs posted at intersections around town relate colorful stories of the town’s golden past.