You are here: Home / Blog / Great Escapes: Register Cliff State Historic Site
This post may contain affiliate links or mention our own products, please check out our disclosure policy here. 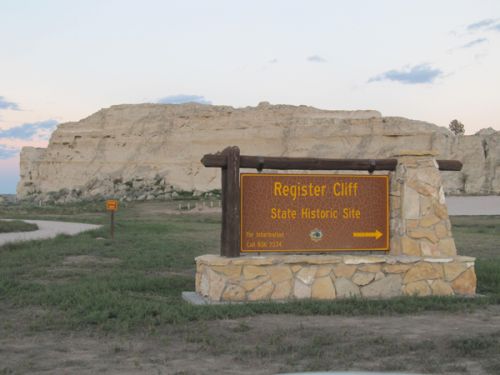 Thousands of years ago, the North Platte River in eastern Wyoming cut through layers of soft sandstone. This natural erosive action created the ideal 100-foot tall canvas for Oregon Trail emigrants to memorialize their trip. Known today as Register Cliff, the majority of the name and date inscriptions here reflect the peak years of travel along the Oregon Trail— the 1840s and 1850s. Several states are represented in the carvings— Ohio being the most common. Some dates were carved into the rock as early as 1829 by fur traders and trappers passing through. One older inscription from 1797 has been authenticated as well. Today, visitors can walk along the cliff base to view the signatures up close. 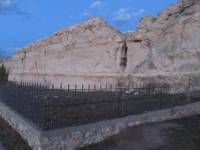 It’s interesting that no known emigrant diary mentions inscribing names or initials along their journey, but more than 700 inscriptions can still be seen here and on other nearby sedimentary rock croppings. Following a day’s journey from Fort Laramie, emigrants would have set up camp here (then known as Sand Draw) to rest themselves and their animals before attempting to cross the North Platte River. Below the cliff, an iron fence protects the graves of three unknown emigrants. Cemeteries were fairly common at river crossings along the Oregon Trail. The crossings themselves were dangerous, and thousands of travelers also succumbed to accidents, cholera and other diseases. 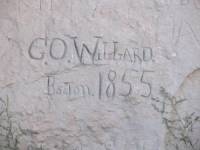 After the decline of Oregon Trail traffic, soldiers from Fort Laramie occasionally added their names here, as did the ranchers and homesteaders who moved into the area in the 1870s and 1880s. At one point, Indian pictographs (paintings on rock) and petroglyphs (carving in rock) were visible on Register Cliff, but not any longer. This area was hunting grounds to several Indian nations, but their early images have been obscured by time and white people.

When traveling through this part of the “Equality State” (nicknamed because Wyoming women were the first in the nation to vote, serve on juries and hold public office), stop at Register Cliff State Historic Site. If you look close enough you just might find a name or two inscribed by a hopeful Oregon Trail emigrant from your home state. 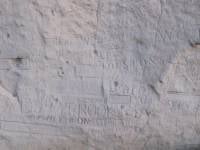 Open year-round during day-time hours. No fee. Restrooms, but no camping or other facilities.