You are here: Home / Blog / Great Escapes: The Breakers Gilded Mansion
This post may contain affiliate links or mention our own products, please check out our disclosure policy here.

Americas “Gilded Age” refers to the post-Civil War and post-Reconstruction era from roughly 1865 to 1900. It was a time of enormous industrial and technological growth, and occurred mostly up North in the former Union states and out West. The industrialists and financiers responsible for the booming railroads, mining, and mechanized factories, were not just wealthy, they were super rich and held prominent positions in society. And they all summered in their Newport, Rhode Island cottages. 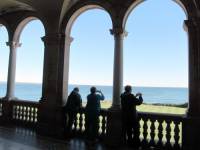 To get a good look at how a house can be gilded top to bottom, tour The Breakers, once owned by the Vanderbilt family. An audio tour of Newport’s most visited historic home begins with a handheld player issued upon arrival at The Breakers on Ochre Point Avenue. Although called a cottage, this 70-room mansion is anything but modest. Listen as the narrator guides you through various rooms and calls your attention to the furnishings and family history. You’ll find gold leaf on just about every vertical surface, crystal chandeliers hanging from stunning mosaic ceilings, marble mantelpieces, an enormous Flemish tapestry wall hanging, and silk damask draperies. Not to mention a massive multi-colored stained glass skylight, ornately carved and decorated paneling, and priceless furniture. The Breakers was indeed a triumphant symbol of the Vanderbilt family’s social and financial power in the late 19th century. 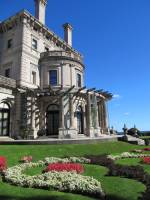 Completed in 1877 for Pierre Lorillard IV, an American tobacco manufacturer and thoroughbred racehorse owner, the original house and grounds were purchased by Cornelius Vanderbilt II in 1885 for $450,000. He summered here with his wife and children until 1892, when the house was completely destroyed by fire. The present house was commissioned in 1893, and rebuilt more extravagantly than ever. If it weren’t for the audio guide, you’d get lost in a maze of grand bedrooms, dining rooms, morning room, billiard room, library, music room, and so many others more lavish than the last. After all, the Vanderbilts, like all the wealthy families during the Gilded Age did their best to out-build, out-dress, and out-party their peers. And they did it all in about eight weeks each summer. Most did not live in Newport year-round.

Maintained by The Preservation Society of Newport County, The Breakers is one of 10 luxurious properties that are open for public tours. Unfortunately, no photography is allowed inside, but the views of the Atlantic Ocean from the vast back lawn will keep your camera clicking away for quite a while. For even more views, check out the cliffwalk, a 3.5-mile trail that borders the shore line and runs behind many of Newport’s famous gilded mansions, including The Breakers.

The Preservation Society of Newport County phone: 401-847-1000
The Breakers is located on 44 Ochre Point Avenue
Tickets may be purchased in person at any Newport Mansions property or online.

Free parking is available at The Breakers, but can fill up fast in the summer. If you’re driving a large motorcoach, follow these directions: from the intersection of Memorial Blvd. and Bellevue Ave. in Newport, head south 1.1 mile on Bellevue Ave., turn left onto Ruggles Ave. Turn left onto Ochre Point Ave. The entrance to the motorcoach parking lot is well marked. The motorcoach parking lane runs along the perimeter of The Breakers parking lot; coaches should park on the left side of the parking lane.  No parking of motorcoaches on Ochre Point Avenue, per city ordinance.