You are here: Home / Blog / Golfer Dies After Being Struck by Lightning
This post may contain affiliate links or mention our own products, please check out our disclosure policy here. 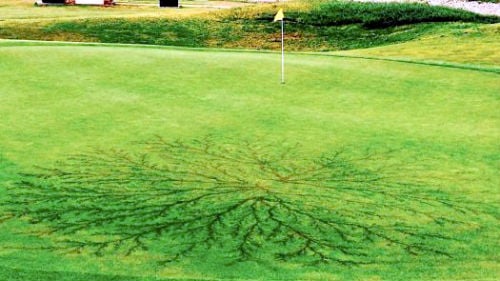 The aftermath of a lightning bolt on a golf green.

Last week in Colorado, a 23-year-old man died on a golf course after being struck by lightning; the first golfer this year. Sadly though, he is the 18th casualty this year due to lightning, reports the National Weather Service.

The NWS estimates there are 25 million lightning flashes in the United States each year, killing an average of nearly 60 people annually. According to the National Oceanic and Atmospheric Association, just over 75 percent of U.S. lightning deaths occur in June, July, and August. The statistics also reveal that about five percent of annual lightning deaths and injuries in the United States happen on golf courses.

Since 2001, however, NOAA has made a concerted effort to raise lightning awareness in the golf community. This outreach has made a huge difference since lightning-related deaths on golf courses have decreased by 75 percent. NWS reports that the top leisure activities where lightning deaths occur include: Fishing, camping, boating, and soccer.

Consider These Tips to Avoid being Struck by Lightning

• If you are hopelessly isolated in a level golf course or field and you feel your hair stand on end indicating lightning is about to strike— squat low to the ground on the balls of your feet. Place your hands on your knees with your head between them. Make yourself the smallest target possible and minimize your contact with the ground. Do not lie flat on the ground.

Be safe out there.