You are here: Home / Columns / RV Golfer / Adventure Awaits At The Northernmost & Southernmost Golf Courses In America
This post may contain affiliate links or mention our own products, please check out our disclosure policy here. 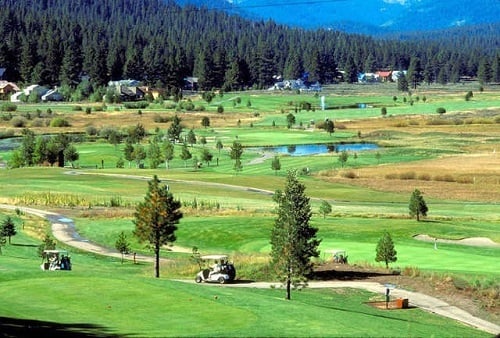 Out of the 16,638 golf courses in the United States, two stand out for their extreme locations. The northernmost golf course in the U.S. is North Star Golf Club in Fairbanks, Alaska, and the southernmost track is Key West Golf Club at the very tip of the Florida Keys.

These two distinct golf courses are about 5,071 miles apart. If you’re driving a car between the two courses it will take roughly 81 hours, and typically longer in an RV. This scenic road trip traverses through nine state, four Canadian provinces, and the Yukon Territory.

Key West features palm trees, egrets, and iguanas, among other exotic flora and fauna. At North Star you may spot moose and bear on the course, while eagles perch in the surrounding evergreen trees.

North Star sits at the 64th parallel, less than 200 miles south of the Arctic Circle. Balmy Key West is at the 24th parallel just 90 miles north of Cuba. 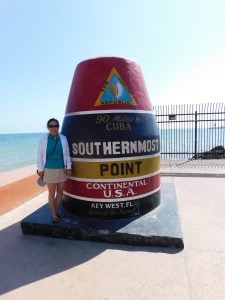 According to Doug Carter, director of golf operations, the signature hole is undoubtedly No. 8. This par 3 is 185 yards, but requires a precision tee shot over thickly intertwined tropical mangroves; there’s little room for error. 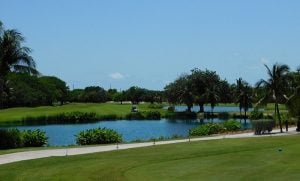 Physically located on Stock Island, Key West Golf Club is a few miles from downtown Key West. Most visitors come to enjoy the warm tropical breezes off the Gulf of Mexico, or to sip a margarita at one of the many bars on Duval Street.

Other attractions include the nightly carnival atmosphere during sunset at Mallory Square, a reflective stroll through the Ernest Hemingway House, and of course, to pose for a photo next to the Southernmost Point Buoy. Leo’s Campground is just across the highway (A1A) from the golf course.

Alaska is called “The Last Frontier” for a good reason, and even North Star Golf Club’s permafrost fairways and greens are indicative of that moniker. Owner/superintendent Roger Evans shared that when the course opened in 1993, the greens were completely flat. Today, however, permafrost has created land shifts beneath the greens and other parts of the course, resulting in a design reminiscent of a true Scottish links course.

North Star Golf Club, depending on the weather, is open from May through September, give or take a few weeks on either end. It also doubles as a Nordic ski and snowshoe area during the winter months. 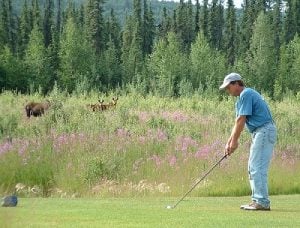 The 18-hole, par 72 track stretches to 6,342 yards, and will never be on a short list for any PGA tournaments. The uniqueness of North Star Golf Club, though, is in its character. A great example is the scorecard, which also includes an animal-sighting scorecard at the bottom of the golf scorecard! Just check them off as you see them, which can include snowshoe hare, red back vole, sand hill crane, red squirrel, marsh hawk, muskrat, marmot, coyote, moose, bear, eagle, raven, and fox.

If you are lucky enough to visit North Star on or near the summer solstice you can golf nearly 24 hours straight. Another option is to sit outside on the clubhouse deck and watch golfers and wildlife tackle the course. Either way, you can’t go wrong.

If you’re RVing in the area, River’s Edge Resort in Fairbanks is a good choice. It’s less than 10 miles to North Star Golf Club, and offers 167 sites by the picturesque Chena River.

Whether you head to the northernmost or southernmost golf course in the United States, a great experience awaits.

Rick Stedman is an avid golfer, RVer, and writer who lives in Olympia, Washington. Rick writes a weekly golf blog, “The 19th Hole” for RV Life. You can reach him at rstedman@gmail.com.