You are here: Home / RV News / Will There Be A Propane Shortage This Winter?
This post may contain affiliate links or mention our own products, please check out our disclosure policy here. 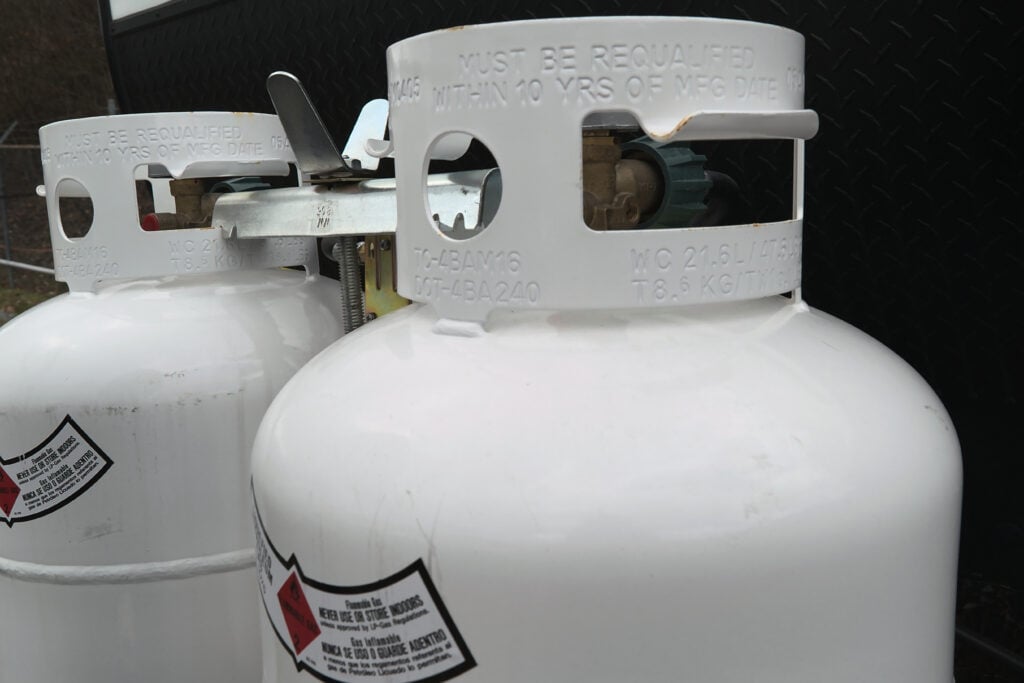 The Problem with Propane for RV Heat and Cooking

With an extra cold winter on the horizon and rumors of a propane shortage, many people have started to worry that the U.S. might run out of the fuel that is necessary to heat their homes during the 2021 winter season. About 10% of Americans heat their homes with propane, which accounts for millions of people who could be put at risk if the supplies ran out (source). Others use propane to power appliances and heat their  RVs, so a national shortage could be disastrous for many Americans who are trying to keep warm this winter.

Propane prices are currently higher than they have been since 2014, and national stockpiles are being stretched thin due to high demand inside and outside the country. According to the U.S. Energy Administration, it’s projected that about half of the Americans who use propane to heat their homes will spend 54% more than in previous years. If the weather is particularly cold, they might even pay up to 94% more!

However, despite these troubling trends, it seems unlikely that the country will completely run out of propane during the winter, as the U.S. is one of the top propane suppliers and is capable of increasing production to prevent a major crisis. Supplies may be somewhat limited, and it’s likely (and almost inevitable) that the prices will be higher in the winter of 2021. Homeowners and RVers who rely on propane should prepare for this situation and possibly consider switching to alternative energy methods that will be more sustainable.

Propane has been a reliable source of power (and specifically heat) in the U.S. for years. It has historically been cheap and easy to access. However, the winter of 2021 and soaring propane prices have put this industry in danger in the eyes of many consumers. As more people stayed at home during 2020 lockdowns, the use of air conditioners, heaters, and even propane-powered backyard grills increased. By itself, this may not have been a huge issue, but the U.S. is also facing the probability of a particularly cold winter.

La Niña is expected to create lower than average winter temperatures in 2021. Climate.gov projects that there’s an 87% chance of La Niña having an effect on a national scale. This phenomenon takes effect when waters in the Pacific Ocean are cooler than usual and create a series of cold-weather storms that move across North America. This is expected to mess with other weather patterns. The polar vortex will take effect earlier than usual. The Northeast areas of America are projected to be hit the hardest by this combination of weather patterns (source).

Even once we reach January of 2022, the weather is still supposed to be quite cold. The current prediction is that temperatures will stabilize or even rise a bit during December. Then you can expect a drop in January. To make a long story short, it’s looking like it will be a long, cold winter for everyone.

These cold weather conditions inevitably lead to higher demand for heat and fuel across the country. Propane stockpiles are already being stretched thin by consumer demand. This is happening both inside and outside the country and natural gas is increasing in price as well. The U.S. is a major exporter of propane and natural gas. Many other countries depend on American-supplied fuel. Other major players in the industry include manufacturers in the Gulf of Mexico, Russia, and Norway. All of these countries experienced production outages that just made the shortage problems worse.

Europe has already begun to experience blackouts and supply shortages. So far, the U.S. has been spared this fate. But propane prices continue to rise. Because the U.S. is a major supplier, it’s unlikely that the country will completely run out of fuel. However the scarcity coupled with inflation has made it more expensive for many people (source). Propane is mainly used by those who live in rural areas. It will be harder for them to access new types of fuel or compete with major cities if push comes to shove.

It really is a perfect storm of factors that has led to the current global propane shortage.

What does this mean for RVers?

For those who live in RVs year-round, the propane shortage could pose a few problems. Many RVs use propane tanks to power their heating or A/C systems. They also provide the fuel that is used for cooking, showering, and heating water. A national shortage like this could mean that a purely propane-fueled RVs won’t be practical this winter.

To cope with this situation, RVers need to be mindful of their fuel consumption. It used to be a given that you could find propane tanks just about anywhere you traveled. But this may not be the case in 2021. If you don’t have a backup plan, now is the time to make one. Many RV heaters run off of battery power or solar energy. These heaters might be worth exploring. Gas-powered generators and heaters could also be an option. But these come with their own limitations.

Make sure your RV is as well-insulated as possible to conserve heat. Stock up on blankets, space heaters, and other heat-producing items that don’t run on propane. It’s also best not to tempt fate in circumstances like this. Don’t travel to particularly cold areas where you could be isolated and stranded without access to heat. Consider traveling south for the winter and try to stick to warmer areas.

The future of propane

When you look at the overview of this problem, it’s easy to feel panicked or overwhelmed. It’s important for everyone to stay calm during these times. Look for productive ways to work through it. Hoarding fuel is not recommended. Behavior like this will only make the shortage situation worse. Use only what you need and no more.

Propane has been a wonderful source of energy for many years. But problems like this have made many people question whether this is still the right source to turn to for heat. The global supplies are limited. Sometimes production lines can’t keep up with the increased demand. The prices also continue to rise while people struggle to pay for other essentials as well.

The potential propane shortage of 2021 has led many people and governments to consider alternative sources of heat and energy. There have been long-term goals in place for a long time to reduce the amount of propane and natural gas consumption. But a crisis like this might increase the urgency of these initiatives. As long as people are willing to pay the price for propane, it is hard to commit to a full switch (source).

The winter of 2021 might prove to be an important landmark in the fields of inflation, renewable energy, and propane and natural gas reliance. The demands of this winter may stretch propane supplies further than ever before. But the U.S. should continue to have access to this fuel source. However it will be at a higher price than ever before. Make sure you have a few backup plans in place. Buckle in for a long, cold winter.

Emily Lawrence lives in Idaho with her husband Nathan. Despite the cold winters in this area, it’s Emily’s favorite season! She loves to spend time skiing, roadtripping, and just exploring the outdoors.