You are here: Home / Great RVing Destinations / Tee It Up At These Route 66 Golf Courses
This post may contain affiliate links or mention our own products, please check out our disclosure policy here. 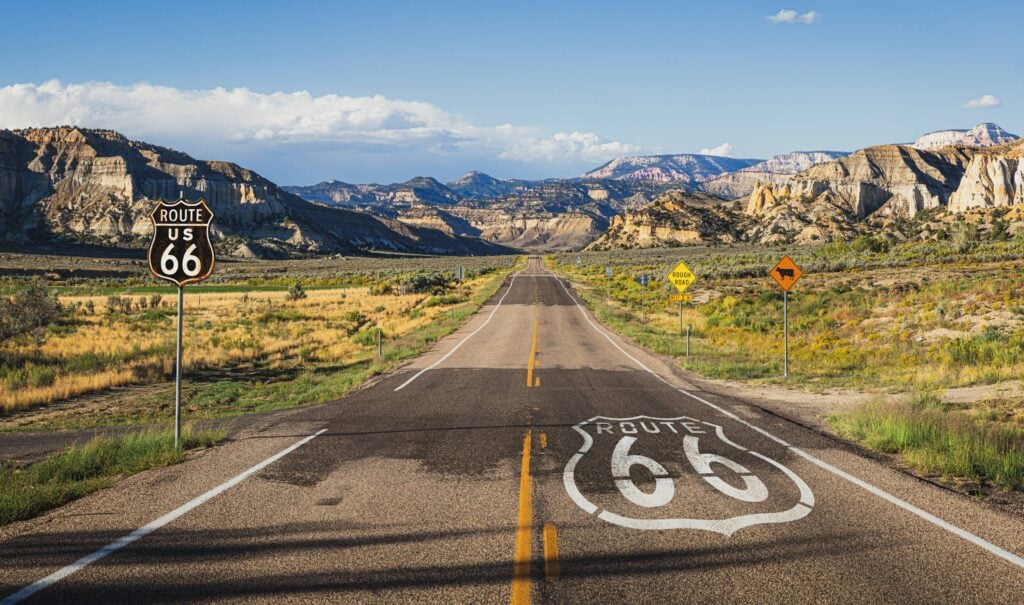 How to Golf Your Way Across Route 66

When Route 66 was conceived in the 1920s, building golf courses along its more than 2,400 miles in eight states and stretching from Chicago to LA was never a consideration. Instead, this stretch of highway brought many dreamers west in search of a better life. Those dreamers were eloquently described by John Steinbeck in his novel “The Grapes of Wrath.” Steinbeck also tagged Route 66 with the affectionate moniker: The Mother Road.

Iconic Route 66 was eventually replaced by a series of Interstate highways. They included I-55, I-44, I-40, I-15, and I-10. However its nostalgic and everlasting impression lives on in the hearts and minds of many. There are still numerous remnants of the original Mother Road that attract visitors far and wide, including international visitors. Though Route 66 was officially decommissioned in 1985, there are still many nostalgic nods to this bygone era.

These Route 66 Golf Courses Are Waiting for You!

Golfers will doubly enjoy a trip down memory lane, exploring the past while enjoying the present.

As you head out of Chicago on Historic Route 66 (now Interstate 55), golfing options abound, along with remnants of the Mother Road. Golfers can experience a quick nine at Green Meadows Golf Course. Green Meadows is part of Dupage Golf, which operates three courses in the area. Nearby,  Dell Rhea’s Chicken Basket located in Willowbrook, is a must stop. This quaint restaurant is the home of a secret fried chicken recipe which has been attracting customers for more than 60 years.

While in the Land of Lincoln, don’t miss a stop at the Route 66 Association of Illinois in Pontiac. This comprehensive summary includes a list of destinations, various routes, maps, and a laundry list of must-see attractions along the Mother Road.

One of those is Henry’s Rabbit Ranch in Staunton, Illinois. Officially named Henry’s Rabbit Ranch Station and Visitor’s Center, the outside offers a classic filling station like many other previously found all along Route 66. Visitors can also find a selection of Route 66 gifts and collectibles.

Staunton’s peaceful rural setting is also home to Timber Lakes Golf Course, which is just off I-55. This 18-hole track stretches to 6,960 yards, and is only 40 minutes from St. Louis, MO.

Also located within metro St. Louis is Route 66 State Park. Capturing a snapshot of the Show Me State section of the Mother Road, the park offers a visitor center with a comprehensive display of photo memorabilia. The park offers a respite from driving, and visitors can take a walk on the trails or enjoy a picnic.

Heading west about three hours and you discover one of Springfield, Missouri’s best public courses: The Bill & Payne Stewart Golf Course. Named after PGA professional Payne Stewart and his father Bill, the course originally opened in 1947 under the design of Perry Maxwell.

Stop at the Route 66 Car Museum in Springfield

This privately owned museum houses nearly 70 vintage vehicles including the famous truck from the movie “The Grapes of Wrath,” which starred Henry Fonda. 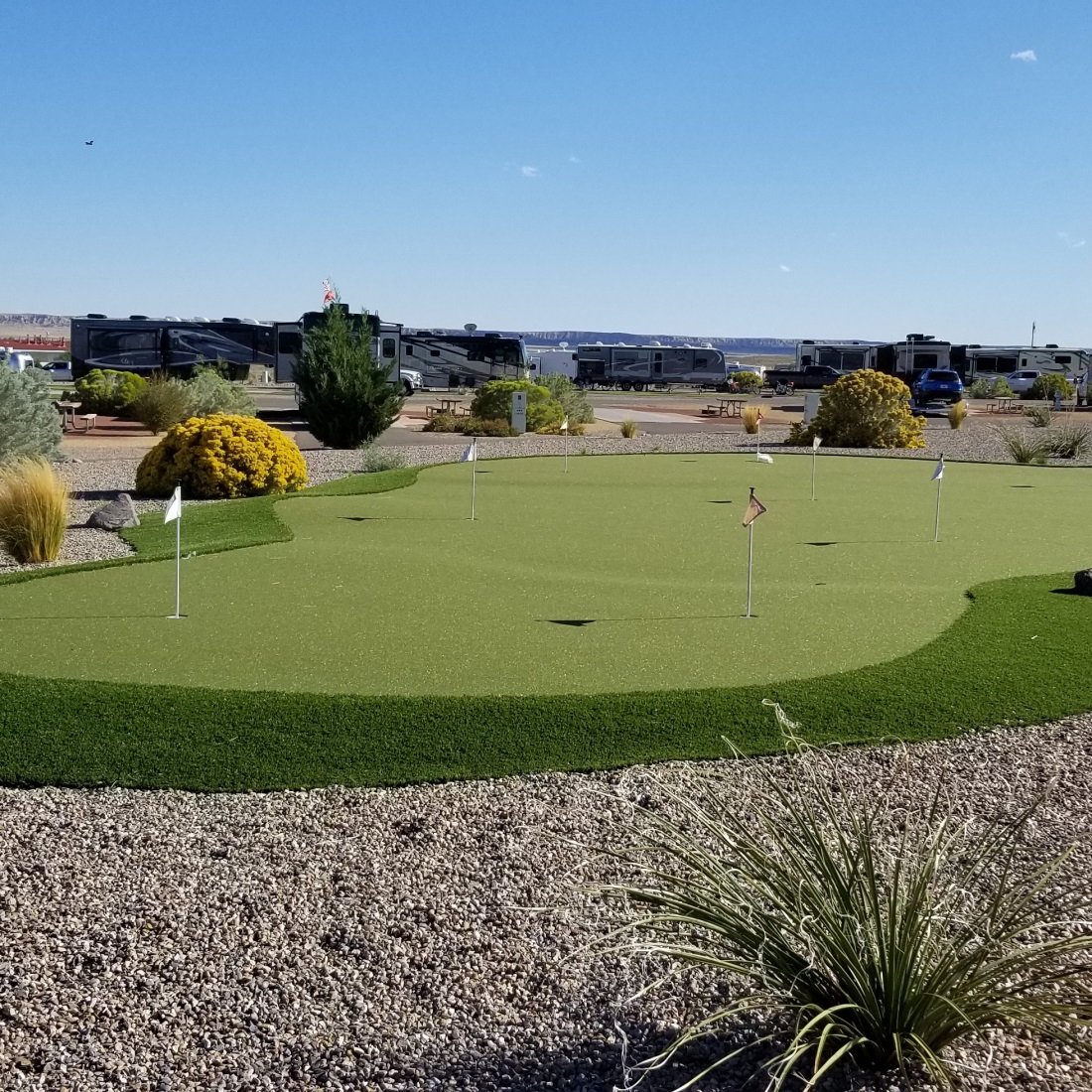 As you journey west, you’ll pass a few more quality courses in Missouri including Carthage Golf Course and Schifferdecker Golf Course in Joplin. Before reaching Oklahoma, Route 66 passes briefly through Kansas, for just over 10 miles. But while there, you can tee it up at Baxter Springs Golf and Country Club, a nine-hole course that is open to the public. Enjoy lunch as well before heading to Oklahoma.

Though you can find a dozen or so Oklahoma golf courses on or near Route 66, a few to highlight include Tulsa’s Page Belcher and Mohawk Park. Both feature two 18-hole tracks.

Amarillo, Texas offers of wealth of Route 66 reflections in the town’s historic district. There are also four golf courses available through the city’s Play Golf Amarillo website. A few other Texas Mother Road highlights include Amarillo’s famous Cadillac Ranch, the marking of the Route 66 midpoint in Adrian, and the Ghost Town of Glenrio.

Albuquerque, New Mexico was also a stop for many driving Route 66. Some nostalgic remnants are still present in the Old Town area of the city. With 310 sunny days annually, Albuquerque offers plenty of golf.

In Arizona, reflections of Route 66 can be seen in Winslow, Flagstaff, and Kingman. Any visitor to Winslow has to take the obligatory photo of themselves “standing on a corner in Winslow, Arizona.”

Don’t miss Cerbat Cliffs Golf Course near Kingman, or one of the quality courses near Flagstaff including the Continental Golf Club and Flagstaff Ranch Golf Club.

As you come to the end of your trip in California, make a stop in one of the several golf courses along the route such as Apple Valley Golf Course, Green Tree Golf Course, or Ashwood Golf Course, all just south of Barstow, CA. Other notable courses include the Marshall Canyon Golf Course, a public 18-hole course established in 1966, as well as Alhambra Golf Course near Los Angeles.

When you are traveling the historic Route 66, don’t be in a hurry. There is so much to see and to do if you allow yourself.

For help mapping out your route for your next RV getaway, look no further than RV LIFE Trip Wizard. This online planning tool makes it easy to plan an RV-safe route. It can also locate interesting sites along the way, all according to your travel preferences. Get RV LIFE Trip Wizard with its accompanying RV LIFE App, and start planning your adventure today!