You are here: Home / Great RVing Destinations / Route 66 RV Parks That You Won’t Want To Miss
This post may contain affiliate links or mention our own products, please check out our disclosure policy here. 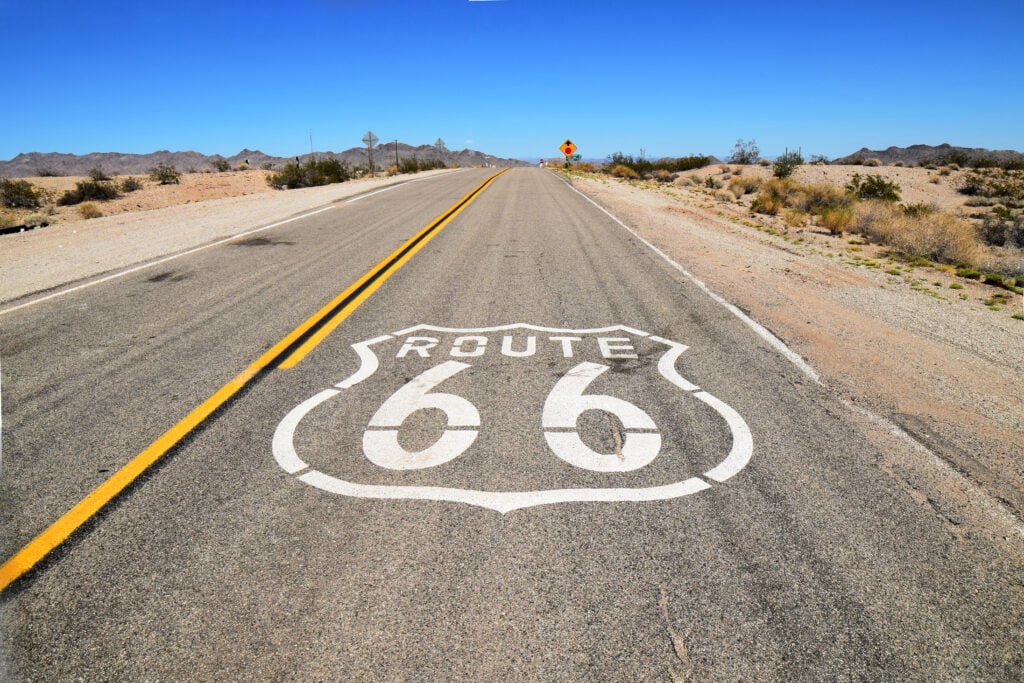 Route 66 RV Parks That You Won’t Want to Miss

The historic U.S. Route 66, at 2,448 miles, is a must-see when traveling across the country. Of course, you will want to take your time, see the sites, and stop at a few Route 66 RV parks along the way.

U.S. 66 served as a primary route for those who migrated west, especially during the Dust Bowl of the 1930s, and the road supported the economies of the communities through which it passed.

In June 1985, it was officially removed from the United States Highway System and replaced by segments of the Interstate Highway System. Portions of the road that passed through Illinois, Missouri, New Mexico, and Arizona have been designated a National Scenic Byway with the name “Historic Route 66.”

There is still plenty to see along the route and some great Route 66 RV sites as well. You might want to start your trip at Chicago’s Grant Park. This marks the eastern terminus of Route 66. Alternatively, you may want to kick off your road trip from the western terminus in Santa Monica.

Several relics of Route 66’s heyday remain near the park, including Route 66 signage and the Clarence Buckingham Memorial Fountain. This is one of the largest fountains in the world and was constructed one year after Route 66 was completed. The fountain has lights at night and live music is performed there as well.

As you begin your journey, don’t miss this Route 66 RV park near St. Louis. The St. Louis West KOA offers spacious pull-through sites with full hookups. With lots of trees and a nearby creek, this park also offers an off-leash dog park, bike rentals, a basketball court, ping pong and more. Enjoy the natural hot springs spas, playground, or pickleball courts. Kids will love the heated pool, the gem mining station, and the jumping pillow.

Open year-round, this KOA is within 30 miles of downtown St. Louis and just one mile from Six Flags St. Louis and I-44. It is also close to other attractions such as the Gateway Arch, The Zoo in Forest Park, Missouri Botanical Garden, City Museum, Anheuser-Busch Brewery, and Grant’s Farm.

While you’re there, check out the “Chain of Rocks Bridge.” This famous bridge was a mile long and more than 60 feet above the Mississippi River. It is a significant landmark for travelers who drove down Route 66. Today, the bridge is linked to more than 300 miles of trails on both sides of the river and has become part of the Route 66 bikeway. It has also been listed on the National Register of Historic Places since 2006. 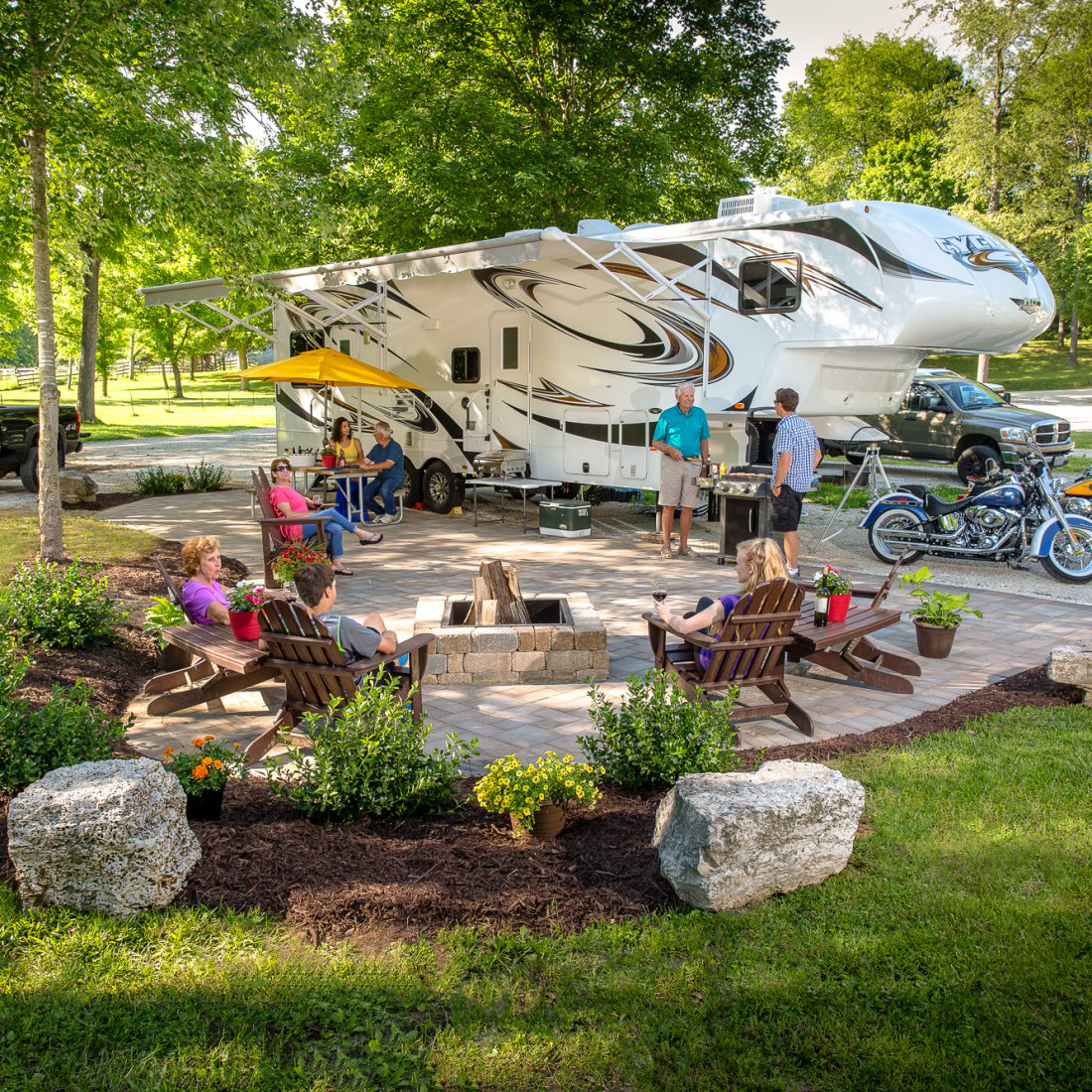 This Route 66 RV park offers the chance for visitors to explore landmarks throughout the city of Springfield, as well as many campground amenities.

This big-rig friendly campground offers a shady retreat in the heart of the Ozarks with long pull-thru sites and full hookups. Amenities include pickleball courts, bike rentals, a pool, playground, and camp store. Also enjoy the ice cream socials or let Fido run at Kamp K-9.

“Stayed just one night passing through area. We did not plan on the stay, so staff was nice and accommodating a last minute reservation. Easy to find of the interstate. They got us right in and led us to the pull-through site. Did not use many of the amenities. I will say that the site was gravel and level. Shaded. The entire campground looked clean and the facilities that we used were very clean. Individual bathrooms and showers that were close to us were very clean. Wifi was ok. From what we saw, there were things to do for the kids. We camped at Springfield / Route 66 KOA in a Motorhome.” – Campground Reviews user Mm1407 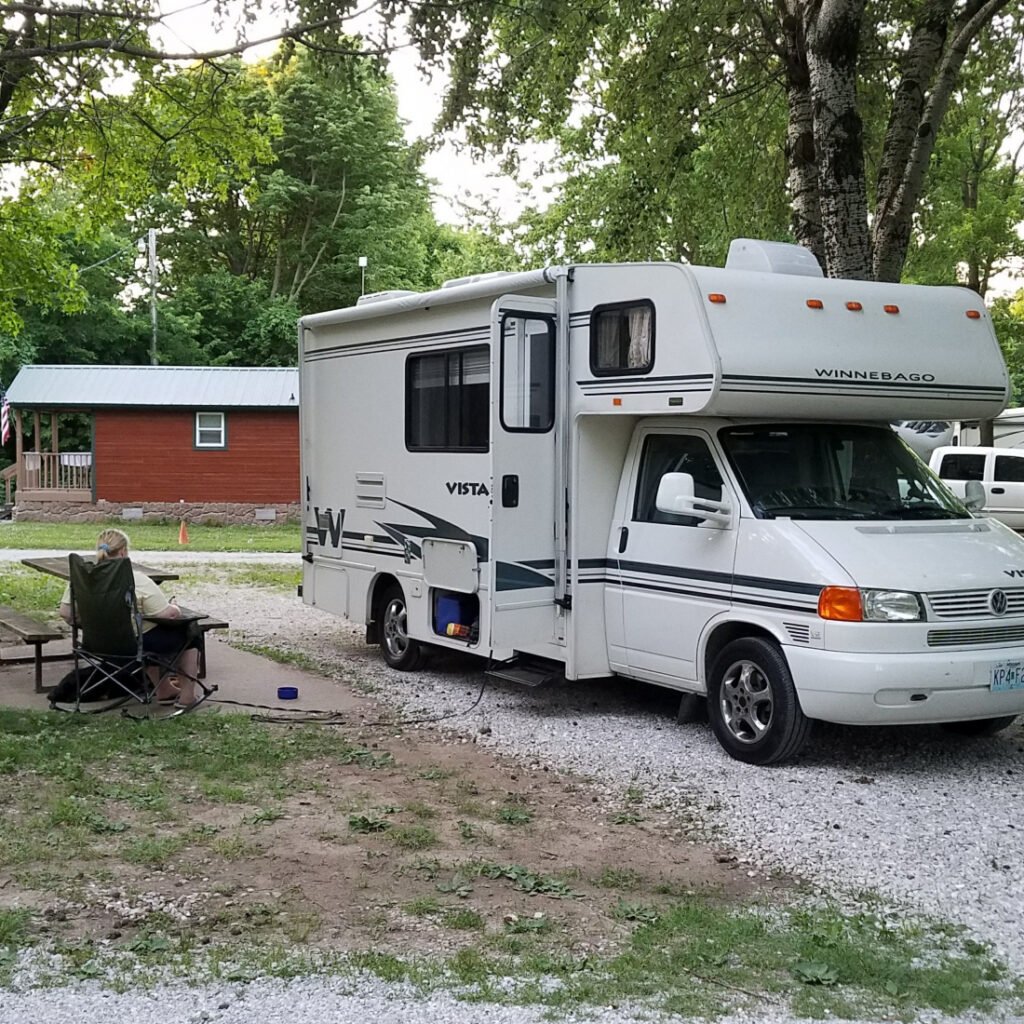 Big Red Barn RV Park is located right off the historic Route 66 (now I-44) in Southwest Missouri. The campground is open year-round with spacious pull-thru sites and full hookups. The sites include concrete patios, WiFi, cable TV, and access to their laundry and bathhouse facilities.

History buffs will not want to miss the nearby Battle of Carthage Civil War Museum. The area also has several local restaurants with all types of cuisine from pizza and BBQ to burgers and Mexican food. 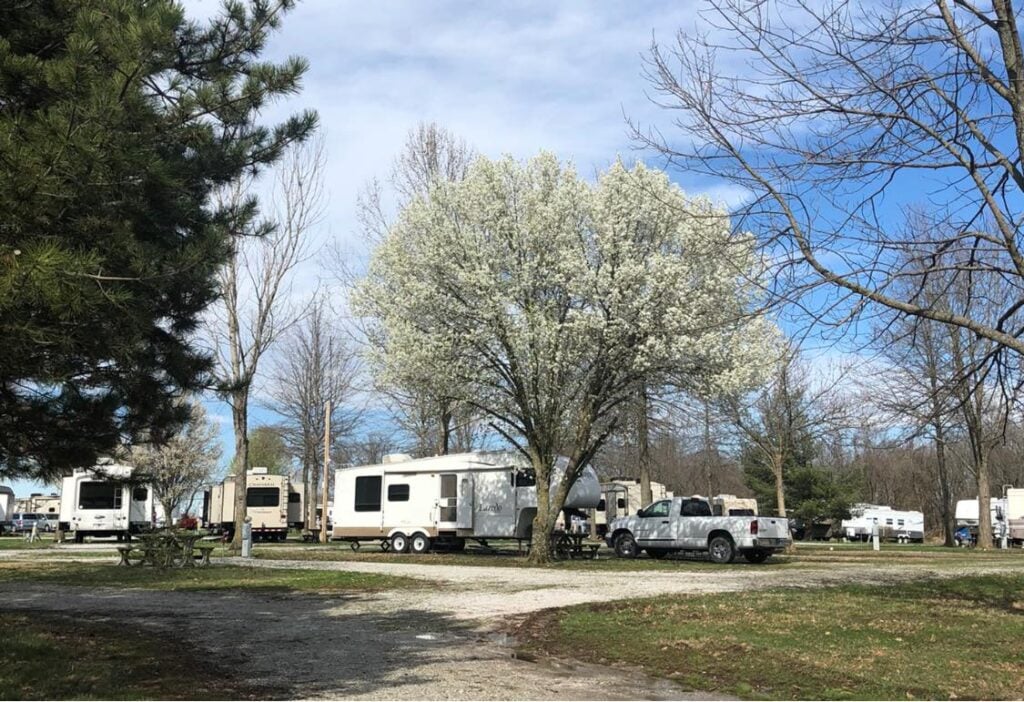 Just off I-40 and halfway between Elk City and Clinton, this Route 66 RV park is also near two museums dedicated to all things Route 66. The National Route 66 Museum in Elk City is one of the most comprehensive with a journey through all eight states and plenty of memorabilia, including antique cars and Popeye memorabilia.

At the Oklahoma Route 66 Museum, located in Clinton, you can learn about the road’s construction, see vehicles from the time period, and take part in interactive activities. At the end of the museum, you can stop by the drive-in theatre or check out the gift shop.

The Elk City / Clinton KOA has long, level sites with full hook-ups, a pool, camping kitchen, playground, and dog park. The campground is a short walk to Clinton Lake for sand bass and crappie fishing, as well as 11 miles from Foss Lake, known for bass fishing.

Nearby Lucky Star Casino and golf courses are a short distance away. Visit Stafford Air & Space Museum or Washita Battlefield National Historic Site, both within an hour’s drive. In season, you can dine on-site. 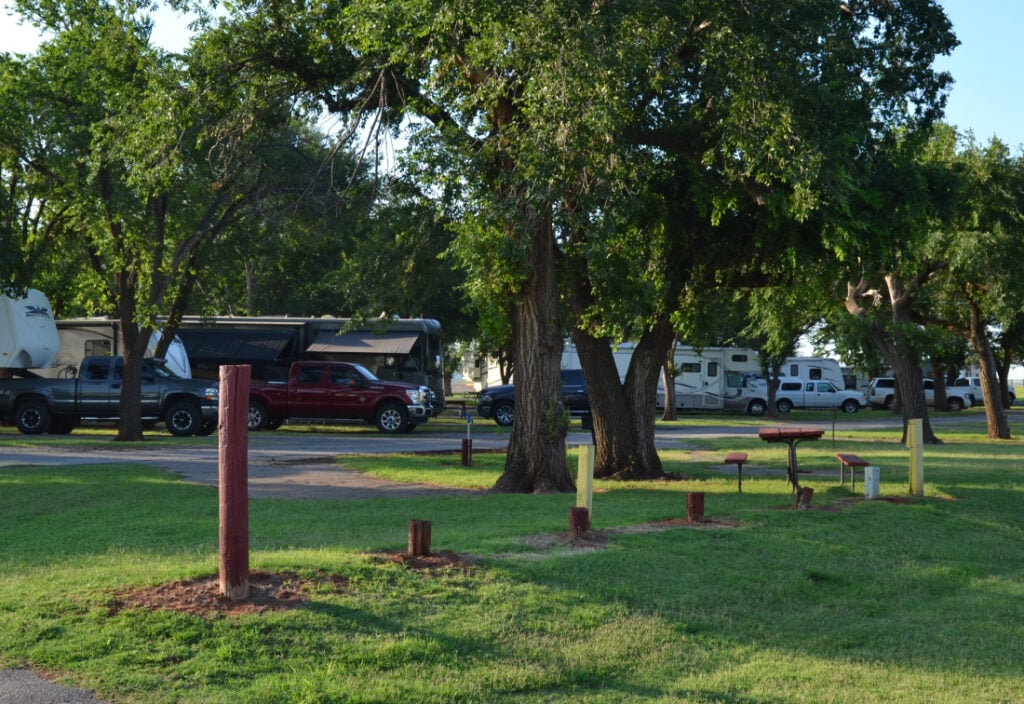 Other amenities include a camp store, dog run, play area, restrooms and showers, and laundry. Explore nearby Shamrock, Texas where there are many restaurants, historic sites, and notable attractions. 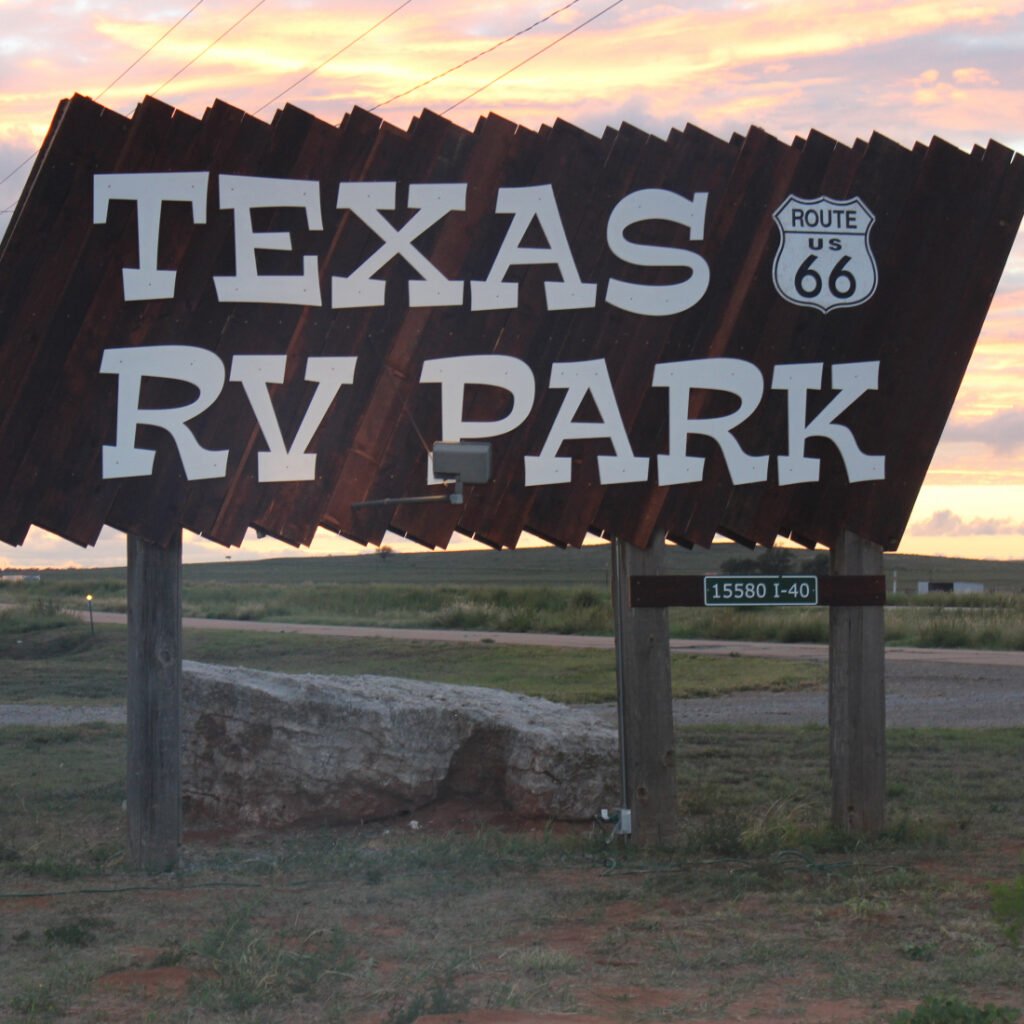 Take a few days to enjoy the campground amenities and some great Route 66 historic venues near the Amarillo KOA. This family-friendly campground features well-groomed sites with full hook-ups and lots to see and do nearby.

Visit the gift store, take a limo ride to the World Famous Big Texas Steakhouse, or play ladder ball. Enjoy the KOA’s Western metal art displayed within the campground. Within a quarter mile of the campground, airplane enthusiasts can see Aviation Bluffs, featuring a wide variety of aircraft.

Be sure to wander the famous highway and see Cadillac Ranch, one of Route 66’s most popular attractions. The sculpture is made up of ten old Cadillacs, half buried nose down, standing as a monument to America’s “Golden Age of the Automobile.” Graffiti is encouraged with passersby allowed to leave their mark. Don’t miss the galleries, antique shops, and historic saloons in the Route 66 Historic District just west of downtown Amarillo.

Also check out the American Quarter Horse Heritage Center & Museum or drive to the bottom of the second largest canyon in the U.S. for hiking, biking, and Jeep or horseback rides. You can also see the musical drama “Texas” at the outdoor amphitheater in Palo Duro Canyon or visit the largest historical museum in Texas, the Panhandle-Plains Historical Museum. 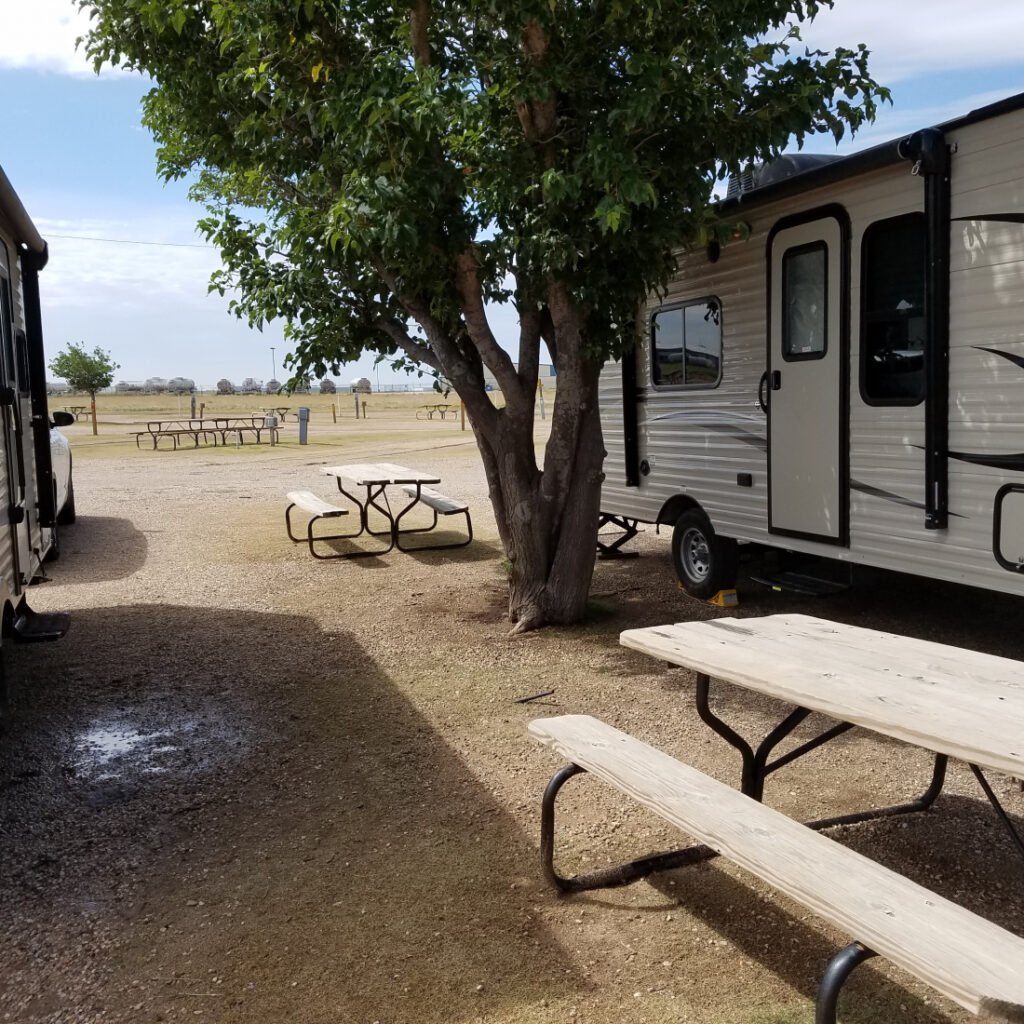 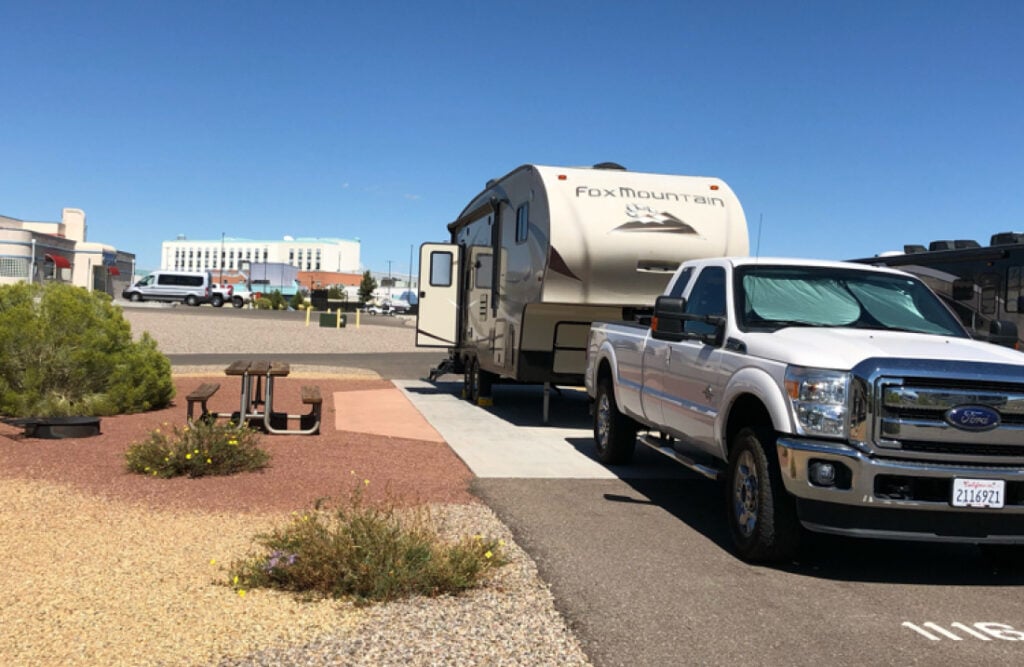 If you are wanting to see the Petrified Forest or Painted Desert, this is the perfect place to stay. Fossils that are found here indicate that natives inhabited this land some 10,000 years ago. It was also home to creatures such as dinosaurs and other ancient life forms. These sites are about a 20-minute drive from the park. You can also take a day trip to the Grand Canyon, Canyon de Chelly, Monument Valley or Fort Apache.

Stop at the Hubbell Trading Post on the Navajo Reservation or drive through Holbrook and see the Wigwam Motel, a museum of Historic Route 66 and the Hashknife Outfit, one of the west’s largest cattle ranches. 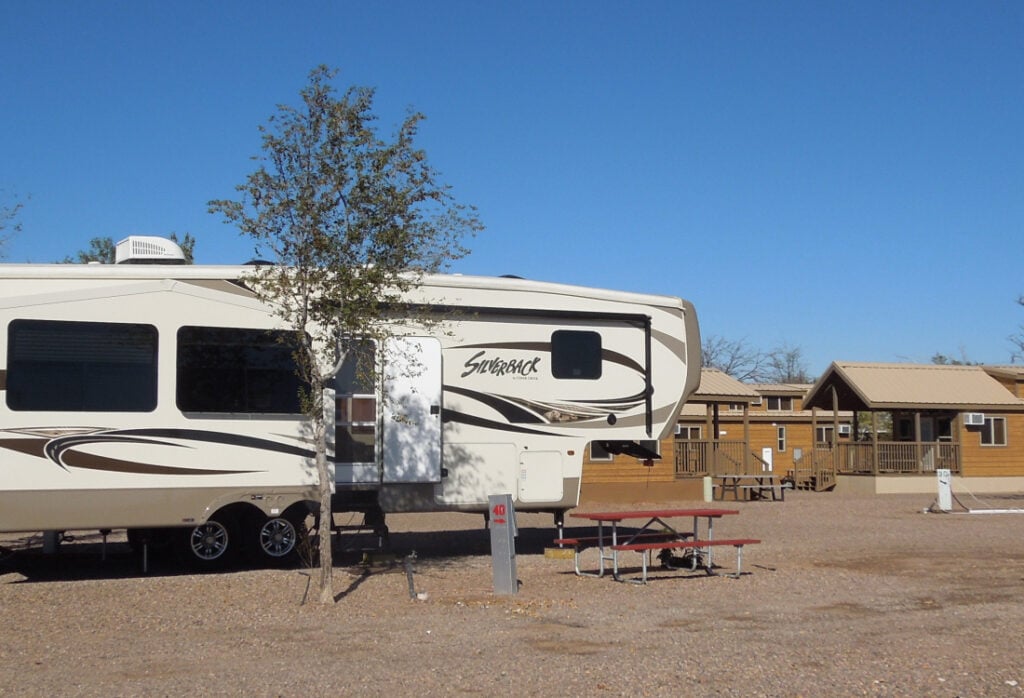 Delgadillo’s Snow Cap Drive-In, still run by the original owner’s family, features Juan Delgadillo’s idea to lure visitors. He sliced off the top of his 1936 Chevrolet hardtop and adorned it with trinkets and an artificial Christmas tree. This restaurant takes on a funhouse vibe with fake doorknobs and outhouse bathrooms behind the building. 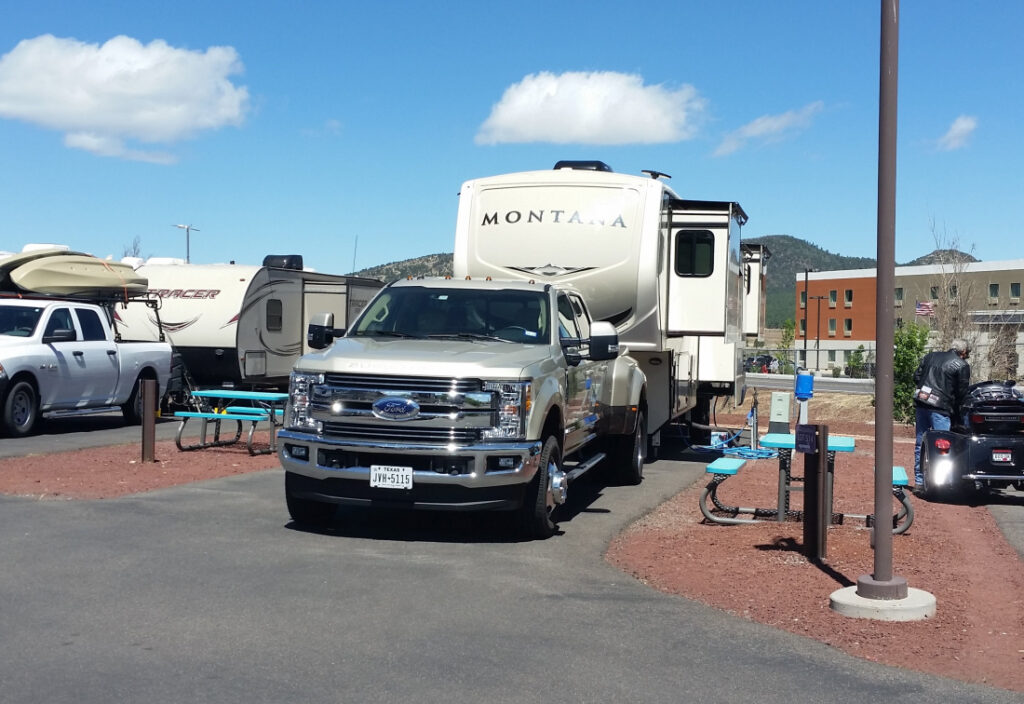 As your trip comes to an end, check out the Los Angeles/Pomona/Fairplex KOA with full hook-up sites, free Wi-Fi, a pool, hot tub, sauna, and tour shuttle to explore the area. Visit nearby Disneyland, Hollywood, Knott’s Berry Farm, Universal Studios and more.

Downtown Los Angeles was the original western terminus of Route 66, but the route was extended to Santa Monica in 1935. A sign at the end of the Santa Monica Pier marks the “End of the Trail” with a Ferris wheel, arcades, street performers, and plenty of restaurants and bars.

Also near the end of the route is the original McDonald’s Restaurant in San Bernardino. A museum marks the first restaurant. The restaurant does not serve the food that made it famous but showcases the rise of McDonalds from a small restaurant in the 1940s to what it is today.

Other features include a sign from the old McDonald’s a Hamburglar jail, Ronald McDonald Statues, and Route 66 plaques.

Of course, there are plenty more Route 66 RV parks along this historic cross-country route. Plan your trip with the RV LIFE Pro tools to get RV-safe GPS directions and to find more campgrounds and points of interest along the way. You may also want to check out these 18 Kick-Ass Places To Visit On Route 66 highlighted by Do It Yourself RV.

Been to a campground lately? Don’t forget to leave a review! Reviews help other RVers like yourself, and they help the campground. Leave a campground review today!

Terri and her husband, Todd, are full time RVers and work campers. They have been living full time in their RV for nearly two years with their Cavalier King Charles Spaniel, Newton, and currently reside in South Texas on the Gulf Coast. They hope to head west for the summer season. Writing is Terri’s passion but she also loves hiking, kayaking and anything she can do outside.